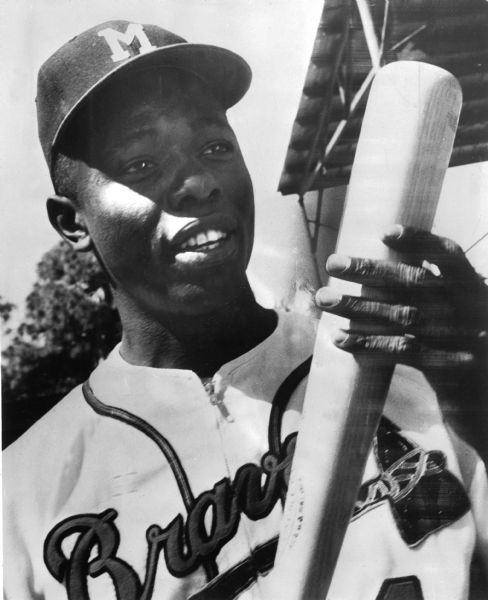 Henry Louis “Hank” Aaron became one of Milwaukee’s first major sports icons when he helped lead the Milwaukee Braves to their only World Series championship in 1957. Born in Mobile, Alabama, on February 5, 1934, Aaron began his baseball career with the Mobile Black Bears, a semi-pro team, at the age of seventeen. After briefly playing with the Negro American League’s Indianapolis Clowns, he signed with the Boston Braves in 1952. He was Rookie of the Year in the Northern League and MVP in the South Atlantic League before being promoted to the big league Braves in 1954, the year after they moved to Milwaukee. Wearing number 44, he would become one of the greatest professional baseball players of the 20th century.[1]

Nicknamed “Hammerin’ Hank,” Aaron was an offensive powerhouse for the Milwaukee and, later, Atlanta Braves. He accumulated 3,771 hits, 2,174 runs, 2,297 RBIs, and 755 home runs during his twenty-three seasons—among the top three all-time Major League Baseball (MLB) leaders in each category—and was named to a record twenty-five All Star teams between 1955 and 1975. Among the awards he received were: the National League MVP (1957), the same year the Braves defeated the New York Yankees in the World Series to earn their World Championship title; the National League batting title (1956 and 1959); and three Gold Glove awards (1958-1960) for his defensive skills in right field.[2] Aaron cemented his legacy as a power hitter when he hit his 715th home run in 1974, topping the record set by Babe Ruth nearly forty years earlier. Aaron’s career total of 755 home runs remained the MLB record for over thirty years. In 1975, Aaron returned to Milwaukee, when the Braves traded him to the Brewers. Aaron retired as a player in 1976 and was inducted into the Baseball Hall of Fame in 1982. The Milwaukee Brewers retired his jersey number in 1976, as did the Atlanta Braves in 1977.[3]

Hank Aaron remained close to the game after his playing career, working in the Braves’ front office and mentoring many of the players on the dominant Braves teams of the 1990s, which made the playoffs eight times and competed in the World Series five times. Aaron was named to the MLB All-Century team in 1999, the same year MLB Commissioner Bud Selig created the “Hank Aaron Award,” honoring the best hitters in the American and National Leagues each season.

Hank Aaron’s legacy in Milwaukee is evident through tributes at Miller Park, including a statue outside the stadium, his retired number, and a plaque at the site where his 755th home run ball landed.[4] However, his impact on the broader community is also commemorated with the Henry Aaron State Trail, a foot, cycling, and skating path that provides a continuous connection between Miller Park and the lakefront; Henry Aaron Field, a baseball stadium located in Glendale’s Lincoln Park; and the annual Hank Aaron 5k Run/Walk.[5] Aaron died on January 22, 2021.[6]