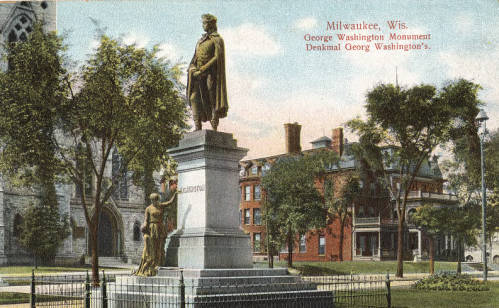 In its broadest sense, public art is an expression in art of any kind existing in public space. This entry describes only standing works of art in the open air. All public art is meant to encourage community engagement. It can include non-objects such as dance and theater; however, those expressions, as well as pieces integrated into architectural buildings and murals, are beyond the scope of this entry.

Public art in Milwaukee began with Native Americans in the Late Woodland era (scholars differ on its specific dates, but the Late Woodland era began between 200 and 500 AD and ended between 900 and 1300). The Indian peoples created burial mounds in the Milwaukee area and across the upper Midwest. Effigy mounds of birds, bears, panthers, and other animals populated the Milwaukee area.[1] Today there is little evidence of these mounds in or around Milwaukee, other than markers in the Wisconsin State Department of Natural Resources Woodland Preserve at State Fair Park in West Allis, in Lake Park in Milwaukee, and Lizard Mound County Park in Washington County.[2]

In the middle of the nineteenth century, immigrant craftsmen came to Milwaukee to work on church and commercial buildings. After Chicago’s World’s Columbian Exposition of 1893, talented artists from the East Coast and Europe came to Milwaukee looking for commissions. Artists’ training included skills to create monuments, as well as architectural details for commercial buildings, churches, and homes of the elite.

Milwaukee’s first bronze monument, George Washington, appeared in 1885 as part of the Court of Honor on West Wisconsin Avenue, given to the city by Elizabeth Plankinton. The artist, Richard Henry Park, sculpted Washington as Commander-in-Chief of the Continental Army, with every detail carefully captured in this realistic portrait celebrating the United States’ first hero. At his patroness’s urging, Park added a mother and child at the base of the pedestal. The two figures symbolized the education that would be needed for the thousands of immigrants arriving in the city during the late nineteenth century.[3]

The Court of Honor Civil War memorial, Victorious Charge, is the most important bronze in Wisconsin. Completed in 1898, its artist, John S. Conway, chose not to idealize war but to show war as a terrible struggle of five ordinary soldiers, including a dead comrade.[4] Other Milwaukee war monuments are more traditionally triumphal. In Milwaukee there are three equestrian monuments: General Thaddeus Kosciuszko, General Erastus B. Wolcott, and Baron Frederick Wilhelm von Steuben. Realistic bronze sculptures of people and topics relating to Milwaukee’s history followed, including works featuring Solomon Juneau, Leif Ericson, Henry Bergh, Christian Wahl, and Martin Luther King, Jr. Realism was the strongest artistic expression in Milwaukee in the nineteenth century and has continued through into the twenty-first century.

Abstraction in public art came late to Milwaukee and with great controversy. Citizens in Chicago expressed their displeasure over abstract art in the 1960s after the placement of a Picasso sculpture; however, today Chicago’s Picasso is often used as a logo for the city.[5] It was not until the 1980s that controversy over abstract art raged in Milwaukee. In 1981 the Milwaukee Art Museum commissioned an internationally recognized artist, Mark di Suvero, to create a sculpture titled, The Calling, consisting of forty-foot high, orange, steel beams. Sited at the terminus of East Wisconsin Avenue, ordinary citizens and city aldermen clashed with the museum because of The Calling’s prominent site and its abstract nature.[6] Although the tension between realism and abstraction continues today, scores of abstract sculptures have appeared in Milwaukee’s public spaces without much comment. A poignant work by Claire Lieberman, Holocaust Memorial, was placed at 1360 North Prospect Avenue in 1983 and garnered no controversy and little recognition.

Sculpture gardens have been important in Europe for centuries but they are a recent phenomenon in America; most sculpture gardens display monumental contemporary abstract sculptures. In the past the Milwaukee Art Museum (north of the museum) and the Peck Meat Packing Corporation in the Menomonee Valley mounted and later removed sculpture gardens. The most important remaining is the Lynden Sculpture Garden. Peg Bradley, a noted local art collector, bought and sited on her large estate sixty works by forty artists that accurately represented the major international sculpture movements of the 1960s and 1970s. Today the Lynden Sculpture Garden’s forty-acre site at 2145 West Brown Deer Road exhibits over fifty sculptures and is open to the public.[7]

Another recent public art development in Milwaukee is the RiverWalk, a continuous pedestrian walkway along the Milwaukee River from the Third Ward district to Caesar’s Park near Brady Street. In 1998 the Milwaukee RiverWalk District commissioned seven sculptors from Wisconsin to create works intended to be sited on the walk for a year. Since then, artists or owners have made some of the works permanent and over time more than seventy-five artists have presented their works.[8] The most visited work on the RiverWalk is the Bronze Fonz, commissioned by Visit Milwaukee in 2008. It depicts Henry Winkler, the actor who played Fonz in the television show Happy Days. Among the more notable public art works on the RiverWalk are Laureate, a textured metal sculpture by the nationally acclaimed artist, Seymour Lipton, commissioned in 1969 for the Performing Arts Center, and Acqua Grylli, a charming bronze river creature by Beth Sahagian commissioned in 2001 as part of the Neighborhood Millennium Arts Initiative.

National programs to foster art and artists had their beginnings in the Great Depression of the 1930s with the Federal Art Projects. Murals, paintings, and sculpture, along with other arts and crafts, were funded and encouraged by the federal government. New Deal art programs commissioned public art for post offices and courthouses everywhere, including Milwaukee. The Milwaukee County Courthouse murals are excellent examples of the artwork done during this period.

The National Endowment for the Arts established its Art-in-Public-Places Program in 1967, and Percent for Art programs in states, counties, and cities began in the 1970s. The city of Milwaukee began devoting up to one percent of the cost of capital improvements in public art in 1977, while Milwaukee County established a similar program in 2000. The Milwaukee Arts Board manages placement of works of art outside and within the city’s police stations, libraries, and new city buildings; the agency also leads an important conservation program. Although such programs give artists opportunities to bring their visions to site-specific public art and often feature community involvement, the populist approach has often resulted in the aesthetics of the bland. On other occasions, it has caused public controversy.

During an expansion of General Mitchell International Airport in 2003, for instance, the county’s Public Art Committee planned to mount a large work called the “Blue Shirt” by conceptual artist, Dennis Oppenheim. Milwaukee County Executive Scott Walker led a fight against the concept of the work of art; ultimately, it was removed from the airport plans. From that incident forward, the County’s public art program became extremely political; the Public Art Committee was deactivated in 2012 by County Executive Chris Abele, who moved public art funds to other areas of the budget. The county’s program funded a total of eighteen works of art.[9]

As of 2015, most of new public art in Milwaukee is commissioned by private individuals, suburban governments, non-profit agencies, or corporations. One impressive example is Wind Leaves, by Ned Kahn, sited on the lakefront in front of the Discovery World complex. This environmental sculpture, commissioned by an individual, provides interactive elements that delight visitors.[10] 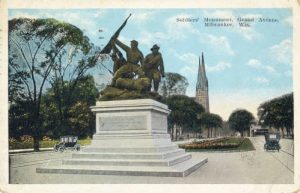 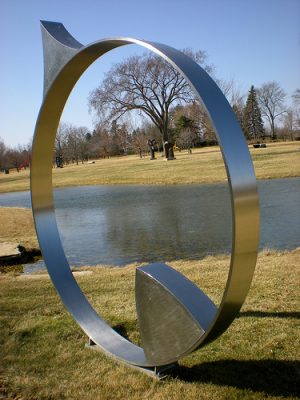 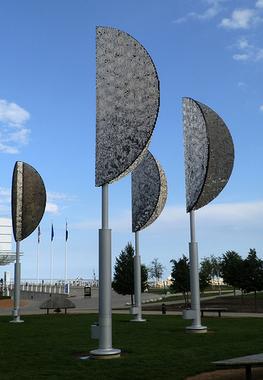