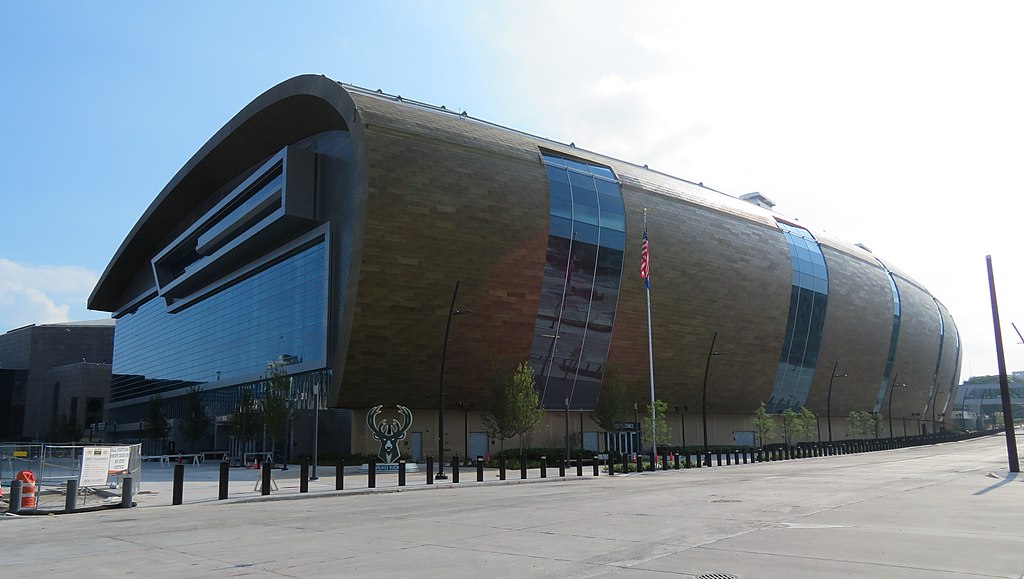 Opened in 2018, the Fiserv Forum is the home of the Milwaukee Bucks, Marquette University Men’s Basketball, and an array of other sports and entertainment events. It is located at 1111 Vel R. Phillips Avenue, directly north of the site of the BMO Harris Bradley Center, which it replaced as Milwaukee’s primary sports and entertainment arena. Construction started on the $500 million arena, funded half by Bucks team owners and half by state and local taxpayers, in June of 2016. Fiserv Inc., a Brookfield-based financial services company, purchased twenty-five-year naming rights for the 714,000 square foot, $524 million arena.[1]

The Fiserv Forum’s architectural design attracted considerable comment. On the exterior, weathered zinc panels bend around the north side of the structure over a glass atrium entranceway. The interior design uses reclaimed wood and Cream City brick, paying homage to what lead design firm Populous referred to as, “Milwaukee’s built heritage.” The Fiserv Forum’s environmentally friendly building techniques also earned it the title of the world’s first bird-friendly arena.[2]

The Fiserv Form is envisioned as the backbone for a thirty-acre entertainment block, formally known as the Deer District. It is the latest urban revitalization project attempting to create a tourism-centered cultural district Downtown west of the Milwaukee River. In the early 1980s, Milwaukee’s vision for downtown concentrated on a development known as the Milwaukee Brewery District, which never came to full fruition. The Fiserv Forum and the thirty-acre Deer District stand as the largest development project ever undertaken in downtown Milwaukee.[3] The Fiserv Forum was an integral piece in securing Milwaukee as the host city of the 2020 Democratic National Convention.[4] 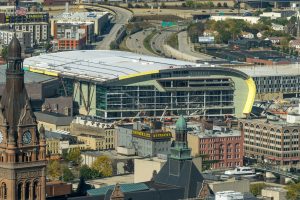 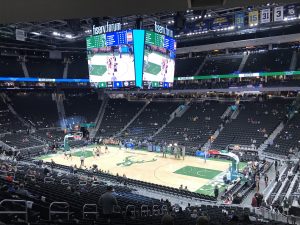