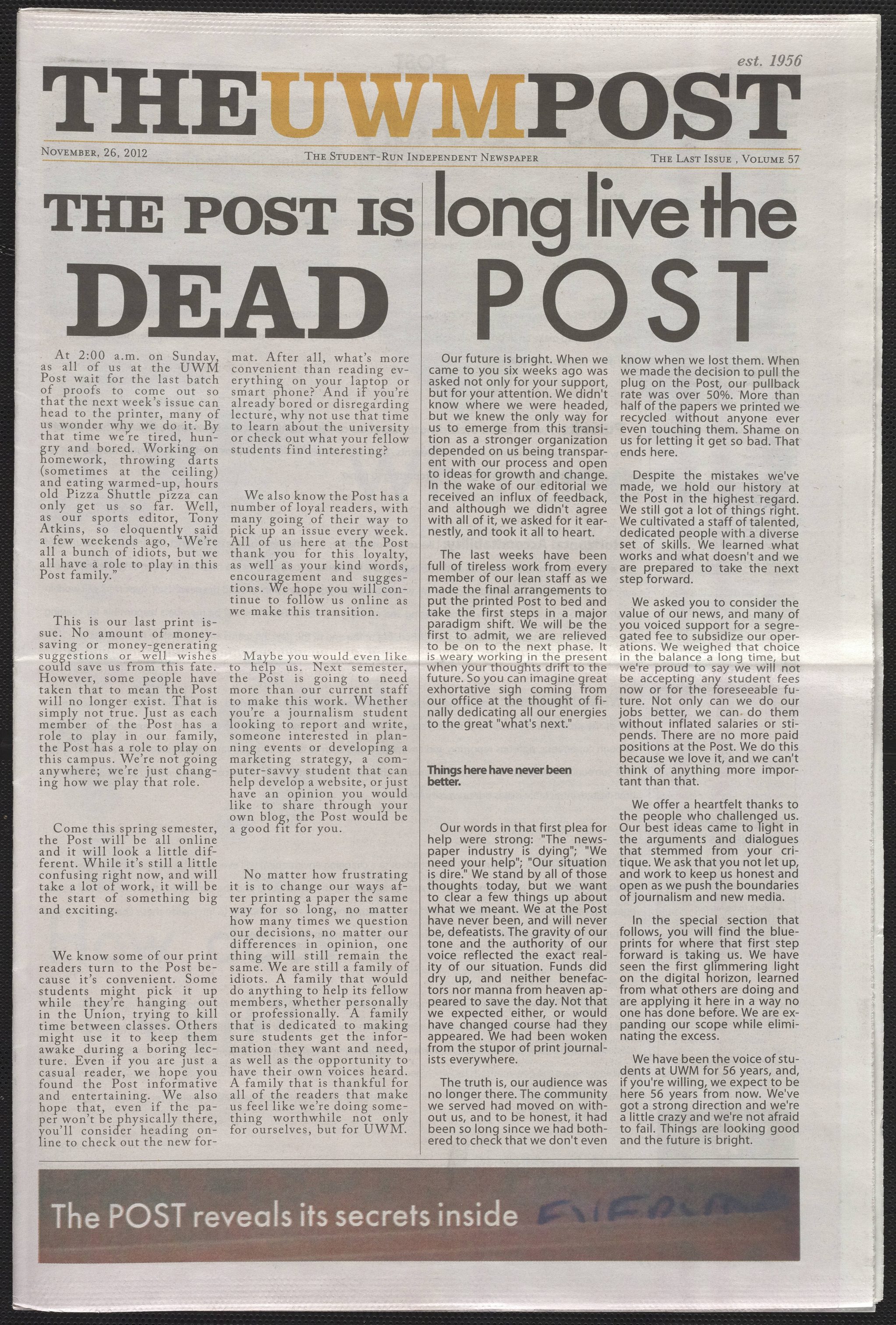 “Digital Milwaukee” is the online presence of metropolitan Milwaukee. It emerged with the opening of the Internet to commercial traffic and the advent of the World Wide Web as a system for visualizing, organizing, and disseminating digital content in the early 1990s.[1] The development of the Web has transformed how Milwaukeeans understand, discuss, share, market, and consume a wide range of information, goods, and services. In addition to the proliferation of personal computing devices and the emergence of broadband connectivity, the Web has also rendered navigating the millions of globally networked computers comprising the Internet an increasingly convenient, interactive, and customizable experience. From the region’s assorted governing agencies to its many public institutions, private businesses, media outlets, and social and cultural organizations, Digital Milwaukee has facilitated the convergence of area residents and interested parties around the world in ways that transcend accepted forms of communication, labor, knowledge-creation, and commercial participation.

Milwaukee has featured digital content on the Web since the early-1990s. However, domestic Internet use remained limited to residents who could afford the appropriate hardware and had the patience for connecting through low-speed dial-up modems. In 1997, only 22 percent of households in the metropolitan area accessed the Internet; that number rose to 42 percent in 1999.[2] Private telecommunications companies, like Ameritech Corporation (consolidated under AT&T Incorporated in 2006) and Time Warner Cable, brought high-speed Internet access to Milwaukee around the turn of the new millennium.[3] Ameritech’s Digital Subscriber Line (DSL) service, which utilized telephone lines, operated one hundred times faster than standard telephone modems upon installation.[4] So too did competitor Time Warner’s cable line modems.[5] Both vastly improved download times and online video playback. Time Warner Incorporated, now Spectrum, initially invested $250 million in a fiber-optic cable network spanning 9,000 miles in Southeast Wisconsin.[6]

In its infancy, Digital Milwaukee featured static websites that introduced users to the Web, supplied them with information, and pointed them towards further online resources. The city of Milwaukee launched its first website in 1996.[7] Among other features, the site provided residents with city email addresses and granted online access to property records, tax documents, and other government websites.[8] Public institutions, like the Milwaukee Public Museum (1995), Milwaukee Art Museum (1996), University of Wisconsin-Milwaukee (1996), and Milwaukee County Parks (1998), established digital homes around this time.[9] In 1998, the Milwaukee Public Library’s website admitted users to extensive databases, including its countywide catalog, and distinct web pages for children, young adults, and seniors.[10] It also played an important role in raising digital literacy, providing free onsite Web access and classes on navigating the Internet.[11]

Milwaukee businesses have used the Web as a tool for interacting with customers, selling products, engaging clients, and reducing transactional, communications, and production costs.[12] As early as 1995, roughly three hundred private businesses in the metropolitan area had established digital storefronts.[13] Early Internet service providers, like New Berlin-based Exec-PC Interactive, hosted websites on their own servers for a monthly cost, including the Green Bay Packers’ first virtual home.[14] Nonetheless, full-scale electronic, or “e,” commerce materialized gradually in Milwaukee, where few companies invested in the Internet market during the late-1990s “dot-com” boom.[15] However, information technology consulting firms proliferated in the region at the start of the new millennium as insurance, telecommunications, and manufacturing companies increasingly looked to optimize their business practices through digital commerce.[16] For example, industrial producers Rockwell Automation and Brady Corporation began investing millions of dollars in e-commerce projects in 2000. In addition to manufacturing and marketing goods, the firms used the Web to sell consulting services and publish human resources information.[17] Other Milwaukee businesses have relied on e-commerce to become national leaders in their respective industries, such as nursing home supplier Direct Supply.[18]

The largest news media company in Wisconsin, Journal Communications, swiftly recognized the Web’s social and cultural potential and has conformed to emerging trends in the transmission of online news. The Milwaukee Journal Sentinel launched digital services in 1995, when fewer than five percent of the U.S. public received their news on the Web.[19] At first, the newspaper replicated its print offerings on a static website combined with breaking news; special features; and weather, traffic, and stock updates.[20] As digital technologies advanced, JSOnline began introducing more images, audio, and video. Public media companies, like Milwaukee Public Television and Milwaukee Public Radio, and local broadcast television network affiliates TMJ4, CBS58, and WISN12 also developed early websites in this period.[21] Such media sites adopted “Web 2.0” features that allowed for enhanced user interactivity as the Web grew more collaborative and reliant on user-generated content in the mid 2000s.

Milwaukee’s smaller alternative, ethnic, and university newspapers have also taken advantage of the Web as an affordable electronic publishing platform that reaches a broad audience. Many of these publications, like The Shepherd Express, Milwaukee Catholic Herald, and the Marquette Tribune, appeared in print before introducing websites. Others, such as OnMilwaukee.com and The Milwaukee Drum, were “born-digital,” meaning they were created and are administered entirely in digital form. Wisconsin Gazette began in 2009 in both print and digital format.[22] Moreover, some digital newspapers, like the UWM Post, started out as print publications but now exist wholly online due to diminishing readerships and tight budgets.[23] America’s Black Holocaust Museum faced a similar fate in the cultural sector when financial problems forced its closure in 2008. The Web’s cost-effectiveness enabled the venerable institution to reemerge as a virtual museum in 2012.[24]

Milwaukee was an early proponent of free, publicly available high-speed wireless fidelity, or Wi-Fi, connectivity. In 2003, the city offered free Wi-Fi in select city parks.[25] Shortly thereafter, the public library announced free wireless Internet access in all of its locations.[26] Local start-up company Midwest Fiber Networks collaborated with the city to expand this initiative in the mid-2000s. They began working on a citywide wireless network intended to improve online access in underserved neighborhoods and attract more young professionals to the city. However, limited investment restricted the project to a small demonstration area on the city’s West Side.[27] Although publicly available citywide Wi-Fi has remained elusive, both free and fee-based wireless “hot spots” surfaced in Milwaukee’s hotels, restaurants, coffee shops, and other businesses once the technology was made available for commercial use.[28]

In the mid-to-late-2000s, Milwaukeeans joined the rest of the globe in communicating, connecting to, and sharing digital information and content on popular social networking sites like Facebook, Twitter, and Google+. Nearly all members of the Digital Milwaukee universe, from Urban Milwaukee to Radio Milwaukee to the Encyclopedia of Milwaukee website you are currently reading, have provided mechanisms for sharing their content on these and other social media tools. Everyday web users have even become digital content producers themselves via applications that perform web-logging, or “blogging”, functions, such as WordPress, Blogger, and Tumblr, and allow for the uploading of images and video to sites like Flickr and YouTube. Locally operated digital agencies, such as Stark Media, Regal Creative, Layer One Media, and others, have improved the look, feel, and utility of Digital Milwaukee, creating responsive, cross-platform designs and performing a range of digital services for individuals, businesses, and public institutions, from social media marketing to branding consultation to mobile app development.[29] 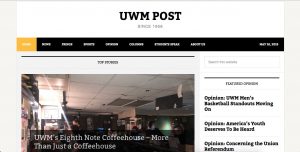