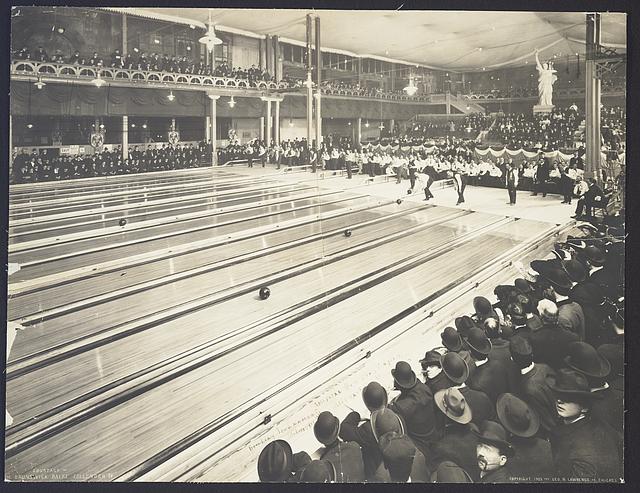 The game of tenpins, or bowling as it is more commonly known, has been associated with Milwaukee since German immigrants began arriving in the Midwest before the Civil War.

Bowling took many forms before it was popularized as the game of tenpins. It has been said that, during the third and fourth centuries, German Christians carried a club, or “kegel,” for protection. It resembled an Irish shillelagh and came to symbolize the “heide,” or heathen. Christians would plant their kegel in the ground and toss stones at it. If the kegel was knocked over, the individual was believed to have a pure Christian soul.[1]

Over time, the stone was replaced with a wooden ball and Europeans replaced the kegel with nine “skittles”—14-inch high pins made from birch that weighed eight pounds each and were arranged in a diamond shaped 1-2-3-2-1 pattern. The pins were placed at the far end of an “alley,” which was one plank measuring a foot and a half wide and up to 90 feet in length. This form of “bowling” was popular at German outdoor cultural events during the Middle Ages.

During the 1800s, bowling evolved into the game of tenpins. As waves of German immigrants began migrating from the East Coast to the Midwest and settled in Milwaukee, bowling remained their favorite sporting activity, but the game lacked standard alley sizes and pin weights. Consequently, club leaders in New York called for a convention at Beethoven Hall in New York City on September 9, 1895 to establish a national membership organization that could administer uniform rules for the sport. It became the American Bowling Congress (ABC).[2]

Among the gentlemen invited to attend the 1895 convention was twenty-two-year-old Milwaukeean Abraham Lincoln “Abe” Langtry. He was co-owner of the Langtry-McBride Alleys, which occupied three floors of a downtown office building at Second and Wisconsin.

Considered one of the most successful bowling proprietors in the Midwest, Langtry used his influence with the ABC to land Milwaukee its first ABC national tournament at the Milwaukee Exposition Center in 1905. In March 1907, the ABC made a historic move by electing Langtry secretary of its national organization. At the time the ABC was administered from whatever city the secretary lived in, so Langtry began running the ABC from his roll-top desk in downtown Milwaukee.[3]

In 1907, ABC membership numbered 6,000. Langtry remained secretary for the next 25 years until failing health forced him to step down in 1932. By that time ABC membership had grown to more than 215,000, and the ABC had made Milwaukee its permanent home.

Bowling was popular among Milwaukee housewives as well. Jeannette Knepprath emerged as a strong proponent for developing the Milwaukee Women’s Bowling Association (MWBA), which received a charter from the Women’s International Bowling Congress on December 12, 1919. The MWBA instantly became the largest local women’s association in the country, with 141 members. Knepprath was also instrumental in founding the Wisconsin Women’s Bowling Association in 1920 and was elected president of the Women’s International Bowling Congress in 1923, a position she held for the next forty-six years.

Along with administrative leaders, Milwaukee bred many of the sport’s greatest bowlers of the 20th century. The first was Enrico “Hank” Marino, who was born in Italy in 1889 and arrived in Milwaukee, via Chicago, in 1930. He managed sixteen alleys in the Carpenter Building on 5th and Wisconsin until his retirement in 1964.[4]

During the 1930s, when team bowling was at its height, Marino surrounded himself with other talented Milwaukee bowlers—Ned Day, Charlie Daw, Gil Zunker, Elmer Koch, and Fred Lorenz—to form the Heil Products team. They were sponsored by German-born industrialist Julius Heil and became National Match Game champions, earning them the privilege of representing the U.S. in the 1936 Berlin Olympics. In 1951, Marino was voted the greatest bowler of the first half of the twentieth century by the National Bowling Writers’ Association.[5]

Many of Milwaukee’s championship caliber bowlers became household names because of the local television show called “Bowling with the Champs.” Beginning in 1955, “Champs” was televised Sunday mornings on WTMJ TV for 40 years.[6] Qualifying for the show peaked in popularity with over 3,700 male and female entries in 1982.[7]

Milwaukee also played a key role in the fortunes of the Professional Bowlers Association Tour when the Miller Brewing Co. signed on a tournament sponsor in 1966. The Miller High Life Open—later renamed the Lite Beer Championship—remained a prominent stop on the PBA Tour until Miller Brewing ended its sponsorship in 1989.[8]

For decades, bowling proprietors were dominated by generations of families such as Kuglitsch, Scherbarth, Strachota, Krueger, Deuster, Petroff, and Posnanski. Milwaukee’s bowling landscape experienced dramatic growth in 1958, however, when brothers Bernie and Harold Sampson opened an establishment in Wauwatosa that eventually had seventy-two lanes. Red Carpet Bowlero, as it became known, dwarfed most of the family-run alleys in Milwaukee—none which was larger than twenty-four lanes. The Sampsons hired Dick Richards to oversee Red Carpet Leisure Industries as their ownership of bowling centers in Milwaukee and surrounding communities expanded to ten with a total of 500 lanes during the next twenty years.[9]

In March 1971, the ABC joined forces with the WIBC to construct a spacious two-story headquarters in suburban Greendale. The ABC, WIBC, and Young American Bowling Alliance (YABA) moved into Bowling Headquarters in September 1972, at the time serving 7.4 million sanctioned adult bowlers and 720,000 youth bowlers nationally.[10] The three organizations merged into the United States Bowling Congress in 2005 and continued to provide membership services until departing for Arlington, Texas, in 2008.

Bowling’s popularity continued to grow through 1980, when the ABC and WIBC featured a combined 9 million members. Milwaukee alone had more than 100,000 sanctioned male and female bowlers.[11]

The last new center to open in the Milwaukee area was Root River Lanes in 1981. Since then bowling has been a victim of changing demographics, triggering a decline in sanctioned league membership and the closing of many centers. By 2014, the number of men and women bowling in sanctioned Milwaukee area leagues had dwindled to just over 12,000 in twenty-nine centers.[12] 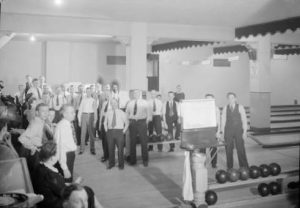