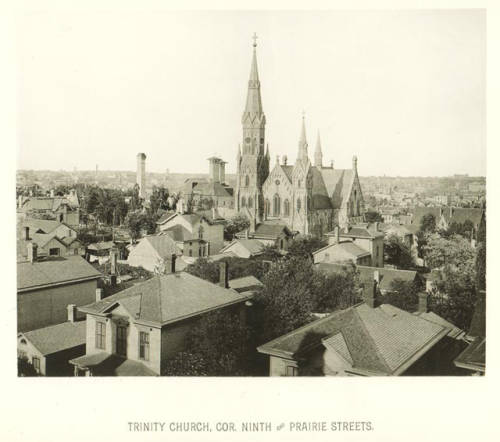 Standing at the corner of North 9th Street and West Highland Avenue in downtown Milwaukee, Trinity Evangelical Lutheran Church has been called the “Mother Church of Missouri Synod Lutheranism” in Milwaukee.[1] Designed by German immigrant Frederick Velguth for Milwaukee’s oldest German Lutheran congregation, the Victorian Gothic structure, completed in 1880, is recognized as a municipal landmark (1967) and state historical landmark (1979) and is included on the National Register of Historic Places (1979).[2] At its peak in the early twentieth century, Trinity counted about 1,600 members.[3] While the neighborhood surrounding the church has changed from residential to industrial and institutional, Trinity remains a community of roughly 175 baptized members drawn from across the Milwaukee metropolitan area.[4]

Dedicated on April 11, 1880, Trinity’s Victorian Gothic building features local craftsmanship and materials.[8] The building’s edifice, above a limestone foundation, is made of Milwaukee’s famous Cream City brick while the interior woodwork is hand-carved Wisconsin oak and ash.[9] When the building was completed, the construction costs totaled $43,500, including $3,500 for the organ.[10] This instrument, with 34 registers and 1600 pipes, is included on the National Register of Historic Places in its own right. In May 2018, a devastating fire roared through this iconic church, collapsing the roof and one of its steeples. The future of the remaining structure is currently under review. 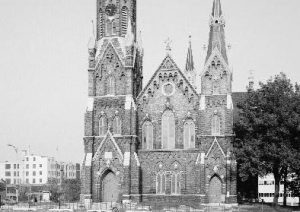 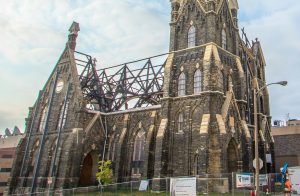