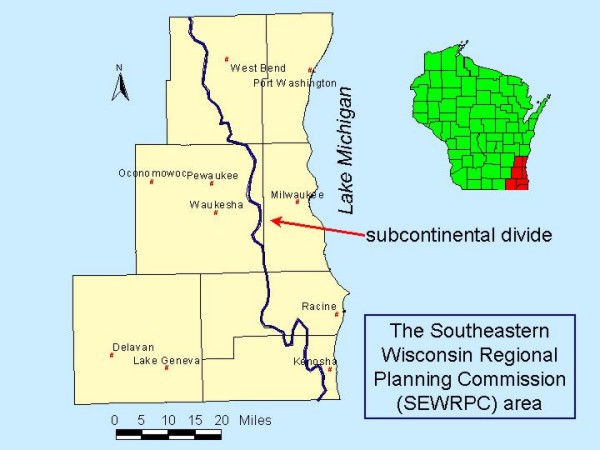 A ridge created by the thawing Wisconsin glacier 10,000 years ago traverses eastern Waukesha County from north to south near the Milwaukee County line. It is a small segment of the Great Lakes Basin boundary, which encompasses all of Michigan and parts of Illinois, Indiana, Minnesota, New York, Ohio, Pennsylvania, and Wisconsin, and the Canadian provinces of Toronto and Quebec. In 2017, the basin held 84 percent of North America’s and 21 percent of the world’s fresh surface water, as well as 30 million people, or 10 percent of the US population and 30 percent of Canada’s.[1]

The ridge is known in southeastern Wisconsin as the Subcontinental Divide. Water that falls east of the ridge enters Lake Michigan and flows through Lakes Huron, Erie, and Ontario and the St. Lawrence River to the North Atlantic Ocean. Water on the west face flows into waterways that eventually join the Mississippi River and the Gulf of Mexico.[2]

Communities turned to the Great Lakes for drinking water from the beginning, but as the population expanded, efforts to protect the quantity and quality of the water in the region intensified. In 2008, Congress created the Great Lakes-St. Lawrence River Basin Water Resources Compact of the eight Great Lakes States governors, with power to regulate basin water use. Since most of the population growth in Waukesha County took place in the western part of the county, the Divide became politically and ecologically important in the 2010s.[3]

In 2016, after years of study and controversy, the compact council approved the City of Waukesha’s application to import 8.2 million gallons of Lake Michigan water from the City of Milwaukee and return it treated to the lake through the Root River.[4]