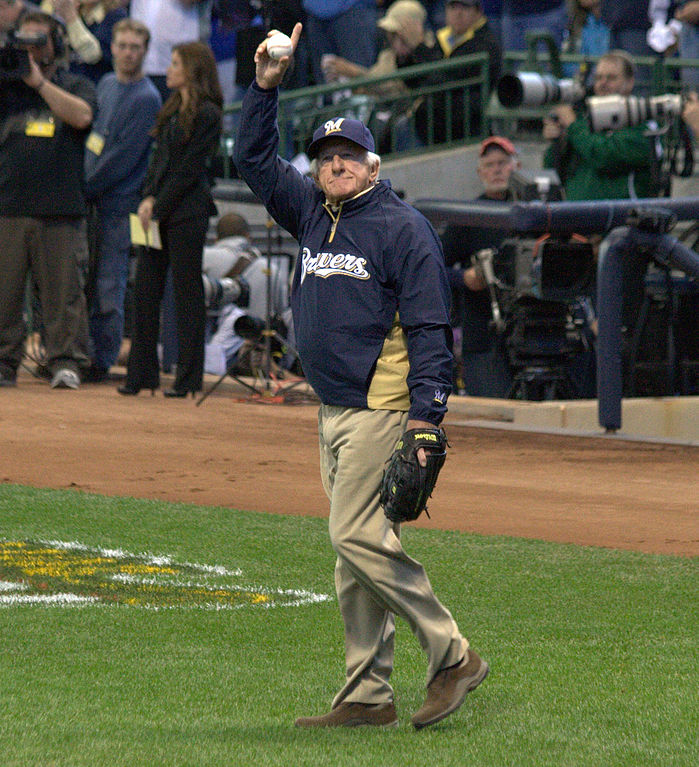 Robert George “Bob” Uecker is best known as a Milwaukee Brewers’ radio broadcaster, but he also has gained fame as a national baseball commentator, actor, author, and commercial spokesman. Born in Milwaukee on January 26, 1935, Uecker grew up watching the minor league Milwaukee Brewers at Borchert Field and aspired to a professional baseball career. The Milwaukee Braves signed Uecker in 1956, and he made his major league debut as a catcher in 1962. After stints with the St. Louis Cardinals and Philadelphia Phillies, which included a World Series title in 1964, Uecker returned to the Braves in Atlanta, where he retired from his playing career in 1967. Despite his mediocre statistics as a player, Uecker nevertheless gained fame as “Mr. Baseball,” relating humorous stories from the broadcast booth about his playing days, teammates, and life on the road. Uecker’s experiences as a player are the foundation for many of the stories and jokes he continues to tell in his fifth decade as a baseball broadcaster and entertainer.

Uecker returned to Milwaukee after his playing career and joined the Brewers’ radio team in 1971. Uecker revealed a natural talent for play-by-play announcing, as well as entertaining audiences with tales from his playing days. He soon gained national fame as a commentator for ABC and NBC baseball broadcasts, was featured in a series of national commercials for Miller Lite beer, and hosted syndicated television sports programs. Uecker published his autobiography, Catcher in the Wry, in 1982. Uecker’s popularity continued to grow as he made about 100 appearances on The Tonight Show with Johnny Carson, hosted Saturday Night Live in 1984, announced several World Wrestling Federation (now WWE) matches in the late 1980s, and pursued an acting career. Uecker’s most famous roles were as George Owens in the 1980s television sitcom Mr. Belvedere and as baseball announcer Harry Doyle in Major League (1989) and its sequels, Major League II (1994) and Major League: Back to the Minors (1998).[1]