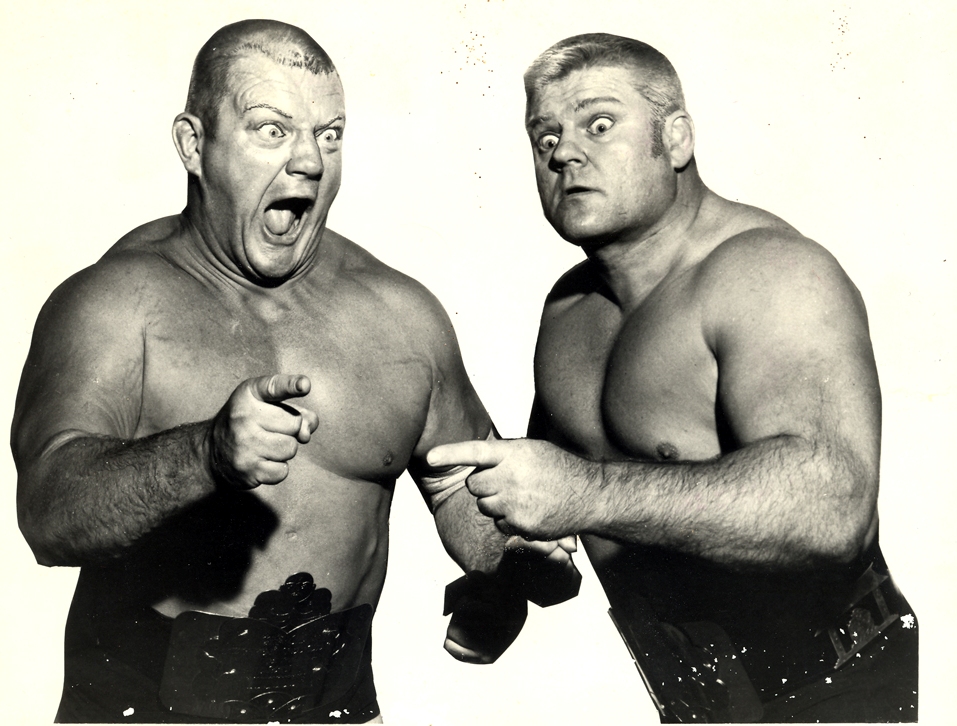 Professional wrestling, distinguished from other forms of wrestling by its tacit fakery and showmanship, has provided performance art for the masses in Milwaukee for more than a century.[1]

The modern American pastime emerged as a spectator sport in the second half of the nineteenth century as strongman acts in touring carnivals.[2] These small-time shows looked to provide entertainment, rather than genuine competition, and wrestlers crafted stage personas in hopes of building their reputations and to attract audiences.[3] An alliance developed between wrestlers and promoters during the early twentieth century, and the matches, still viewed as true athletic competitions, became major attractions by the 1920s. This was the era when Wisconsin-born Ed “Strangler” Lewis became a household name across the nation and appeared on wrestling cards in Milwaukee.[4] Behind the scenes, the powerful Gold Dust Trio promotional group—which included Lewis—helped transform wrestling into a vaudevillian spectacle where monetary interests determined outcomes, eroding any remaining legitimacy in the activity.[5] Fan interest grew in Milwaukee, where German-born favorite Ernst “der Ernst” Scharpegge and his signature “facelock” maneuver drew sellouts crowds at the Milwaukee Auditorium and the Eagles Clubhouse in the 1920s and early 1930s.[6] However, the popularity did not last. In the early 1930s, a drunken reporter in New York revealed the results of the next day’s match, exposing the deception that went to the heart of the pastime.[7] This incident, along with the Depression, helped diminish wrestling’s place in the national consciousness until the television age.[8]

Reggie “The Crusher” Lisowski and Dick “the Bruiser” Afflis headlined pro wrestling’s resurgence in Milwaukee in 1950s and 1960s.[9] The Crusher began wrestling while stationed with the U.S. Army in Germany and launched his career in Milwaukee at the Eagles Club in 1949.[10] He went on to join Verne Gagne’s American Wrestling Association (AWA) in 1963.[11] Known as the “Man Who Made Milwaukee Famous,” The Crusher’s South Milwaukee, working-class credentials earned him many fans.[12] His work as a bricklayer early in his career, along with photographs of the wrestler drinking beer before matches, helped cultivate his everyman image.[13] In the 1960s, he teamed up with The Bruiser (William Fritz Afflis), a former Packers lineman, to win several world tag-team championships.[14]

Wrestling maintained its popularity in Milwaukee through the 1970s and 1980s, with matches selling out the Milwaukee Auditorium and drawing more than twelve thousand to the Milwaukee Arena.[15] The AWA gave way to World Championship Wrestling and the World Wrestling Federation in the 1980s, and by the late 1990s these two associations battled for cable television supremacy.[16] The search for viewers led to increasingly adult-themed shows that drew high ratings for pay-per-view matches that brought viewers into local taverns and sellout audiences to the Milwaukee Arena.[17] During this lucrative period, thousands of local wrestling fans dialed Milwaukee’s free Pro Wrestling Hotline, which provided gossip from the world of wrestling, and Milwaukee beverage company King Juice created wrestling-branded sports drinks.[18]

While big league pro wrestling drew crowds to the Bradley Center, several semi-professional organizations also emerged in Milwaukee during and after the late 1990s resurgence.[19] Mid-American Wrestling promoted smaller matches at the Rave and at the Knights of Columbus Hall in West Allis, sometimes with barbed-wire ring ropes that reflected contemporary pro wrestling’s brutality.[20] Great Lakes Championship Wrestling began putting on local shows, including some at Texx’s Victory Hall in Cudahy, which often featured a pro with national appeal taking on a local wrestler.[21] In 2008, local promoters Andrew Gorzalski and Jay Gilkay staged the first annual “Mondo Lucha Variety Show” at Turner Hall Ballroom that combined Mexican Lucha Libre wrestling, burlesque, live music, and freak-show shock.[22] These events continue to function as a sort of everyman’s performance art, though perhaps without the fame and fortune associated with the major companies and their television contracts.