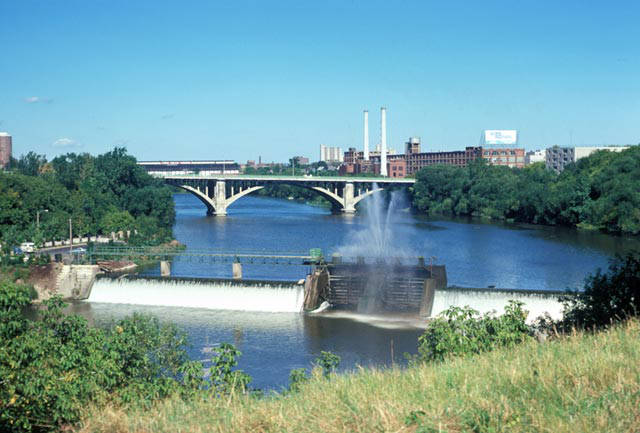 The RiverWalk is a pedestrian walkway along the Milwaukee River in downtown Milwaukee. Socialist city planners first envisioned the RiverWalk in the early 20th century, and a segment was built outside the Gimbels Department Store in the late 1920s.[1] In the 1980s, Mayor Henry Maier revived the idea and pushed for a connected system of pedestrian walkways along the river.[2] In 1985, the Greater Milwaukee Committee and the City of Milwaukee rebuilt the Gimbels segment.[3] Other riverfront property owners built their own segments.[4] A completion plan requested by the Wisconsin Department of Natural Resources helped ensure compliance with the public trust doctrine, which mandates public access to waterways.[5]

In 1993, Mayor John Norquist’s $9.7 million “RiverWalk Initiative” guided the construction of a walkway from Clybourn Street to Pleasant Street on the west bank of the river and to Highland Avenue on the east bank.[6] The RiverWalk helped attract investors who constructed numerous nearby apartment buildings and restaurants, among other new commercial activity.[7] This success allowed Norquist to expand the RiverWalk into the Historic Third Ward and along Commerce Street.[8]

Today the RiverWalk has three main segments. The original segment follows the river downtown. The Historic Third Ward Segment, the southernmost portion, was completed in 2004 and won a design award in 2007.[9] The northern section of the RiverWalk, the Beerline “B” segment, follows a former industrial rail line from North Humboldt Avenue to East Pleasant Street.[10] RiverSplash, a festival centered on the RiverWalk, was held annually between 1989 and 2009.[11]