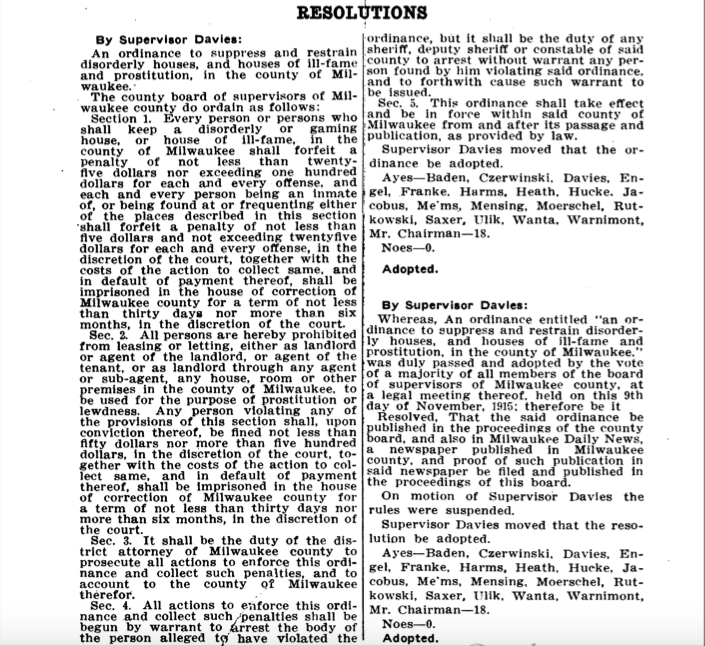 Trading cash for sex, either with streetwalkers or at brothels, is a practice as old as Milwaukee itself and, despite law and crusades against it, survives to this day, primarily men buying sex from women.[1] The earliest references to prostitution in Milwaukee date back to the early 1850s, as articles appeared in the Milwaukee Sentinel about efforts by the Common Council to force prosecutions against “houses of ill-fame.”[2]

Many of the early raids on houses of prostitution were conducted in the blocks clustered around the Milwaukee River, in present-day downtown, near the city’s largest hotels and nearby to the riverside cargo docks, mills, and factories. By the mid-1870s, “River Street” became a shorthand for this area. While the actual River Street (Edison Street today) was home to a number of brothels, the city’s red light district made up a much larger area, running the length of River Street and extending several blocks to the east. [3] By this time, a number of brothels had also taken root west of the river, clustered along West Wells Street.[4]

Although large-scale efforts were made in the 1880s to clean up these areas,[5] the appointment of John Janssen as chief of police in 1888 began a twenty-plus year era in which city official mostly allowed the brothels of the area to operate without consequence.[6] In this regard, Milwaukee was not unlike many other major American cities, where unofficial red light districts were able to prosper without interference from the law.

In 1912, a reform-minded Socialist administration was able to, at least temporarily, shut down the city’s downtown prostitution trade.[7] However, according to a 1914 state investigation into vice conditions in the state, these actions had little long-term effect, saying that prostitution had returned to the area and was operating as openly as ever.[8]

The “closing” of the downtown red light district seemed to take the prostitution issue out of news until World War II, when the FBI stepped in to help combat prostitution around Milwaukee area army bases. The issue of national interest was the spread of venereal disease, which was allegedly robbing the army of able-bodied men.[9]

In the post-war years, prostitution lingered in west of the river downtown for several decades. By the 1970s, streetwalking was a plague on the area.[10] Beyond downtown, the city’s north side—along 27th Street between Wells and State streets and along North Avenue between 28th and 35th Streets—also became home to an active streetwalking trade.[11]

Prostitution in Milwaukee’s suburbs also existed, though with a somewhat different character. Informal arrangements in taverns offered sites for men to find prostitutes, and some motels offered convenient locations for the trade. Rarely however, was such behavior prosecuted, with sporadic mentions in the media of particular locations or a notable arrest.[12]

Into the 1990s and 2000s, street prostitution had spread into a number of neighborhoods on the west and south sides of the city, and the Internet, used as a means of arranging encounters in hotels and nightclubs, provided new mechanisms for facilitating the trade.[13]