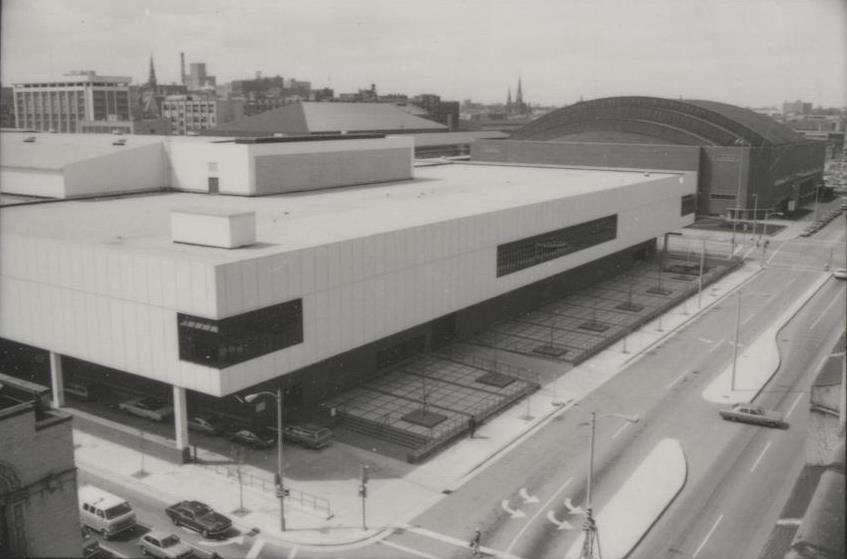 The Milwaukee Exposition and Convention Center and Arena (MECCA) stood in Milwaukee’s Civic Center district on West Kilbourn Avenue for 24 years. It opened in 1974 adjoining the Auditorium/Arena complex and was replaced with the larger, more modern Midwest Express Center (now the Wisconsin Center) in 1998.[1]

The efforts to construct the convention center began in April 1967 with the publication of a report by a committee headed by Robert E. Dineen, Board Chairman of Northwestern Mutual Life. The report called for the construction of a large, modern exhibition hall built near the existing Arena on West Kilbourn Avenue The design for the facility, by the Chicago firm of Welton Becket & Associates, planned a two-level structure built on the two blocks between Wells, Kilbourn, Fourth, and Sixth Streets. The main floor exhibition space covered 132,000 square feet, including a Great Hall of 66,000 square feet.[2] The second floor consisted of additional conference space and meeting rooms with a cantilevered roof.[3] A skywalk system connected the building with the Auditorium/Arena; another skywalk was added in 1983 to the Hyatt Hotel to the east.[4]

Groundbreaking for the building was held on December 8, 1971. The grand opening of the completed structure was held on May 23, 1974[5] and included almost 250 ethnic dancers performing during four days of celebration.[6] Annual events such as the Sentinel Sports Show, the Holiday Folk Fair International, and the Auto Show helped to keep MECCA an important downtown destination.[7]