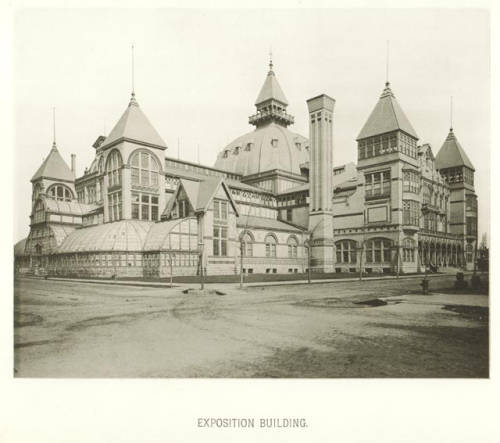 Preceded by the city’s oldest skating rink,[1] the Milwaukee Exposition Building opened at what is now 500 W. Kilbourn Ave. in 1881.[2] Walter Holbrook of E.T. Mix Co. Architects[3] designed the building, which was constructed with Milwaukee brick in the modified Queen Anne style.[4] It was constructed entirely with private funds[5]—when a worker’s strike stalled construction, John Plankinton wrote a $70,000 check to meet their demands.[6] Milwaukeeans regarded it as the city’s crown jewel and the best exposition center in the nation.[7] The Exposition Building was destroyed by fire during a skat card tournament on June 4, 1905,[8] the cause of which was never determined.[9] After a legal battle for the land,[10] it was replaced by the Milwaukee Auditorium.

“Good for the Convention.” The Milwaukee Journal. December 5, 1891.