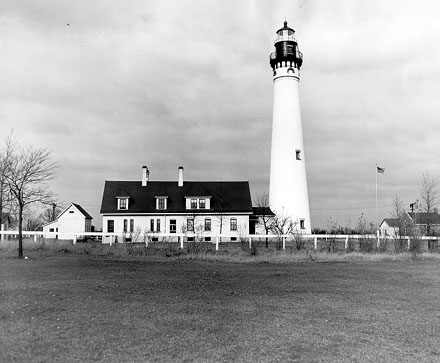 Built in 1838, Milwaukee’s first lighthouse was intended to mark the entrance to the Milwaukee River.[2] But because it stood nearly a mile north of the river (near present day Wisconsin Avenue and Prospect Avenue), its light offered mariners little help.[3] Built in 1839, Racine’s first lighthouse marked the entrance to the Root River. The Racine Public Library is today located where the lighthouse’s 40-foot Cream City brick tower once stood.[4]

In 1855 the North Point Light Station was built atop a bluff in Milwaukee’s modern Lake Park.[5] Its original Cream City brick tower was replaced in 1888 by a 39-foot cast-iron tower. The installation of a Fresnel lens, which dramatically improved the strength of its lamp, made the station’s light visible for nearly 20 miles.[6] Among the residents of the attached house was Georgia Green Stebbins, who served as North Point’s keeper from 1874 to 1907.[7] In 1912 the tower was placed atop a new steel structure, bringing the light’s height to 74 feet.[8] In 1994 North Point was removed from service, prompting historic preservation efforts.[9] Since 2007 the facility has served as a museum, housing a variety of artifacts including North Point’s last Fresnel lens.[10]

Built in 1860, the Old Port Washington Lighthouse was set atop a Cream City brick house. Light from its tower was visible for nearly 20 miles.[11] From 1874 to 1924, members of a single family—Captain Charles H. Lewis, Mariah Prosser Lewis, and their son Charles Lewis Jr.—lived at the house and served as its keepers.[12] Since 2000 the facility has undergone extensive renovations. The house has been converted into a local history museum.[13]

Built in 1880, Wind Point is one of Wisconsin’s oldest still-operating lighthouses. Located several miles north of Racine Harbor, Wind Point’s tower stands 108 feet. Its original kerosene-fueled lantern was replaced by two Fresnel lenses, one of which was visible only when mariners from the southeast were headed directly towards the treacherous Racine Reef. Since 1997 the Village of Wind Point has owned the facility. The beacon within is still maintained by the Coast Guard, while a local non-profit organization manages the lighthouse grounds.[14] 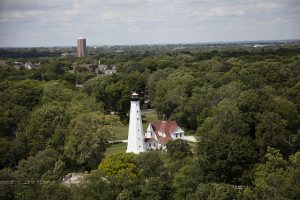 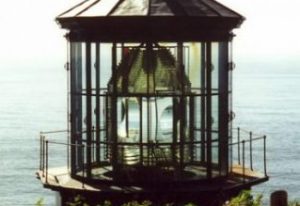