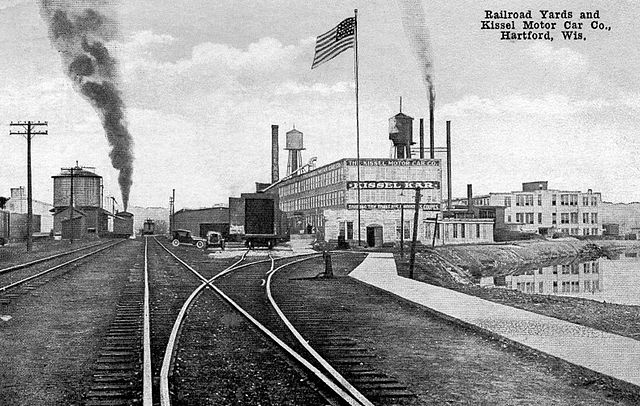 Once a remote trading site along the Rubicon River inhabited by Potawatomi and Menominee peoples, Hartford has evolved over the past two centuries into a bustling center of industry, recreation, and civic engagement. The Town of Hartford was incorporated as the Town of Wright in 1846. The Village of Hartford incorporated in 1871 and became a city in 1883.[1] Today, the city of Hartford and the independent town of Hartford surrounding it span Washington and Dodge counties to Milwaukee’s northwest.

Spurred by advertisements for arable farmland, settlers like James and Charles Rossman, Timothy Hall, and E.O. Johnson founded Hartford’s earliest businesses, including a gristmill, tavern, and hotel.[2] Agricultural production defined the town’s first retail establishments, from equipment wholesalers to general merchandisers to dry goods dealers.[3] Hartford’s Main Street commercial district retains many of the two-to-three story frame structures housing these original enterprises.[4] To better transport wheat and produce to distant markets, workers began laying track in 1855 for the Milwaukee-La Crosse railroad, which powered Hartford’s economy through the early 1900s. Farmers personally invested in the railroad, though many went bankrupt after salespeople convinced them to purchase faulty stocks secured by their own mortgages.[5] In reaction, farmers created the Hartford Home League which argued against foreclosures and to protect farmers from exploitative railroad practices.[6]

Hartford residents enjoyed a variety of sports and recreational activities. The Hartford Athletic Club held parades, hosted picnics, and organized baseball games and bicycle outings. German-American residents founded a Turner society in 1873. In the 1920s and 1930s, residents established clubs that focused on sportsmanship and conservation, like a chapter of the Izaak Walton League and Community Conservation Club.[11] Hartford also featured a regional baseball team that played in Wisconsin’s Land O’Lakes League.[12] Such activities remain vital to the city of Hartford’s growing middle-class population of approximately 14,200 residents, up from 10,900 in 2000 and 8,200 in 1990.[13]