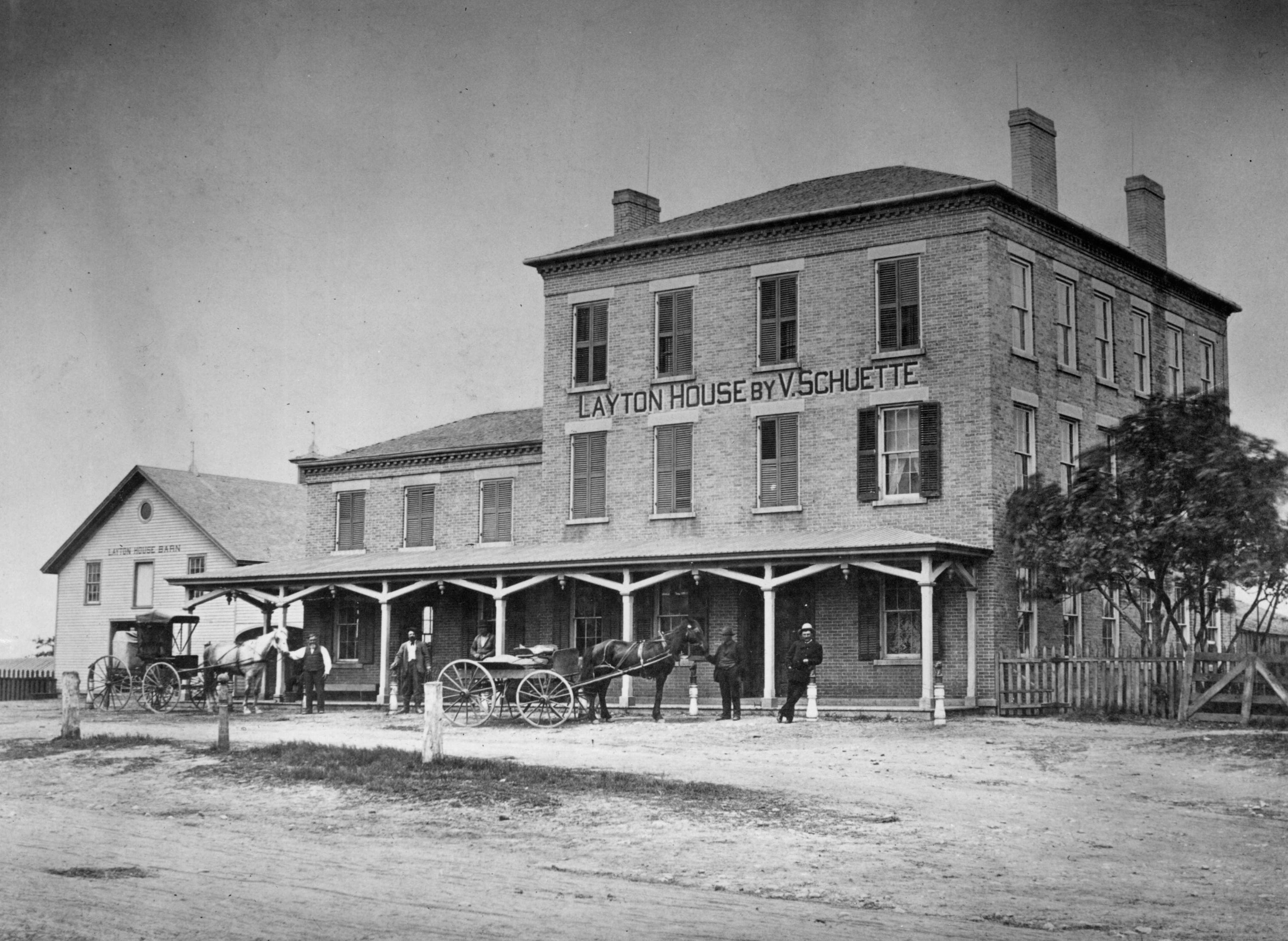 Members of the Hale family from New York State were the area’s first white settlers in the 1830s. Seneca Hale arrived in 1836, followed by his brother, William, and father, Ebenezer. The Hales obtained the ownership rights to three-quarters of the land that now surrounds Highway 100 and Janesville Road.[2] When William Hale became the area’s first Postmaster in 1854, they called the settlement Hale’s Corners.[3] The apostrophe in the name was used until at least 1898.[4]

Hales Corners became a crossroads community between Milwaukee and the lead mines in southwestern Wisconsin.[5] Starting in 1848, the Janesville Plank Road, a toll road, ran through Hales Corners.[6] Hotels serving travelers opened near the intersection of Janesville Plank Road, and Harris or Muskego Road, forming the commercial center of Hales Corners[7] (now the intersection of Janesville Road and Forest Home Avenue). Farms surrounded the business center of Hales Corners. These farms initially grew wheat, but dairying became common around the Civil War.[8] Starting in 1871, a monthly stock fair attracted visitors to Hales Corners. Popular products included livestock, food, and crafts.[9] Because of residents’ complaints about traffic and vagrants, the fair moved to St. Martins (in Franklin) in 1958.[10]

In 1903, The Milwaukee Electric Railway and Light Company connected the somewhat rural Hales Corners to Milwaukee with the first public transit line to the village.[11] In 1927, Hales Corners became an unincorporated village but remained legally part of Greenfield.[12] In the early 1950s, residents of many suburban communities became concerned that the City of Milwaukee would try to annex them.[13] In order to protect its independence, tax rates, and local service levels, Hales Corners incorporated as an independent village in 1952.[14] Four successive annexations made Hales Corners the 3.2 square miles that it remains in the twenty-first century.[15] The population at the time of incorporation was 1,382 people.[16] Hales Corners’ population has grown to 7,692 people in 2010, with almost 60 percent living in owner-occupied homes.[17]

One of the main attractions in Hales Corners is Charles B. Whitnall Park, which is part of the Milwaukee County Parks system. The park is just under one square mile and is partially located in Franklin.[18] The county began purchasing farm land on this site in 1928 and constructed the initial park with money from the federal New Deal programs.[19] Today, Whitnall Park contains a golf course, the Boerner Botanical Gardens, and the Wehr Nature Center, along with picnic areas, trails, a sledding hill and playground.[20]