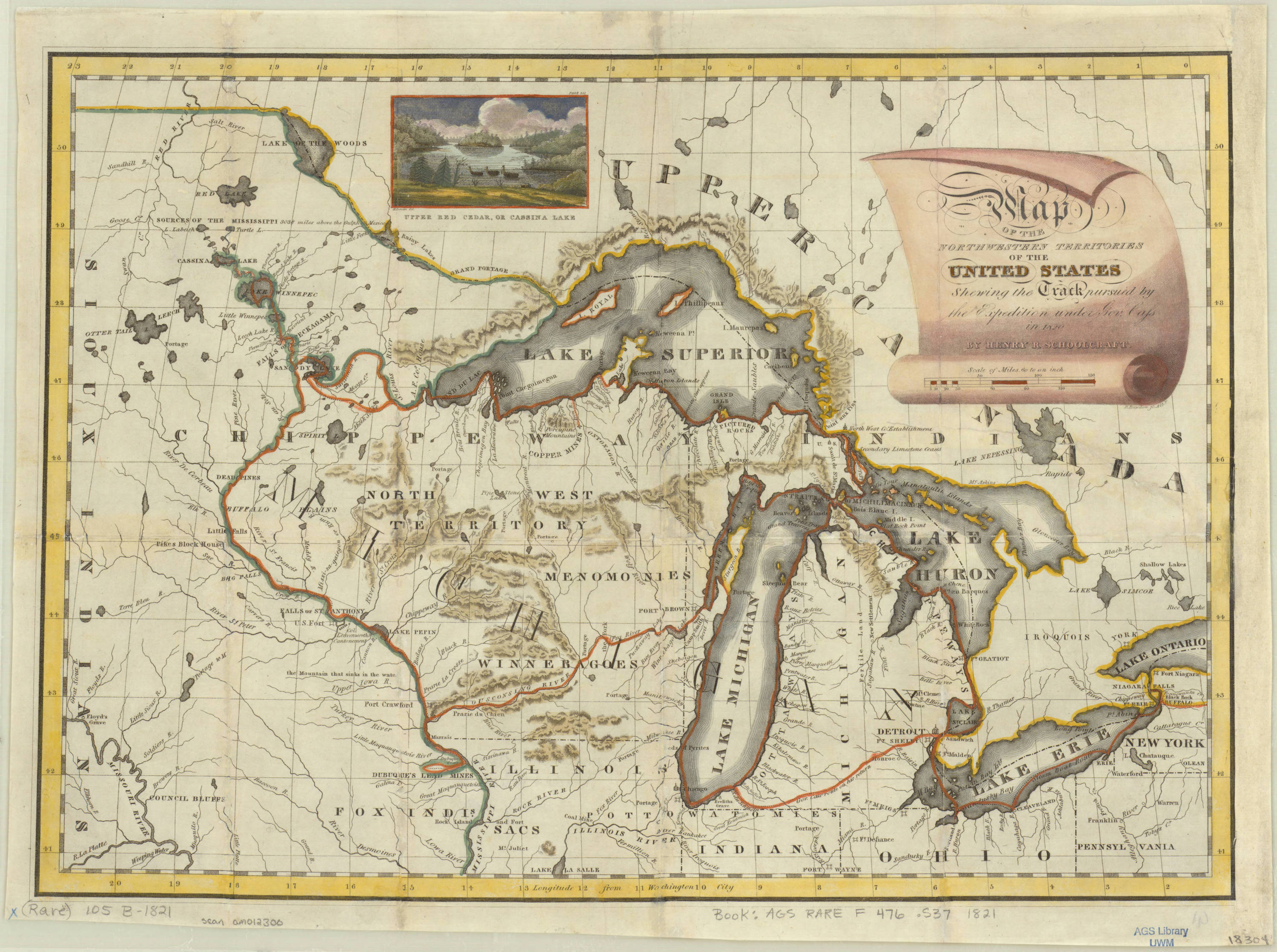 The Treaty of Paris (1783), which ended the American Revolution, recognized the legal jurisdiction of the United States over lands north of the Ohio River. For the next sixty-five years, the area that became Milwaukee fell under the jurisdiction of various federal territories. Although the authority of the federal government over what would become Wisconsin was more de jure than de facto prior to the 1830s, the political , social, and economic structures established during that time shaped Milwaukee’s future.

The Land Ordinance of 1785 and the Northwest Ordinance of 1787 helped create the environment in which Milwaukee would develop. The post-Revolutionary U.S. needed to raise revenue and determine how areas north of the Ohio River and west of Pennsylvania as far as the Mississippi River would be settled. The Land Ordinance of 1785 provided funds for the federal government through the sale of Northwestern lands while expanding American settlement in an orderly fashion. The land was surveyed in six-mile square townships divided into 36 equal sections, creating the familiar landscape of the American Midwest. The proceeds from the sale of one section in every township were directed toward an education fund, laying the groundwork for a system of public education.

The Northwest Ordinance of 1787 established the political framework for the Northwest. Rather than treating these lands as permanent colonies of the central government, the ordinance designed a three-stage process by which newly settled areas could be admitted as states on an equal status with the original thirteen. The Ordinance also prohibited slavery and, anticipating future constitutional development, guaranteed trial by jury, proportional representation, and religious freedom.[1]

Although a legal structure was in place, de facto jurisdiction over what would become Wisconsin remained contested for the next half century. British troops occupied forts until 1815, French traders exercised commercial authority in their communities, and Native American tribes effectively controlled vast expanses of these lands until a series of treaties had been concluded by 1833. Wisconsin fell theoretically under the jurisdiction of the Northwest Territory until 1800, Indiana Territory from 1800 to 1809, and Illinois Territory from 1809 until 1818. With the seat of government and courts located unfathomable distances away, American civil government within the boundaries of modern Wisconsin was nonexistent.[2]

Only with the transference of responsibility for Wisconsin to the Territory of Michigan in 1818 did the slow growth of civil government locally begin. New counties west of Lake Michigan were established that same year, with what became Milwaukee falling at first under the jurisdiction of Brown County. As Wisconsin’s population grew, the demand for more units of local government increased, and in 1834 the Michigan legislature established Milwaukee County, although it remained unorganized until 1835. This new county had jurisdiction over most of southeastern Wisconsin, stretching as far west as Madison and south to the Illinois border, containing all or part of thirteen modern counties.[3]

With Michigan on the cusp of statehood, the Wisconsin Territory, with its presidentially appointed governor and popularly elected legislature, was established on July 4, 1836. The territorial legislature promptly created additional counties, reducing Milwaukee County to what is now Milwaukee and Waukesha counties.[4] Between 1836 and 1848, the fledgling territorial legislature experimented with laws establishing, as well as regularly changing, the authority of local governments. For instance, in 1841, the legislature allowed counties to vote on whether they preferred a township form of government or county-style government. Milwaukee, settled largely by those from New York and New England, voted for township government.[5]

The Michigan legislature had created the unincorporated Town of Milwaukee in March 1835. Subsequently, the Wisconsin legislature created six more unincorporated towns in what is now Milwaukee County: Lake (1838); Kinnickinnic (renamed Greenfield in 1841) and Franklin (1839); and Granville, Oak Creek, and Wauwatosa (1840). These towns had responsibility for land assessment, schools, and poor relief. The last remnant of town government in Milwaukee County did not end until 1957.[6]

Incorporation provided additional local control for more densely populated areas. Milwaukee leaders petitioned the Michigan (1835) and Wisconsin (1836) legislatures for corporate status. Failing in those efforts, they turned to a general incorporation act of 1836 which permitted the creation of incorporated towns (known today as villages) with populations of more than three hundred in an area of no more than two square miles. In 1837, the residents of Juneautown and Kilbourntown incorporated respectively as “Milwaukee” and “Milwaukee on the West Side of the River.” An elected president and board of trustees governed each village. In 1839, the legislature consolidated the two villages into a single entity, with each former village as a separate ward. The village boundaries were expanded in 1845 when Walker’s Point was added as a ward. The formerly separate villages (now wards) retained some of their autonomy, with each having authority over its own taxing, spending, and debt. The unified Village of Milwaukee had a broad array of regulatory authority, including the ability to remove nuisances, ban gambling, license shows, establish markets, and provide fire protection. The village could compel property owners to pay for half the cost of sidewalks and compel them to work on roads. Fire protection relied on a volunteer fire department, although the village paid for equipment, and fire fighters received exemptions from militia duty and jury service.[7] Although Milwaukeeans had multiple units of local government, in practice the system was designed to have the same individuals holding various posts. At times during the territorial period, ward aldermen were designated ex officio as town supervisors, school commissioners, and county board members.[8]

As Milwaukee’s population grew, it sought greater municipal authority. Calls for public waterworks, construction of public wharves and docks, and street improvements required powers beyond those of village government. On January 5, 1846, voters approved a charter and the legislature incorporated Milwaukee as a city effective January 31, 1846. At the same time, Milwaukee County’s size was reduced through the creation of Waukesha County. Despite expanded powers and some reduction of ward independence, the new charter continued to provide for ward autonomy on debt and taxes. Not until after statehood would Milwaukee, in 1852, receive a new charter that began to better rationalize jurisdictional issues and reduce ward autonomy.[9]

Larson, Laurence Marcellus. A Financial and Administrative History of Milwaukee (University of Wisconsin, Bulletin no. 242, Economics and Political Science Series, vol. 4, no. 2, Madison, 1908).