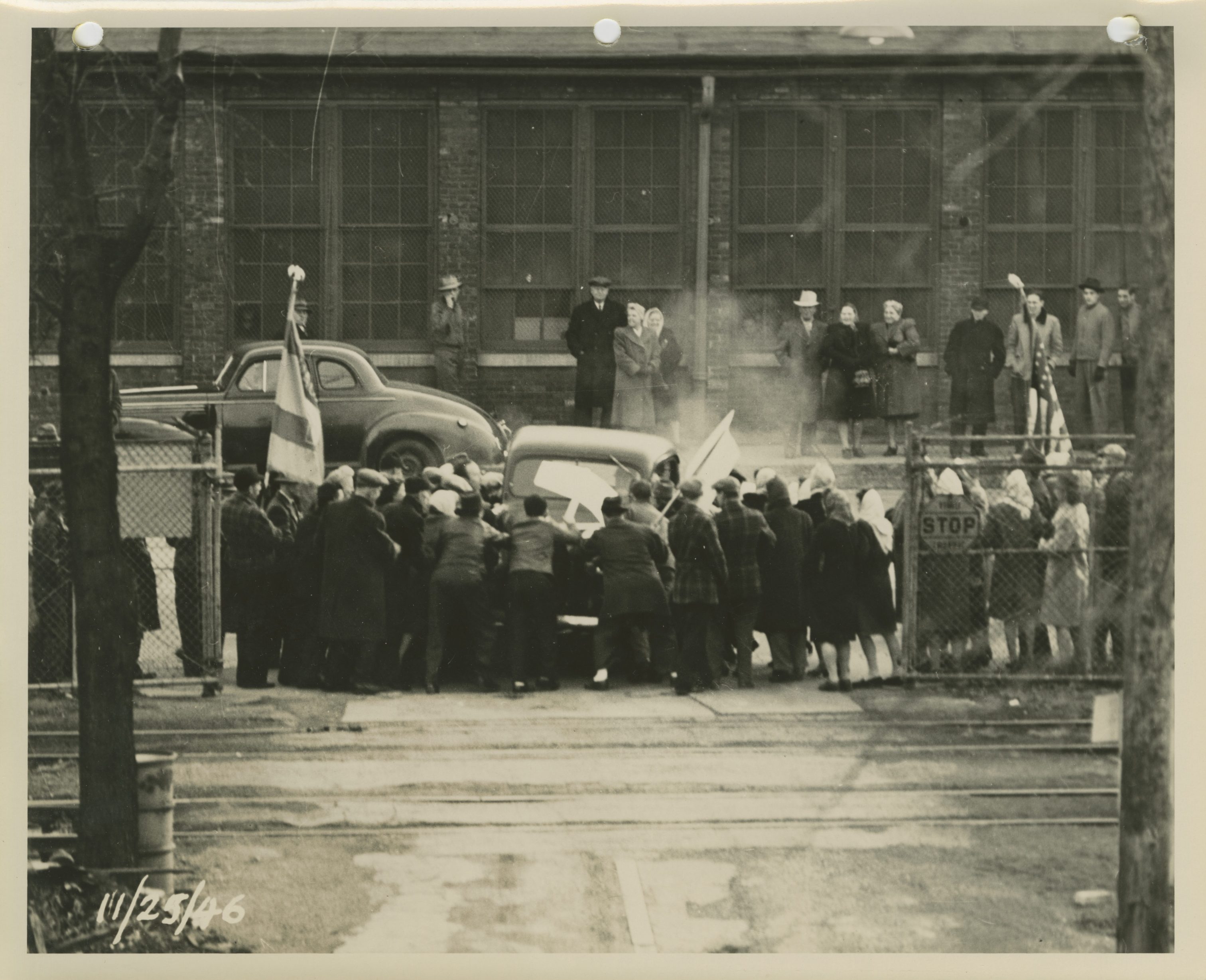 The U.S. Department of Labor defines a labor strike as “a temporary stoppage of work by a group of workers (not necessarily union members) to express a grievance or enforce a demand.”[1] The prevalence of strike action has waxed and waned over the course of Milwaukee and the nation’s history, as particular industries have grown and prospered, or faced economic crisis and decline.

While most labor strikes throughout Milwaukee history focused on wages, hours, and working conditions, in some eras issues of union recognition were more prominent. Even some lesser-known strikes reveal a great deal about the working life of ordinary Milwaukeeans.[2] For example, massive and sometimes violent strikes for an eight-hour day swept through the nation and Milwaukee in 1886, especially at Bay View’s North Chicago Rolling Mills. Yet a year earlier, makers of iron nails (called “nailers”) at the Rolling Mills accepted wage cuts after losing a long but little noticed-strike. This prompted their helpers (called “feeders”) to strike against the nailers, because it was nailers who hired their helpers—not the company—and nailers had passed along some of their wage loss to feeders.[3] In an 1884 strike, male printers at the Evening Wisconsin defied convention by including equal pay for women printers in their demands. In another unusual strike feature, when hundreds of cigar makers learned in 1881 that five major employers had imposed new work rules, they not only struck in protest but also opened their own Cooperative Cigar Manufacturing Company.[4]

Some strikes focused on new machinery. Coopers at the Pabst Brewing Company struck in 1899 over Pabst’s new barrel-making machines. American Federation of Labor president, Samuel Gompers, visited Milwaukee and convinced the coopers, who made barrels by hand, to end the strike, arguing that machines were inevitable and represented progress. Most leather workers were ambivalent about machinery because while machines lightened work they also made tanners work faster at lower wages. In 1892, one thousand tanners struck against five major tanneries over low wages and other issues, and in 1903 some three thousand struck against eight large tanneries whose owners belonged to an anti-union trade association.[5]

Many employers in those years were antiunion. In 1896, the local streetcar company hired hundreds of strikebreakers during a walkout and smashed the strike and the union. The company was not unionized again until after a 1934 strike, which ended tragically when a striker was electrocuted inside the company’s Lakeside power plant.[6] In 1910, Mary Harris “Mother” Jones helped to organize mostly Polish, women bottle washers in city breweries and led a successful strike against the obstinate owners for union recognition and better wages. Machinists faced much stiffer resistance from a local branch of the National Metal Trades Association, which waged an open-shop campaign, got an injunction to stop an eight-week strike in 1901, and helped crush a closed shop strike in 1919.[7]

In the 1930s, strikes in mass production industries and the passage of the Wagner Act in 1935 expanded the proportion of the labor force that was unionized. Many of these strikes aimed at union recognition,[8] but one strike in 1934 stemmed from racism. White workers who struck the Wehr Steel Company demanded the company recognize their union and fire all black employees. Police sided with strikers when they attacked black strikebreakers, but the company did not fire them and eventually reopened as an open shop.[9]

The longest strike in the 1930’s resulted in an unusual ordinance. Worried about the large and sometimes disorderly crowds outside the Lindemann-Hoverson stove works during a long strike, the Socialist-controlled Common Council passed an ordinance in 1935 authorizing the mayor or police chief to close a plant if the owner’s refusal to bargain with employees attracted crowds of over two hundred for two consecutive days. Socialists lost control of the council a year later and the ordinance was repealed.[13]

Strikes spread throughout the nation and Milwaukee during and immediately after World War II.[14] The most significant postwar strike was at Allis-Chalmers (A-C) and involved struggles between communists and non-communists for control of United Auto Workers Local 248. A-C workers had unsuccessfully struck for a closed shop in 1939, and struck again for seventy-six days in the “Defense Strike” of 1941. During the violent 1946-1947 A-C strike, which focused on union security, new grievance procedures, and wages, anti-communists regained control of Local 248 and eventually won a new union representation election.[15]

While most postwar walkouts aimed at improving existing contracts,[16] many public employees just sought union recognition and basic wage and benefit packages.[17] In the several decades after the war, some private sector unions tried to negotiate industry-wide contracts. An early example of this in Milwaukee occurred in the seventy-six day strike against six breweries in 1953 which sought to equalize local wages with brewery workers elsewhere. Non-factory workers also sustained long strikes. Milwaukee Journal mailers and printers struck for twenty-seven days in 1961, and a strike of several hundred writers and others at the Milwaukee Sentinel in 1962 over wages, pensions, hospitalization benefits, and split shifts shut down the paper for two months.[18]

Strike action has significantly declined nationally and locally since the 1980s, as the labor movement has lost membership and fought defensive battles to maintain working-class living standards. The strike that best symbolizes the plight of Milwaukee workers since the 1970s was the walkout at the Patrick Cudahy meatpacking plant from January 1987 to April 1989. Workers there had taken steep pay cuts under previous owners in 1982 and 1984, but new owners demanded more wage and benefit concessions. United Food and Commercial Workers Union Local P-40 ended the strike after it failed to buy the company during the company’s bankruptcy proceedings.[19]

Like their nineteenth-century predecessors, recent immigrants have tried to form unions to enhance their chances for better lives in America. In June 2012, workers at frozen pizza manufacturer, Palermo Villa, many of them undocumented immigrants, struck for union recognition. In November, the National Labor Relations Board (NLRB) ruled that the company had acted lawfully when it fired seventy-five employees whom it suspected of being undocumented (the union claimed Palermo did so to discourage unionization), but that the company did unlawfully fire nine other workers for supporting the strike. In June 2013, Palermo agreed to settle other outstanding issues with the NLRB.[20]

Gavett, Thomas. Development of the Labor Movement in Milwaukee. Madison and Milwaukee: University of Wisconsin Press, 1965.