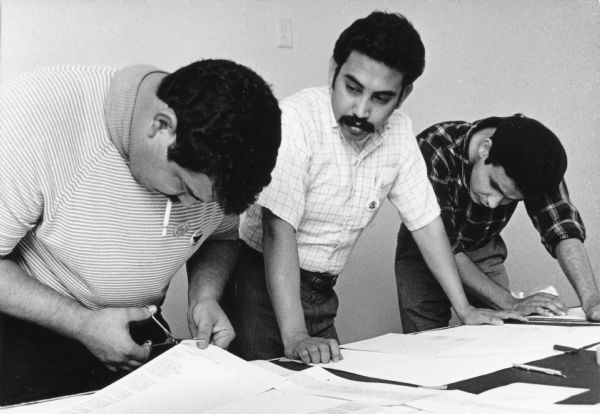 As Latinos (mostly Mexicans) began to settle in Milwaukee in the 1920s, they developed newspapers to disseminate news and information about their community in their native Spanish language. The earliest known newspapers were the Boletín Informativo and Sancho Panza, which was named after the fictional character in Cervantes’ novel Don Quijote.[1]

In 1930, several Latino immigrants founded the Sociedad Mutualista Hispano Azteca, a mutual aid association which served Latinos. The Sociedad also published a Spanish-language newspaper, El Mutualista, which was published from 1930 to 1970 and included news and information as well as poetry. In the 1970s, La Guardia was published weekly in Spanish and English by the Latin American Union for Civil Rights in Milwaukee. The paper was a strong voice for the Latino community in the Milwaukee advocating for Latino rights.[2]

Following the example of other ethnic groups in Milwaukee and other Latino communities throughout California and the American Southwest, Latinos in Milwaukee initiated radio programs on mainstream radio stations. The formats were similar, playing popular music and broadcasting news and community calendars. Dante Navarro, who came to Milwaukee from Mexico in 1945, in 1949 started what is believed to be the first radio program in Spanish, playing Tejano and Mexican music. The show, titled La Hora Hispana, was broadcast on WFOX AM and had a successful run of thirty-three years. Navarro became a key Latino activist in Milwaukee, mentoring many of the community’s younger leaders who were active in the Latino civil rights movement in Milwaukee.[3] Other radio programs such as Carlos Gamiño’s Asi es Mi Tierra came on the air in the 1970s.[4]

Although there are many Spanish-language options available to Latinos on cable and satellite TV as well as on the web, the Milwaukee media market also has numerous options for Latinos on traditional over-the-air broadcasting. The Milwaukee market added a Univision Network station in the 1990s, but it primarily broadcast the national network schedule, offering little or no local programming. Weigel Broadcasting, the owner of Channel 46, where Univision was broadcast, dropped Univision in 1999 in order to associate with the Telemundo Network, and eventually moved Telemundo to Channel 63, where it resides today.[5] Channel 63-1 broadcasts the Noticiero Wisconsin newscast Monday through Friday at 10 p.m.[6] The only other Spanish language television station available over the air in Milwaukee at this writing is Channel 38-1, which broadcasts Azteca TV, a Mexican media company.[7] The station is owned by DTV America, a Florida corporation, and primarily broadcasts the network’s schedule of novelas, talk, sports and entertainment but has also produced a local weekly magazine show.

Spanish-language radio continues to exist in Milwaukee, with four stations offering a combination of Mexican regional music and salsa, bachata, and reggaeton. Bustos Media, LLC from California owns two FM stations—La Gran D (104.7 FM) and LA 93.7, which both program Mexican and Tejano music. The other two stations are the only locally owned Spanish-language radio stations in the market—Radio Caliente 97.9 FM and Radio Caliente 1460 AM—owned by Milwaukee-born John Torres. The stations air local personalities from 11 a.m. to 9 p.m. daily.[8]