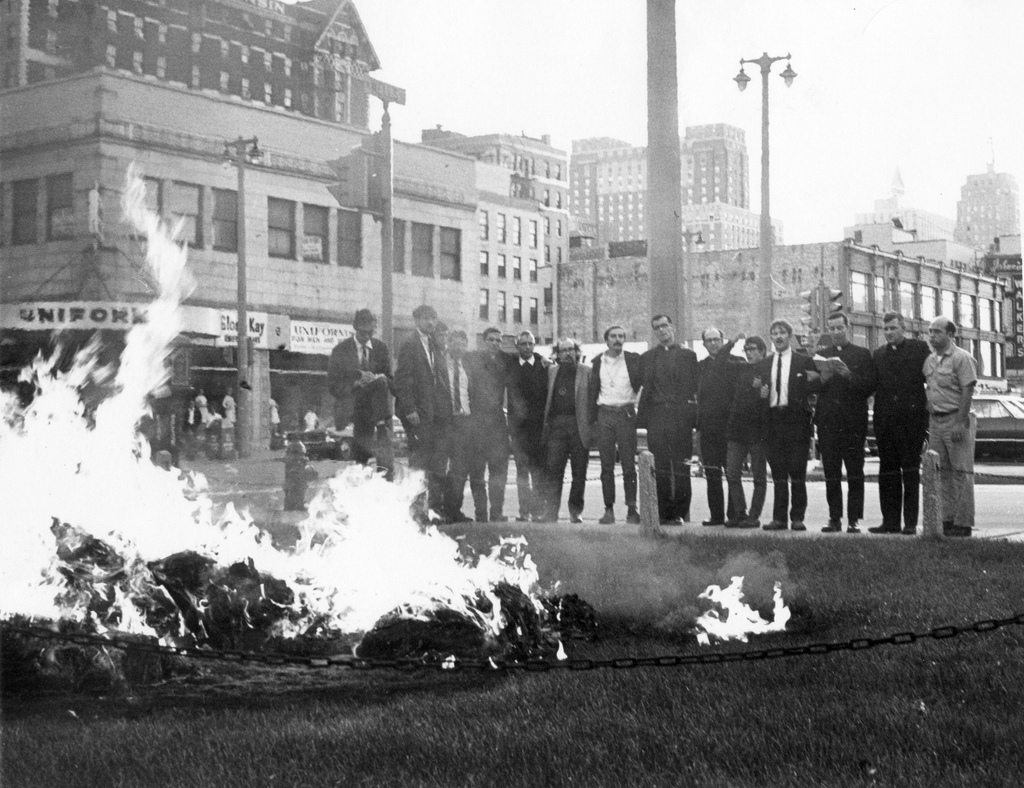 There were not many selective service protests in Milwaukee during the Vietnam War. However, one of the protests that did take place here became famous throughout the country. On September 24, 1968, fourteen men stole tens of thousands of draft cards from the Brumder Building (now the Germania Building) on West Wells Street. They took the draft cards to a park and then used homemade napalm to incinerate them near a veterans’ memorial.[1] As the cards burned, the protestors sang hymns and peacefully waited to be arrested by the Milwaukee Police Department.[2]

Before the cards were stolen, a graduate student named Nicholas Riddell caused a diversion. On September 22, 1968, Riddell led a takeover of the Cathedral of St. John the Evangelist while services were in progress. The takeover caused a police response that overwhelmed the resources of the Milwaukee Police Department. The church takeover allowed the members of the Milwaukee Fourteen to break into the Selective Service building on Wells Street unbeknownst to the police.[3]

Of the fourteen men involved in the protest, four were from Milwaukee, while the rest were from other parts of the United States. Five of the fourteen were Catholic priests, one was a Catholic brother, and one was from the Church of Scientology. Of the other seven, one was the chair of the Catholic Peace Fellowship.[4] The names of the Catholic priests and brother were Father James Harney from Massachusetts, Father Anthony Mullaney from New Hampshire, Father Alfred Janicke from Minnesota, Father Robert Cunnane from Massachusetts, and Brother Basil O’Leary of Minnesota. The minister from the Church of Scientology was John Higgenbotham.[5] The other participants included Don Cotton, James Forest, Jerry Gardner, Doug Marvy, Fred Ogile, Larry Rosenbaugh, Robert Graf, and Michael Cullen.[6]

Every member of the Milwaukee Fourteen was tried for burglary and arson to property. In May of 1969, eight months after the protest, twelve of the fourteen were found guilty, while the two remaining individuals requested separate trials.[7] A federal judge threw out a separate federal case against twelve of the fourteen men, explaining that media coverage surrounding the event would prevent an impartial jury.[8] But all members of the Milwaukee Fourteen did end up serving time in prison, with varying sentences. One of the members, Michael Cullen, was deported to his native Ireland in 1973 due to his involvement in the anti-war protest.[9]

Foran, Chris. “Our Back Pages: When the Milwaukee Fourteen Made a Fiery Statement.” Milwaukee Journal Sentinel, September 20, 2016.