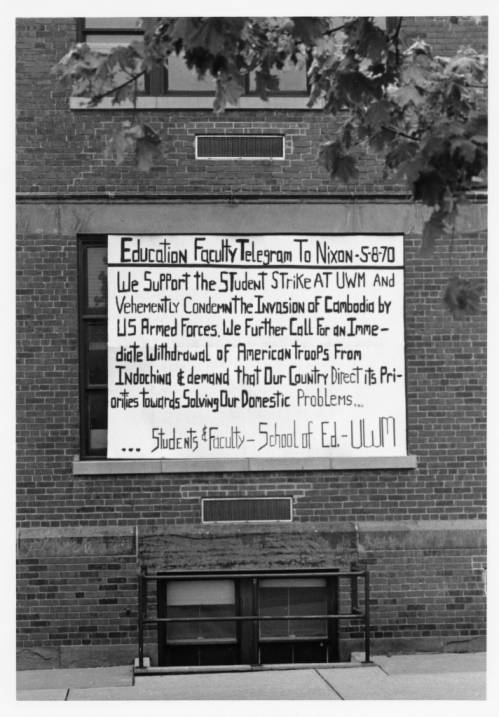 Peace education provides the opportunity to examine values and attitudes, acquire knowledge, and develop skills useful for understanding wars and violence and promoting a culture of peace and global understanding.[1]

People have engaged in education for peace since the early twentieth century.[5] “The Wisconsin Plan for Peace” was part of the movement to prevent American participation in foreign wars.[6] The Women’s International League for Peace and Freedom (WILPF),[7] the University of Wisconsin-Milwaukee Committee on Problems of War and Peace,[8] and the Institute for World Affairs[9] have all promoted education for international understanding. Milwaukee Public Theater has used drama to raise justice issues. Diverse religious communities and the Interfaith Conference of Greater Milwaukee have offered programs on war, peace, and nonviolence, often from an interfaith perspective.

The University of Wisconsin-Milwaukee established its academic Peace Studies Certificate Program and offered a course in peace education in 1983,[10] and Marquette University established its Center for Peacemaking in 2007. Other universities have also introduced peace education courses, many from multiple disciplinary perspectives. Faculty from public and private colleges and universities in Wisconsin collaborated during the 1980s nuclear threat to form the Wisconsin Institute for the Study of War, Peace, and Global Cooperation in 1985.[11] The International Rotary Club established its peace fellowship program for graduate studies in 2002.[12]

Peace education for children dates to the late nineteenth century and continues in some form today. Socialists began offering education programs to high school students on democracy and the dangers of capitalism and its relationship to war during the Great War.[13] The Women’s International League for Peace and Freedom developed Learning Peace materials for use in schools between 1972 and 1976.[14] A Peace Education Committee offered an anti-war curriculum to high school students and their teachers throughout a five-county area from 1971 to 1973.[15]

Peace Education in the Milwaukee Public Schools (MPS) deserves special mention. Peacemaking Associates opened in 1974[16] and began offering peacemaking for children programs to teachers and students in Milwaukee Public Schools (MPS), as well as other schools throughout Southeastern Wisconsin.[17] This program was based on the theory that peace education should teach both about and for peace, and include both theoretical and affective learning experiences.[18] At the time, members of the “Coalition for Peaceful Schools” worked for the peaceful and humane desegregation of Milwaukee Public Schools,[19] and in 1976, as a result of the federal desegregation settlement, the MPS Board of School Directors was charged with offering programs supporting this effort for principals, teachers, and students in public and private schools throughout a five-county area of Southeastern Wisconsin. Peacemaking Associates and the Milwaukee Public Schools’ Department of Human Resources collaborated to expand the popular Peacemaking for Children programs as a part of this settlement.[20] Related programs have included Safe & Sound, a community-based, collaborative crime prevention strategy, and anti-bullying, conflict resolution, anti-violence, and peer mediation.[21] In the fall of 1982, members of the local chapter of Educators for Social Responsibility urged the Curriculum Committee of the MPS Board of Directors to implement a curriculum to address the growing nuclear fear among students and their teachers. Committee members chose instead to develop an education for peace program that offered a more holistic perspective. Three years later, MPS became one of the first public school systems in the United States to establish a comprehensive K-12 peace education curriculum. Teachers began using this curriculum with the February 1985 school term. The Peacemaking for Children curriculum first offered in MPS schools in 1974 became the foundation for the MPS K-5 Peace Education Program in 1985.[22] The MPS Peace Education Curriculum was updated in 1995 to address a growing concern about school and community violence.[23]

Both approval and controversy accompany efforts for peace education. Word of mouth helped spread the message of popular peace education programs; still, some suggested that to teach “peace” was unpatriotic, especially during the height of any given war, as well as during the development of the peace education curriculum for students in the Milwaukee Public Schools.[24] Even so, evaluations of the pioneering Peacemaking for Children and Peacemaking for Families programs offered through Peacemaking Associates and of the UWM Peace Studies Certificate Program continue to testify to the effectiveness of these programs to teach both about and for peace.[25]

Haessly, Jacqueline. What Shall We Teach Our Children: Peace Education in the Milwaukee Public Schools. Milwaukee: Peace Talk Publications, 1985. 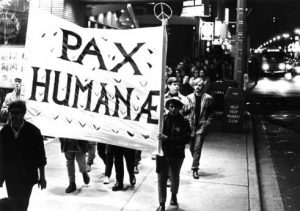