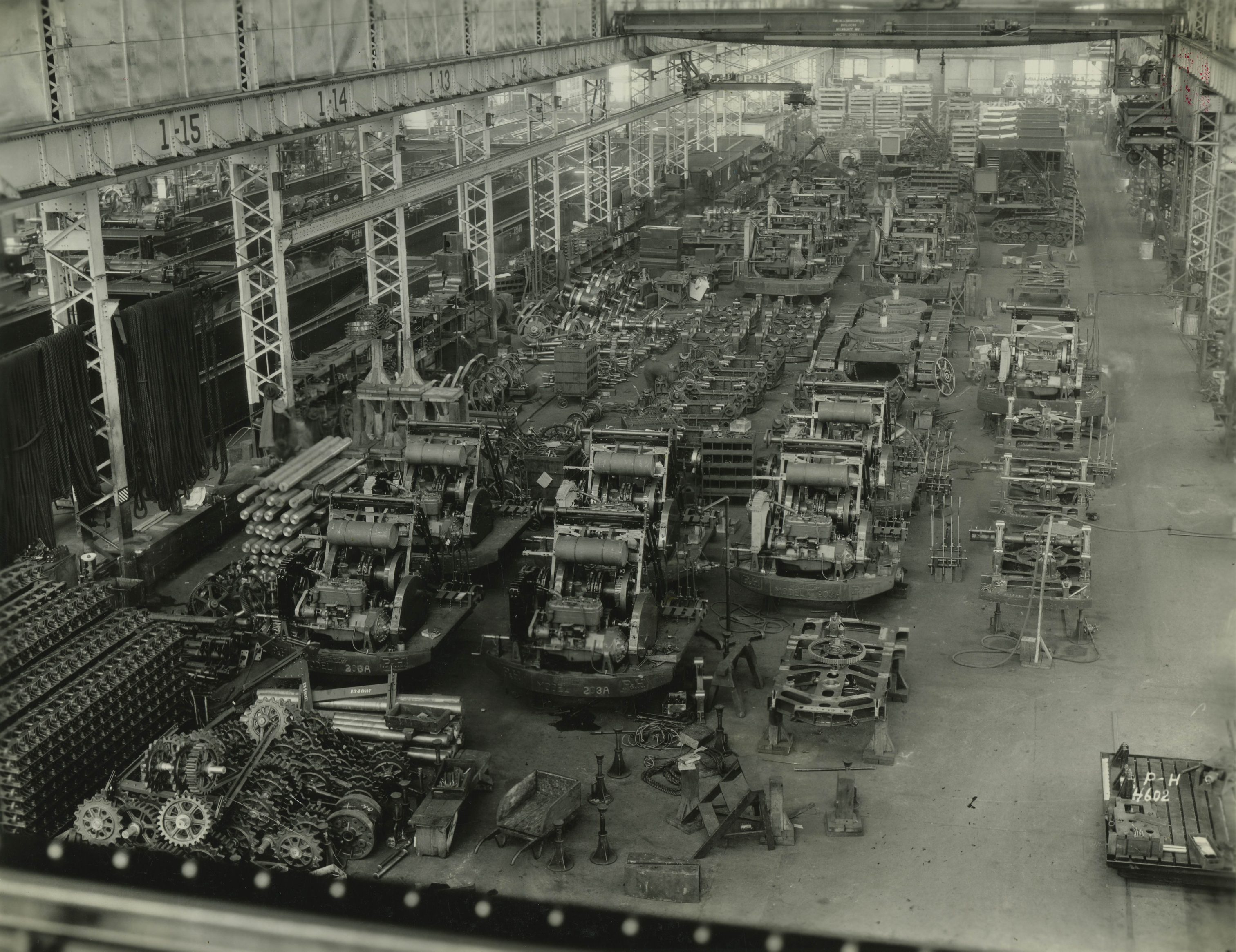 Pawling and Harnischfeger (P&H) was a Milwaukee-based company that specialized in electronic motors, crane design and production, and later the manufacturing of mining equipment. Setting up in Walker’s Point, Alonzo Pawling and Henry Harnischfeger started a small machine shop that repaired and fabricated machinery for local businesses.[1] The company also produced knitting and sewing machines for the city’s booming textile industries.[2] While considered a tragedy, the collapse of a rope-driven crane in the E. P. Allis plant in 1887 gave the two entrepreneurs an opportunity to promote their latest product, the electric crane.[3] Designed by engineer A. J. Shaw, the crane became the first of many Pawling and Harnischfeger products manufactured for the construction and material-handling fields.[4] As American cities expanded near the turn of the twentieth century, government officials, city planners, and construction companies required powerful and efficient machinery for digging and excavation. Pawling and Harnischfeger’s boom-and wheel-type excavators, the gas engine powered dragline, and the planetary sprocket-and-chain crowd mechanism all put the company on the map for industrial innovation and technological advancement.[5]

Alonzo Pawling’s failing health forced the founder to dissolve his partnership with Harnischfeger in 1911; he sold his interests in the company to his partner, who rebranded the company as the Harnischfeger Corporation.[6] Henry Harnischfeger oversaw the expansion and growth of the company until 1930 when his son, Walter, took the reins. Walter Harnischfeger guided the company through World War II as crane, hoist, and digging machine productions were ramped up to aid the war effort.[7] He labored to build the P&H brand and expand the company’s holdings, purchasing the Milwaukee Electric Crane & Manufacturing Corporation in 1963.[8] By 1970 the company was known as one of the best crane, shovel, and excavator producers in the world.[9] After the death of Henry Harnischfeger, the founder’s grandson, the material-handling division of the company was sold and consolidated under Morris Material Handling.[10] Harnischfeger Corporation declared bankruptcy in 1999 and went through restructuring to save the company’s profitable position in the surface mining business. Under the leadership of John Nils Hanson, P&H integrated with Joy Mining Machinery in 2000.[11] Renamed Joy Global shortly thereafter, by the opening of 2016 this mining equipment conglomerate employed nearly nine hundred people and maintained a production plant, the surface mining equipment headquarters, a distribution center, and its corporate headquarters in Milwaukee.[12] However, a few months into that year Joy Global announced its plans to close its welding and heavy manufacturing divisions, eliminating 130 union jobs.[13] In July 2016, Komatsu acquired Joy Global in a $3.7 billion transaction, planning to phase out the latter’s corporate name but to retain the P&H and Joy Global product brands.[14]