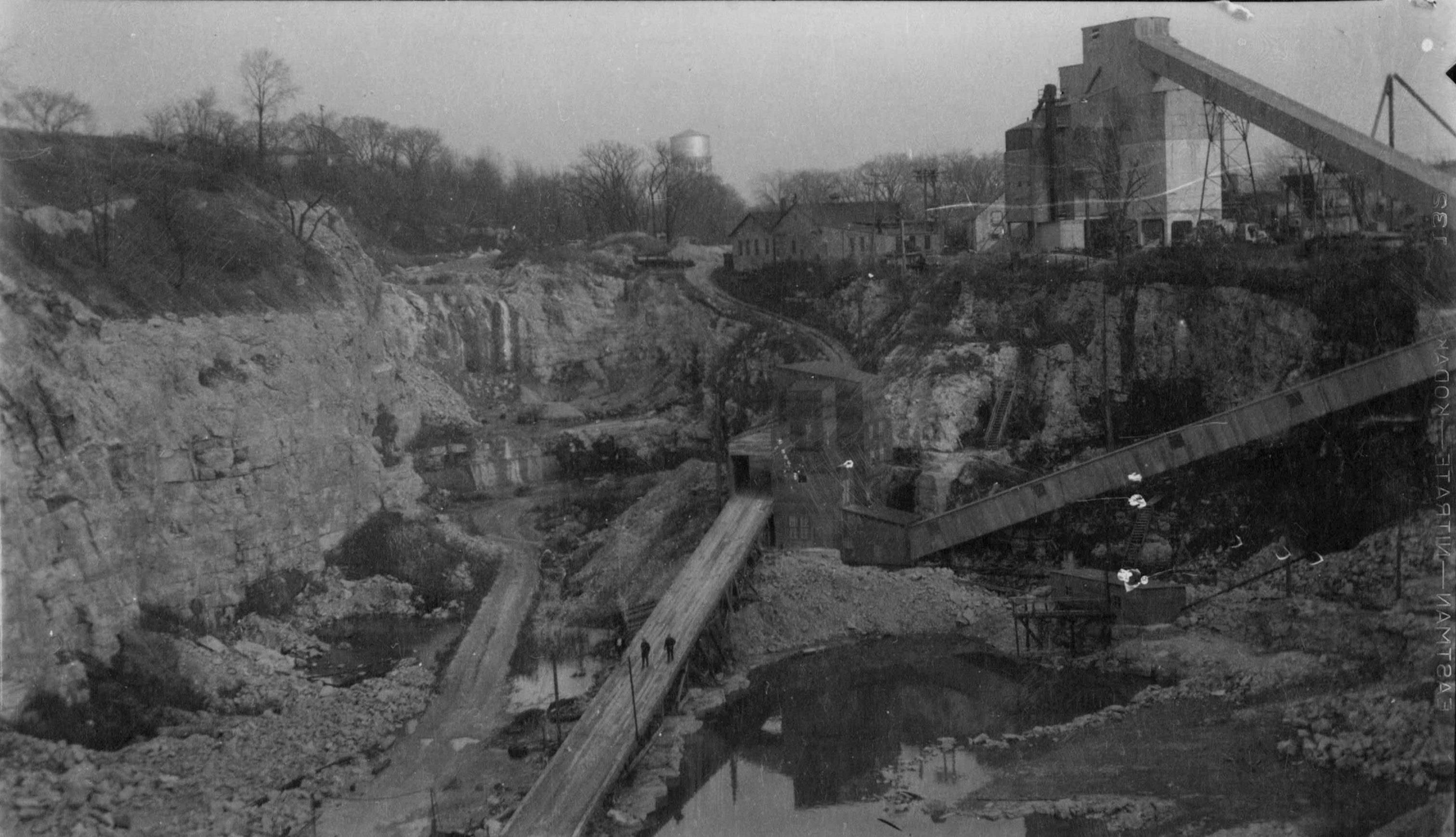 The mineral resources of southeast Wisconsin are derived primarily from the Silurian and Devonian bedrock, which dates back to more than 350 million years ago, and various glacial deposits, which were emplaced about 13,000 to 15,000 years ago as glaciers retreated from the Midwest.

Silurian Dolostone is the dominant quarried rock, coming from the near surface exposures of the rock associated with the Niagara Escarpment that is found in eastern Wisconsin from Door County to beyond the Illinois border. Locally this rock is known as Wauwatosa Limestone or Lannon Stone. The names are derived from prominent quarrying locations. Quarries, both active and abandoned, can be found throughout southeastern Wisconsin. It characteristically is a buff colored, blocky, sedimentary building stone that has been quarried here since the mid-1800s.[1] Increase Lapham originally came to Milwaukee as a surveyor for Byron Kilbourn but eventually built a career on the geology of the state and made the connection between the local dolomite bedrock and same rock at Niagara Falls.[2] This Niagara Dolostone remains a primary building and landscape material throughout southeastern Wisconsin. It is also crushed for use in asphalt and road ballast. In 2008, the state produced 852,000 tons of crushed and dimensional dolostone valued at 71.5 million dollars.[3]

For a short time, the sedimentary Devonian-age Milwaukee Formation was quarried along stretches of the Milwaukee River near Shorewood for cement rock. This rock had the appropriate characteristics when ground and burned in kilns to make cement. These operations lasted from about 1876 to 1911.[4] Remains of these operations can be found in old quarries along the Milwaukee River between East Capitol Drive and Hampton Avenue. A UWM parking lot on the west side of the river was one of these quarries.

The only significant underground mining locally took place near Mayville, Wisconsin at the Neda Iron Mine. This is an oolitic sedimentary iron deposit of Ordovician age that was mined from about 1845 to 1928.[5] The ore was processed locally as well as at smelters in Milwaukee and Chicago. Eventually higher quality ore from the Lake Superior region put the Neda mine out of business.

Glacial materials of clay, sand, and gravel have provided the area with other building materials. Retreating glaciers deposited these materials about 15,000 years ago. The clay deposits (glacial-lacustrine in origin) were mostly found along the banks of the Menomonee River to the west of downtown and along the Kinnickinnic River to the south. The clay was dug by hand or plowed up, and mixed to a uniform texture before placing in molds. These clays were rich in calcium and magnesium, so much so that when fired the red clays turned into the creamy color that is associated with “Cream City Brick,” thus giving Milwaukee a new moniker.[6] There were many brickyards throughout Southeastern Wisconsin, primarily from 1850-1900. Those away from the dolostone bedrock usually produced red bricks. There are no active brickyards in the region today.

Sand and gravel deposits are associated with the edges of the Green Bay and Lake Michigan glacial lobes that met along the line from Sheboygan County down through Waukesha County and now known as the North and South Kettle Moraine region. These deposits, classified as kames and eskers, are formed as rivers of water flow through the melting ice. These deposits, which can be over 100 feet thick, are open pit quarry operations that are visible along highways from Plymouth to the north to Elkhorn in the south. As of 2008, the state produced about 39 million tons of sand and gravel, valued at 305 million dollars.[7]

Buckley, Ernest. “On the Building and Ornamental Stones of Wisconsin.” Wisconsin Geological and Natural History Bulletin, #4, 1896.