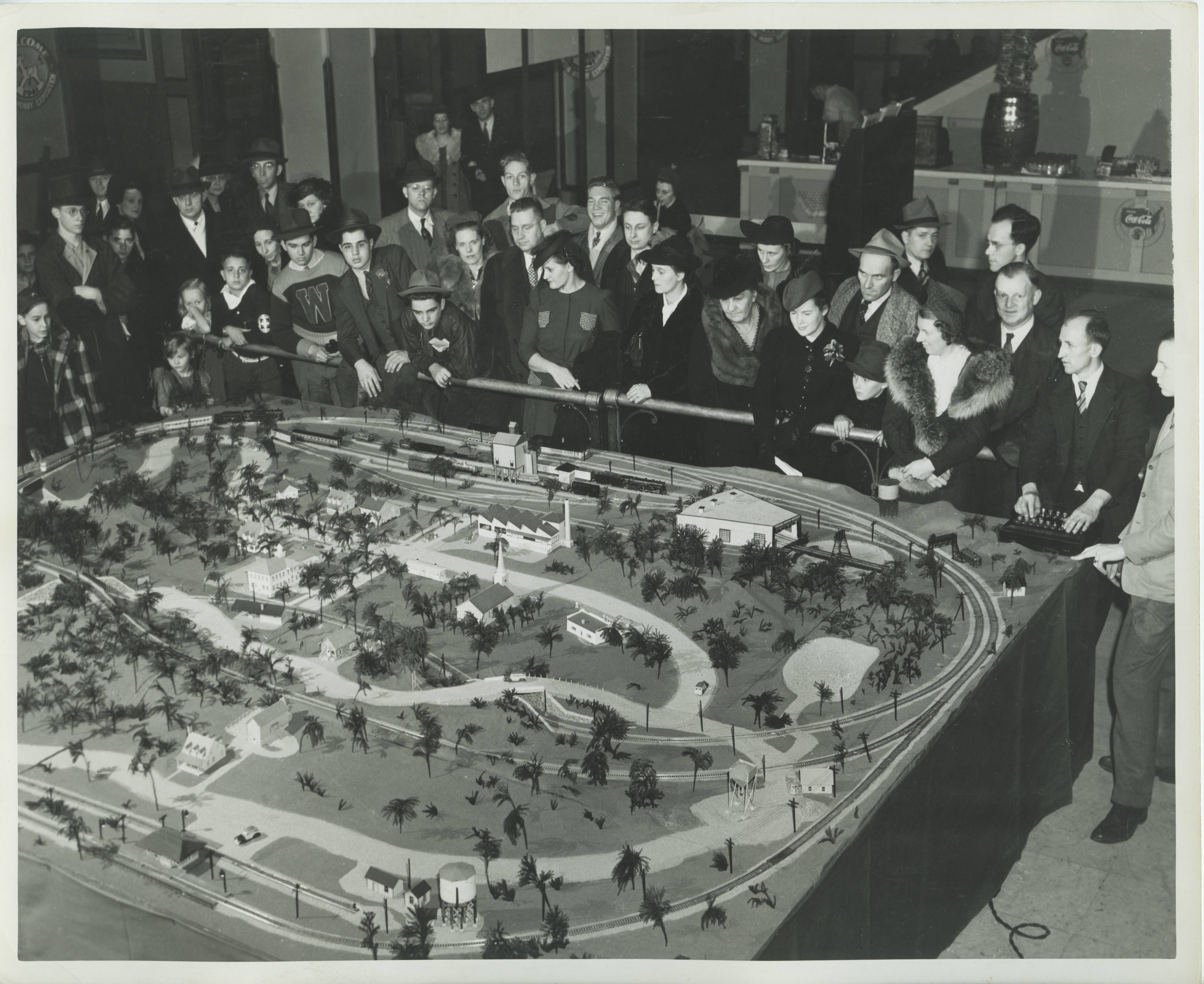 Whether fabricating color-matched dirt for a layout or studying U.S. topographical reports to achieve a precise scale, model railroaders strive for accuracy and authenticity. While there are a number of cities that boast clubs and manufacturers, Milwaukee is arguably the historical headquarters of model railroading.[1]

One of the nation’s oldest model railroading organizations, the Model Railroad Club of Milwaukee, has, appropriately enough, made a defunct railroad station in Walker’s Point, just south of downtown, its clubhouse since the mid-1930s.[2] A small team of engineers operates the trains that run over its two thousand feet of track, one of the nation’s largest designs when it was created in the late 1970s.[3] This design was the work of an organization whose members had helped shape the course of model railroading in the early 1930s.[4]

The popularity of model railroading surged during the economic boom that followed the Second World War.[9] Model Railroader had 100,000 readers by 1950, while throughout the postwar decades, the model train market witnessed the introduction and revitalization of various scales, from 1/160th N-scale to the large G-gauge for outdoor garden railroads.[10] By the 1980s, Wm. K. Walthers Inc. had established itself as the nation’s largest wholesaler of model railroading kits and accessories.[11] The company had also compiled an extensive archive of historical railroad blueprints to foster the ever-important quest authenticity.[12] Meanwhile, the Kalmbach Publishing Co. had distributed a number of specialized model railroading magazines and books that reflected the hobby’s growth, although circulation has steadily declined since the advent of the internet in the early 1990s.[13]

While a model railroader spends countless hours in solitude perfecting his work (most are male), thousands of them, from all over the country, make an annual pilgrimage to Milwaukee’s two-day Trainfest, which began as a one-day event in 1972 and is the largest such gathering in the country.[14] Over 20,000 visitors and vendors visit State Fair Park in West Allis, where they learn and share techniques and, of course, run fifty or so model railroads.[15] Similarly, the garden train show at the Mitchell Park Conservatory (the Domes), where larger, G-gauge trains run their loops to a different theme each year, has attracted thousands of visitors since 1996.[16]

Of the half-dozen or so clubs in the area, most focus on a certain size of model train and organize get-togethers and small shows throughout the year.[17] A number of groups, such as the Lionel Railroad Club, Milwaukee’s second oldest, open their clubhouses to the public and hold swap meets while modelers now share their work and ideas over the internet.[18]

In the early 2000s, the future of model railroading lacked clarity.[19] Actual railroads no longer enjoyed a place in the nation’s popular imagination and some hobbyists argued that young people lacked the patience required by model railroading.[20] By 2010, Wm. Walthers, Inc. and Kalmbach Publishing headed an effort to move model railroading into the twenty-first century, moving into internet media and video while promoting the pastime as “The World’s Greatest Hobby” at shows throughout the country.[21]