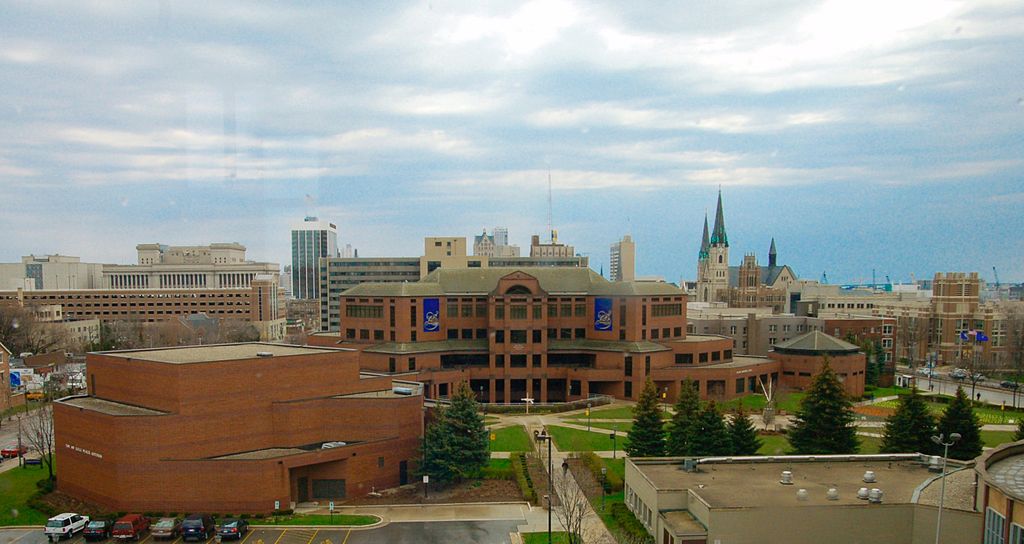 John Martin Henni, the first Catholic bishop of Milwaukee, came to his adopted city in 1843 with several ambitions. Among them, he wanted to open a college. The biggest difficulty with this part of his plan was the absence of an intellectual culture in Milwaukee conducive to such an enterprise. The village—Milwaukee was not even a city at this time—had no paved streets, no high school, and no library. And, realistically, it had few, if any, students prepared for collegiate life.[1]

After several false starts, he finally convinced the Society of Jesus, a religious order better known as the Jesuits, to embrace his vision of a Catholic college. To begin the process, the prelate assigned the city’s newest parish, St. Gall, to the Jesuits in 1855 so that they would have a place to live and an income with which to support their small community. Meanwhile, Bishop Henni forged ahead, purchasing a prominent hill overlooking Milwaukee’s developing downtown. In time, he surrendered ownership of this property to the Society of Jesus after the religious congregation incorporated Marquette College—a title chosen by the bishop himself—in 1864. At that moment, however, Henni’s college existed, literally, in name only.[2]

At long last in 1881 the Jesuits assembled the personnel and, they hoped, the student body to establish an authentic college. But, as it turned out, Milwaukee’s finest young scholars—only males could apply—still lacked the preparatory background to undertake collegiate studies in the Jesuit tradition. As a result, while high school-level instruction began that year, regular college classes did not begin until the fall of 1883. During its early years, Marquette College hosted more middle school and high school students than collegians in a new, three-story building at 10th and State streets. Not until 1907 when Johnston Hall (named after the donors) opened along Grand Avenue (later, Wisconsin Avenue) did the College have a facility solely dedicated to undergraduates.[3]

During its first twenty-five years, Marquette College was a liberal arts school in the Jesuit tradition, focusing upon course work for a Bachelor of Arts degree with a single major: Philosophy. Then in early 1907, because of pressure from the American Medical Association, the Milwaukee Medical College, a for-profit institution, approached Marquette to arrange an academic partnership which, in turn, required the College to reincorporate itself as a university. About a year later, Marquette purchased two privately owned law schools. An engineering program was established months later, followed in two years by courses of study in economics (later the College of Business) and journalism (later part of the College of Communications). Within three years, Marquette had gone from a small liberal arts school to a full-fledged university offering degrees (or diplomas) in medicine, dentistry, pharmacy, nursing, law, engineering, business, journalism, and music as well as philosophy.[4]

In June of 1909, the rector (today’s president) of Marquette University scheduled the first comprehensive summer school in American Catholic higher education. In addition to offering young Milwaukee men who worked an extra option for access to a college education, Father James McCabe wanted to provide religious sisters, who staffed parochial elementary and secondary schools throughout Wisconsin, with a route toward a college degree. And before instruction could commence, McCabe decided to permit laywomen to enroll as well. These choices earned him a reprimand from his religious superior in St. Louis, and an order to cease and desist. After an appeal to the Jesuit Superior General in Rome, McCabe received a surprising thumbs-up for his co-educational summer program, allowing Marquette University to become the first Catholic institution of higher education in the world to admit both men and women into its core academic program: the Bachelor of Arts.[5]

Nearly a decade later, the university purchased a sizable tract of land south of Grand Avenue and east of 16th Street. The two mansions on this property became, in time, home for the university’s School of Speech and for the athletic department. Shortly thereafter, the university invested in its first building campaign, an enterprise that underwrote structures for law, basic sciences, and dentistry as well as a long-dreamed of gymnasium. In the early 1930s, Marquette added a medical school complex.[6]

Marquette University, which barely survived the economic turbulence of the Great Depression, saw its enrollment skyrocket following World War Two. Thousands of former soldiers and seamen flooded the campus, taking advantage of the GI Bill. In response, a building for business students was erected in 1950, followed by two of the most important additions in the history of the university: a student union and the university’s first library building. These structural improvements were matched by a meticulous, campus-wide self-analysis designed to assess what direction Marquette should take in the last half of the twentieth century. Out of this effort came a thorough revision of existing majors, the creation of new departments in fields such as sociology and political science, the establishment of elevated standards for faculty recruitment (in particular, hiring faculty with terminal degrees in their respective fields), and, most notably, the return of graduate education, including doctoral programs.[7]

Since its inception, control of Marquette College/University had always rested in the hands of three Jesuits who constituted the corporation’s Board of Trustees. Although laymen served as deans in the professional schools and colleges, Jesuits always filled the University’s top administrative positions. But the composition of the highest levels of leadership at faith-based colleges and universities was changing by the 1960s, and in January of 1969, President John P. Raynor, S.J., announced a complete overhaul of membership on the Board of Trustees: from three Jesuits to eight Jesuits and twenty-one laymen. Ultimate control over the most precious commodity held in trust by the Society of Jesus in Wisconsin was now handed over to a select group of non-Jesuits who hereafter would have to take complete responsibility for fulfilling the mission of Marquette University. In the summer of 2014, a layman became the school’s twenty-fourth—and first non-Jesuit—president.[8]

Under the aegis of the 1949 Federal Housing Act (and subsequent legislation), a thirty-block zone between 11th and 16th streets and from Clybourn to Wells underwent a total overhaul in the decades after 1960 as a combination of academic, residential, and recreational facilities arose on land acquired, in part, through urban renewal programs. Over time, a unified, comprehensive college campus unfolded. By 2015, 11,000 undergraduate, graduate, and professional students attended Wisconsin’s largest Catholic university.[9]

Engbring, Norman H. An Anchor for the Future. Milwaukee: Medical College of Wisconsin, 1991. 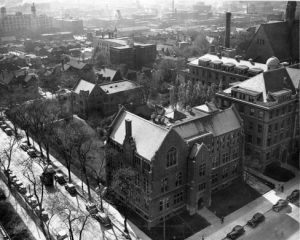 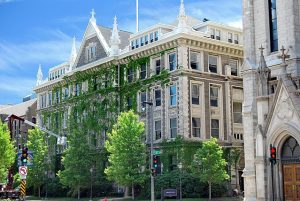