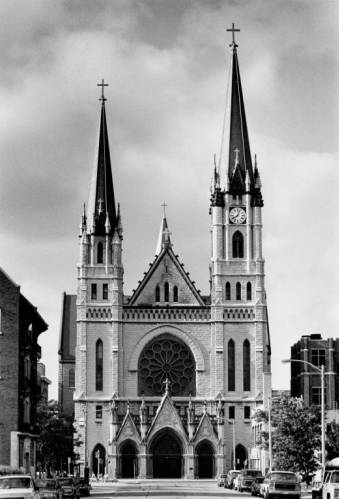 In 1894, along Milwaukee’s most elegant of boulevards (Grand Avenue, now Wisconsin Avenue), arose an imposing, twin-towered Gothic church whose façade was reminiscent of the cathedral at Chartres. The Church of the Gesu was designed by H.C. Koch who also served as architect for Milwaukee’s city hall, then still under construction. It named after the burial site of the founder of the Society of Jesus, St. Ignatius of Loyola. Gesu replaced two previous Jesuit parishes, St. Gall and Holy Name, and served as a touchstone for English-speaking Milwaukee Catholics, whether from the elites who resided within Grand Avenue’s lineup of mansions or from a working-class Irish community in the nearby Tory Hill neighborhood.[1] A parish school opened in 1899 and educated thousands of neighborhood children before closing in 1968. In addition to classrooms, the school included a bowling alley, an auditorium, and meeting rooms. Its facilities served local children as well as Marquette University students for decades. During the 1920s, Gesu’s pastor in cooperation with the Knights of Columbus sponsored spiritual programs on behalf of the city’s growing population of Spanish-speaking Catholics.[2] Today, a parish center continues the faith center’s services to its neediest neighbors through a food program.[3] After nearly one hundred and twenty-five years, the church still offers four Sunday Masses and remains one of the city’s most valued venues for spring and summer wedding ceremonies.[4]

Avella, Steven. In the Richness of the Earth. Milwaukee: Marquette University Press, 2002.