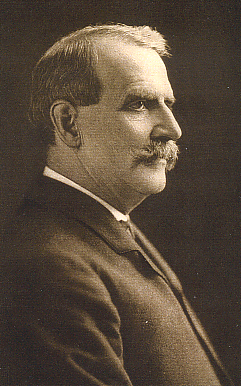 Henry Clay Payne (November 23, 1843-October 4, 1904) played an instrumental role in Milwaukee’s late 19th century commercial and political development. Born in Massachusetts and rejected from military service, he moved to Milwaukee in his teens, working as a shop clerk and insurance salesman before entering politics. He led the Milwaukee Young Republicans and became Milwaukee’s U.S. Postmaster, chaired the Wisconsin Republican Party, and became a railroad lobbyist; according to long-time adversary, Robert La Follette, Sr., Payne was “the most effective railroad lobbyist I ever knew.”

Payne was president of both the Wisconsin Telephone Company and the Milwaukee Northern Railroad but is best known as vice-president of The Milwaukee Electric Railway & Light Co. (TMER&L Co.). Starting in 1890 he assisted railroad tycoon Henry Villard in acquiring, consolidating, and electrifying all of Milwaukee’s horse-drawn streetcars for the North American Company of New Jersey.[1]

In 1896 Payne refused a promised one cent raise to workers; the ensuing strike and boycott were unsuccessful. This set the stage for continuing negative relations between TMER&L Co. and the city for many years to come.[2] In 1900 Payne oversaw rapid expansion of both streetcar and interurban service throughout the region and negotiated a 35-year municipal franchise/monopoly with the Milwaukee Common Council. Payne then served as U.S. Postmaster under President Teddy Roosevelt from 1902 until his death.[3]

McShane, Clay. Technology and Reform: Street Railways and the Growth of Milwaukee, 1887-1900. Madison, WI: The State Historical Society of Wisconsin, 1974.