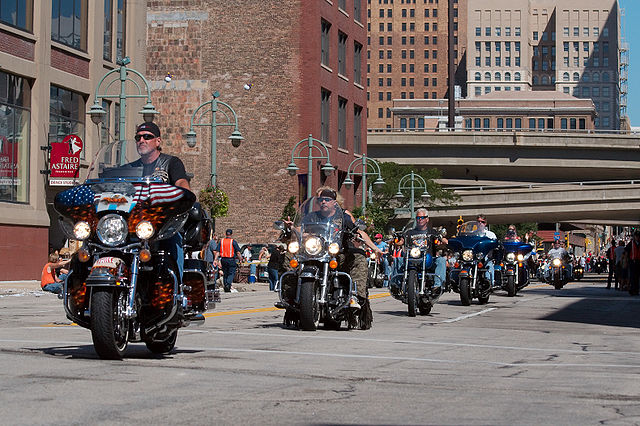 Harley-Davidson is an international motorcycle manufacturing company with production facilities, certified dealers, and a museum all within the city of Milwaukee. Located at 37th Street and Juneau Avenue, Harley-Davidson’s corporate headquarters is not too far from the site of the first Harley-Davidson shop.[1] In 1901, William Harley and Arthur Davidson, coworkers at a bicycle factory, embarked on a journey to create a motorized bicycle. In order to market their product, the company became more involved in national competitions, allowing Harley-Davidson to become a household name among motorcycle enthusiasts.[2] As demand increased for Harley motorcycles, the company moved to a new complex along Juneau Avenue, churning out more than 18,000 cycles a year.[3] Almost half of Harley-Davidson motorcycles produced in the 1910s were sold and used by the United States military, since their mobility, durability, and affordability made them ideal transportation for the war-torn terrain in continental Europe.[4]

Motorcycle sales slowed after the war as Americans sought the more affordable automobile for personal transport. But Harley-Davidson made several strategic decisions to challenge the automotive industry. They agreed with their main competitor, Indian Motorcycle, to keep prices equal to prevent undercutting; suspended their racing budget temporarily; increased marketing efforts for international sales; and invested additional capital into advertising for American consumers.[5] Harley-Davidson not only survived the Great Depression but also began to thrive in the late 1930s. Social motorcycle clubs became a major part of Harley culture as riders and spectators gathered at racetracks and obstacle courses; by 1940 there were a dozen Harley-Davidson clubs in Milwaukee alone.[6] Motorcycle production shifted once again after the Japanese attack on Pearl Harbor in 1941, since, once again, Harleys were considered ideal for military operations. Over the course of the war the company manufactured approximately 90,000 WLA military models and even designed a new bike, the XA, for specific use in the North African deserts.[7]

Harley-Davidson rebounded briefly after the war among domestic consumers and in the racing world, but the influx of foreign-made motorcycles undercut the company’s sales, forcing the firm to minimize cost by cutting labor and using inferior parts.[8] Demand slowed and the company faced a deep financial crisis. In 1969, American Machine and Foundry Company (AMF) purchased Harley-Davidson.[9] A dozen years later, Vaughn Beals, along with twelve other AMF executives, finalized the acquisition of Harley-Davidson from AMF. Tariffs protected the company while it revamped its motorcycle designs, facilities, and production strategies. Harley-Davidson’s loyal supporters stood by the company during the transition, and by the 1990s the company surpassed its production projections of 200,000 motorcycles a year.[10] As of 2016, the company employed more than 6,400 employees worldwide, with production facilities in Wisconsin, Pennsylvania, Missouri, India, and Brazil.[11]

Wagner, Herbert. At the Creation: Myth, Reality, and the Origin of the Harley-Davidson Motorcycle, 1901-1909. Madison, WI: Wisconsin Historical Society, 2003. 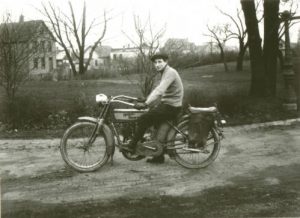