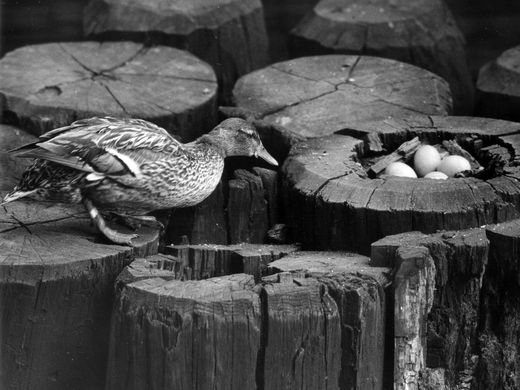 In the spring of 1945, as World War II slowly ground toward Allied victory, a duck laid a clutch of nine[1] eggs on a piling near the Wisconsin Avenue bridge.[2] The eggs’ precarious perch alarmed watchful bridgetenders and attracted the attention of Milwaukee Journal outdoor reporter Gordon MacQuarrie.[3] Over the next two months, his lively series of articles about the duck family’s adventures—complemented by reports in the Milwaukee Sentinel and local radio—drew flocks of human viewers to the bridge to await the hatching of the ducklings. MacQuarrie dubbed the mother duck “Gertie,” although the rival Sentinel sometimes called her “Elizabeth.”[4] As national media, including Life and Newsweek, picked up Gertie’s story,[5] enthralled Americans sent her cards and telegrams.[6]

Gertie’s first duckling, whose misadventures MacQuarrie spun into a tale of the renegade “Black Bill,” hatched on May 30.[7] Most of the other eggs soon followed, but a stormy night and the loss of one in the Milwaukee River prompted the removal of the whole family to firmer ground.[8] The family temporarily relocated to the window of the nearby Gimbels department store[9] before they were paraded east to the Juneau Park lagoon.[10]

The story of Gertie and her five surviving ducklings struck a pleasantly distracting chord among Milwaukeeans exhausted by the war. The Journal and the Sentinel both repackaged their popular articles as books.[11] The City Council ordered the top of Gertie’s piling given to the Milwaukee Public Museum.[12] In following years, writers and artists preserved Gertie’s story in Milwaukee’s collective memory. In addition to later newspaper articles,[13] writers produced a children’s book about her story.[14] In 1997, Gertie and her brood landed on the bridge in the form of a bronze sculpture by artist Gwendolyn Gillen so that new generations of Milwaukeeans can meet the bird who charmed the city.[15] 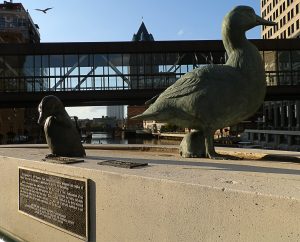 News Coverage of Gertie and Her Ducklings

Are you as entranced by the story of Gertie and her quinducklets as much as the Encyclopedia of Milwaukee staff is? Would you like to read about her adventures as they unfolded at the end of World War II? Follow the citations and links below to read more about Milwaukee’s most beloved family of ducks. If you find contemporary news coverage not on this list, please let us know!