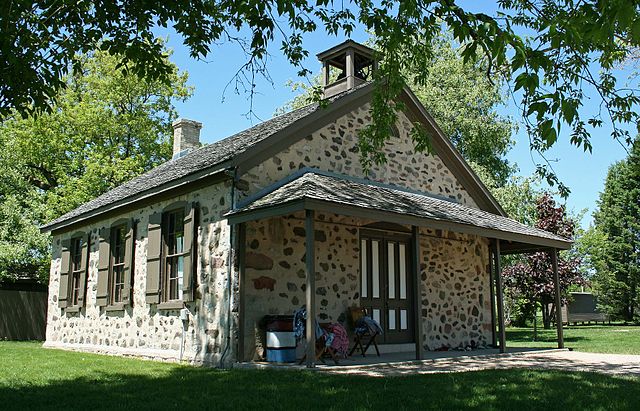 Waubeka was the first community to develop in the Town of Fredonia. The community is noted for being the birthplace of Flag Day. At Stony Hill School in 1885 teacher Bernard Cigrand instructed his students to write an essay on the meaning of the American flag. Cigrand went on to become the most notable proponent for the establishment of a national holiday celebrating the American flag.[5] Waubeka is home to the National Flag Day Foundation and the Americanism Center Museum, which celebrates the history of American patriotism and the American flag.[6]

The first building in what would become the Village of Fredonia, Fredonia Station, was built in 1873 by the Milwaukee and Northern Railway Company (later part of the Chicago, Milwaukee, St. Paul and Pacific Railway) to service the rail line built through the Town.[7] The placement of the rail line shifted urban development from Waubeka to the area surrounding the railroad depot. The Village of Fredonia was incorporated in 1922 with a population of 272.[8] In 2010 the Village had a population of 2,160.[9]

The unincorporated community of Little Kohler was the site of a German prisoner of war camp during World War II. German POWs harvested produce for local farmers and worked in canning plants throughout the region. The labor camp operated from June 1945 until January of 1946.[10]