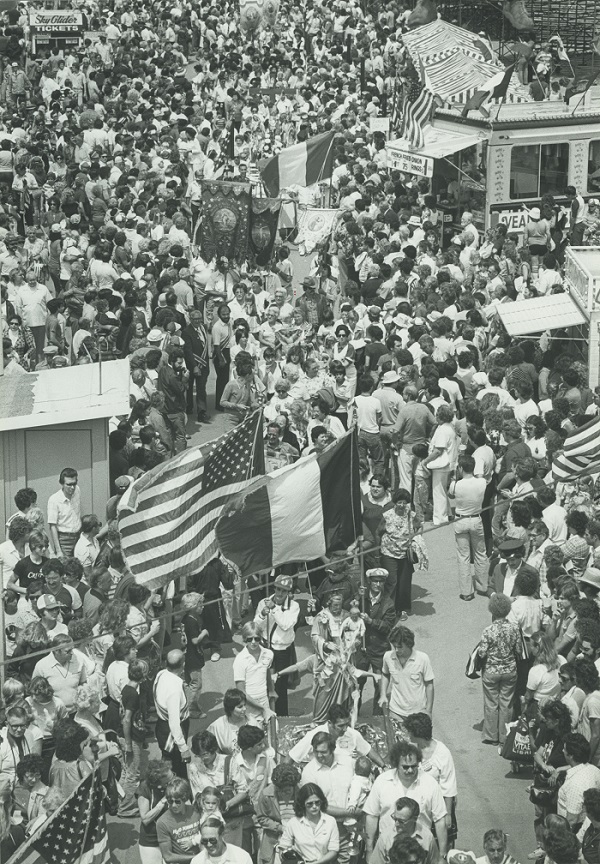 Festa Italiana, held annually since 1978, represented the first of Milwaukee’s modern ethnic festivals and an effort to recapture the spirit of a vanishing community.[1]

In the 1960s, Milwaukee’s urban renewal plans led to the demolition of Our Blessed Virgin of Pompeii Church in Milwaukee’s Third Ward. By the time the little pink church had given way to freeway construction, most of the area’s Italian-American residents had fled to the suburbs.[2] Neighborhood and civic leaders, along interests in re-creating the religious and street festivals from the community’s summers prompted organizers to establish the Festa Italiana in 1978, an event that also marked a larger movement to embrace Milwaukee’s diversity and potentially ease ethnic tensions.[3] Held at the adjacent Henry W. Maier Festival Park on the lakefront, the multi-day celebration became a summertime institution, with attendance numbers typically well over 100,000.[4]

With the little pink church that served as center of the community’s sacred and social festival long since gone—though the site did serve as a pilgrimage in Festa’s early years—music, food, and cultural activities instead anchor the community gathering.[5] Opera, accordions, and strolling musicians serenade the crowds while more mainstream bands round out the soundscape of the occasion.[6] Organizers also strived to re-create the aesthetic of an authentic urban community with a replica piazza, surrounded by the façades of Italian-style buildings. The space serves as a cultural area with photo and art exhibits that chronicle the Italian experience in Milwaukee.[7] Bocce ball courts, gondola rides, and Italian cuisine also help draw thousands every July.[8]