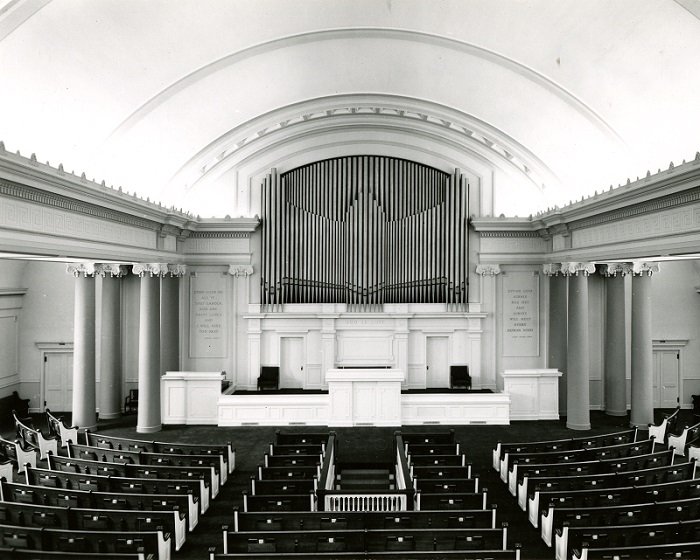 In 1883, Green Bay-area resident Hugh McDonald brought his ill wife, Emma, to Milwaukee for Christian Science treatment. After being healed, Emma McDonald became one of the founders of the Oconto Christian Science community, which in 1886 constructed the world’s first Christian Science church building.[6] Around the same time that the McDonalds learned of Christian Science, Milwaukee residents Dr. Silas Sawyer and his wife Jennie returned to the city as graduates of Mary Baker Eddy’s Massachusetts Metaphysical College.[7] As Christian Science practitioners, the Sawyers founded the Wisconsin Metaphysical Institute, began treating patients, and held religious meetings in their Grand Avenue home and downtown offices.[8] In 1889, the First Church of Christ, Scientist was incorporated in Milwaukee. Three years later the congregation built its first church on Van Buren Street.[9] When the independently founded Second Church merged with First Church in 1905, the combined congregation overwhelmed the small building. Services were subsequently held in rented locations, including the Pabst Theater and Plymouth Congregation Church, until the dedication of a new First Church of Christ, Scientist on Prospect Avenue in 1909.[10]

Along with churches, reading rooms and Christian Science practitioners have been the most visible components of the Church of Christ, Scientist. In addition to church building locations, there has long been a stand-alone reading room on Wisconsin Avenue in the Downtown.[11] Early Milwaukee reading rooms, originally called dispensaries, were bases for Christian Science practitioners.[12] From the dispensaries, practitioners (who were primarily women) ministered to local patients, including the poor and immigrants.[13]

The services of Christian Science practitioners drew contempt from the medical and judicial communities. In 1900, two Milwaukee practitioners were charged with practicing medicine without a license.[14] Brought to trial, the local women were initially convicted for illegally treating a young, dying girl. An appeals court overturned the conviction. By concluding that Christian Science was prayer and not government-regulated medical practice, the court opened the path for the free practice of Christian Science healing in Milwaukee.[15]

While several architecturally important churches were built during the early twentieth-century growth of Milwaukee Christian Science, many large and costly structures were sold by the Church in the 1980s and 1990s.[16] Many are municipally or nationally recognized historic sites.[17] 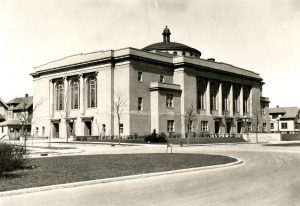