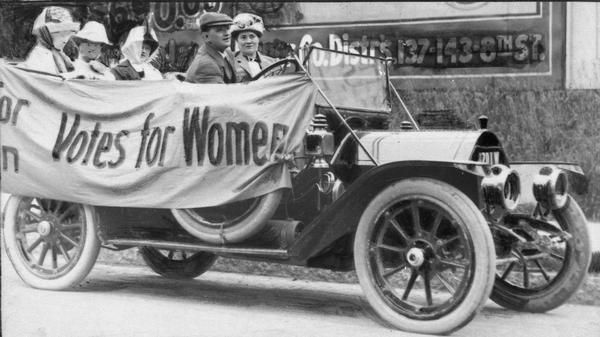 In the 1840s, when settlers from the East and overseas were pouring into Milwaukee and Wisconsin, women did not have political rights to vote, run for public office, serve on juries, or participate in the formal political system. Advocates, however, of what came to be called the “woman movement” were voicing the first calls to change that, most notably at the Seneca Falls Convention in upstate New York in 1848. That moment is generally seen as the start of the movement for women’s suffrage, which was finally won with the nineteenth amendment to the federal constitution, ratified in 1920, which declared, “The right of citizens of the United States to vote shall not be denied or abridged by the United States or by any State on account of sex.”[1]

The movement for suffrage was always a national one, though the actual enfranchisement of women was a piecemeal process across the country, since electoral procedure was and is primarily a matter of state law. In effect, advocates of women’s enfranchisement—overwhelmingly women—had to convince male legislators, who sat in the legislative bodies that could change the laws, or male voters, who could vote in a referendum to enfranchise women, to support their cause. Legislators in sparsely settled western states were the first to enfranchise women, initially in the territory of Wyoming in 1869. The Milwaukee portion of the story of the enfranchisement of women involves the ways Milwaukeeans, mostly women, pressed for voting rights, locally, at the state level, and participated in the national movement.

Substantial and sustained organizational effort on behalf of women’s suffrage in Wisconsin dates from 1869 when Elizabeth Cady Stanton and Susan B. Anthony came to Milwaukee for “the first statewide suffrage convention.” That convention resulted in the founding of the Wisconsin Woman Suffrage Association (WWSA), with Dr. Laura J. Ross elected President.[2] That same year, the state legislature allowed women to run for school boards and school-related public office, but ironically not to vote in those elections.[3]

WWSA chapters were established around the state and by the 1880s began to press for the right to vote in school matters. The legislature put a referendum on the November 1886 ballot to allow  the “exercise of the right of suffrage by women upon school matters.”[4] The measure was approved but immediately became mired in technical problems both over whether women required separate ballots so they would not vote for other offices, and the scope of the new suffrage right. Could a woman vote for a municipal office position if that position also authorized school budgets, or appointed school board members, as was the case in Milwaukee at the time? The ambiguities led to an 1887 test case by WWSA President Rev. Olympia Brown of Racine. She lost in the Wisconsin Supreme Court, leaving the women’s suffrage rights an effective dead letter until 1901, when the legislature authorized separate ballots for school elections.

Women’s suffrage mobilization continued and found new organizational locations, particularly as the women’s club movement grew in the 1890s. Nevertheless, the movement faced stiff opposition, particularly from “liquor interests” and immigrants, notably Germans, because of the association of suffrage leaders with temperance and prohibition measures.[5] In 1911, the legislature again authorized a referendum on women’s suffrage, this time for full suffrage, sponsored by Senator David James. That year, Ada James, daughter of David and Laura James, also a suffrage activist, left the leadership of WWSA, founded the Political Equality League, and recruited Waukesha journalist and activist Theodora Winton Youmans to organize a spirited campaign to garner support for the referendum. In November 1912, Wisconsin’s male electorate voted the referendum down 227,054 against and 135,736 for. In Milwaukee County 40,029 men voted against women’s suffrage; 20,445 voted for it. The votes were similarly lopsided in Waukesha, Washington, and Ozaukee counties, with 61, 83, and 87 percent respectively voting against suffrage rights for women.[6]

After that defeat, the Wisconsin movement, mirroring conflicts in national suffrage organizations, went through a period of soul searching and organizational and leadership change. Youmans took over leadership of the WWSA in early 1913.[7] The WWSA focused on educational efforts around the state, and by the second half of the decade, faced with continued resistance at the state government level, put its energy behind the National American Woman Suffrage Association’s (NAWSA) strategy of pressing for a constitutional amendment at the federal level. Once World War I broke out in Europe in August 1914, the politics of suffrage became indelibly entangled in war politics, preparedness versus neutrality. That in turn riled the complex politics of Wisconsin and its huge German ancestry population. The NAWSA campaign hitched its fortunes to the growing political support for the Allies and “preparedness” and led to further splits in local suffrage organizations as local antiwar supporters and socialists opposed American entry into the war in April 1917. Youmans surrendered her pacifist views to support the war. What became the Nineteenth Amendment to the U.S. Constitution passed the House in January 1918 and the Senate in June 1919. The Wisconsin legislature, so laggard in the long effort to accord women suffrage rights, was the first state to ratify the amendment a week later. In August 1920, the final state needed for ratification voted to support the amendment.[8]

That same year, following the national transformation of NAWSA into the League of Women Voters, the Wisconsin Woman’s Suffrage Association reorganized as the state chapter of the League of Women Voters, which today describes itself as a “nonpartisan political organization,” which “encourages informed and active participation in government, works to increase understanding of major public policy issues, and influences public policy through education and advocacy.” The League is also organized into local chapters around the state, including chapters in Milwaukee and Ozaukee County.[9]

McBride, Genevieve G. On Wisconsin Women: Working for Their Rights from Settlement to Suffrage. Madison, WI: University of Wisconsin Press, 1994.