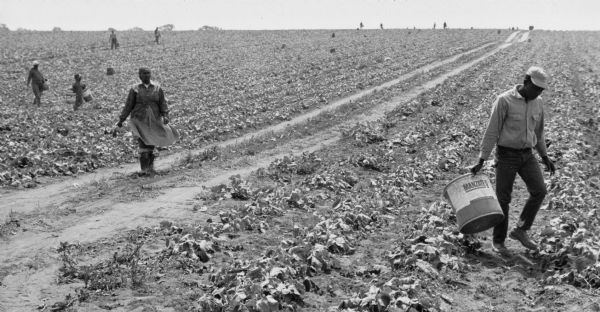 In the early 1960s, up to 15,000 migrant workers, mostly Mexican Americans from Texas, were arriving in Wisconsin each year to harvest crops and work in canneries.[1] However, the increasing mechanization of Wisconsin agricultural production, bad weather, and overproduction that resulted in crops being plowed under instead of harvested left some migrants from Texas without jobs. All these factors added to the migrants’ economic plight and led them to search for work in cities.

In 1966, farmworker activists began actively protesting working conditions in the fields. Jesus Salas and Salvador Sanchez began organizing farmworkers in the state into a new labor union, Obreros Unidos. Within UMOS, a debate arose over how many Latinos and non-Latinos UMOS employed. In 1968, Salas and Sanchez, along with Ernesto Chacon and Dante Navarro, demanded that migrants themselves have a central role in UMOS administration and that UMOS expand its migrant services and more forcefully protest low wages and workplace and housing discrimination.[3] In 1968, these Mexican American activists succeeded in taking control of UMOS away from its five Anglo administrators. After the takeover, the UMOS board appointed the labor organizer, Jesus Salas, as the new director.

In 1968, UMOS relocated its headquarters to S. 8th and W. Greenfield in Milwaukee to a building purchased with Office of Economic Opportunity funds. The relocation was an effort to more closely connect to the largest population of Mexicans in the state. UMOS began providing legal advice, housing assistance, bilingual drivers’ education, and family planning clinics to city residents. But by the early 1970s, federal funding had dropped to $700,000. As a result, UMOS began partnering with a variety of state agencies such as the Department of Public Instruction, the Vocational, Technical, and Adult Education System (now the Wisconsin Technical College System), Division of Vocational Rehabilitation, and the State Manpower Council. It received federal funding through the Comprehensive Employment and Training Act (CETA) to offer job training, as well as English as a Second Language (ESL) and General Education Diploma courses. The Milwaukee Area Technical College (MATC) funded courses on short order cook training. In 1974, Lupe Martinez became UMOS’s fifth Executive Director. He remained in that position in 2015. In the twenty-first century, UMOS provides daycare, early childhood and adult education, job training, ESL, housing and employment assistance, and health services.[4]