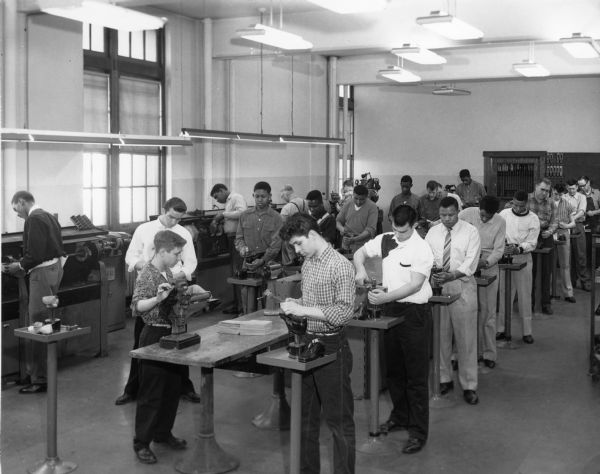 Wisconsin’s organized system of vocational education began in 1911. By 2016, it consisted of sixteen technical colleges and forty-nine campuses under the mantle of the Wisconsin Technical College System. It offers more than four hundred programs designed to train students to enter the workplace, and it is especially known for its offerings centering on manufacturing and technology. It also provides training in business, finance, health science, nursing, education, and other fields. The Milwaukee metropolitan area is served by three such colleges: the Milwaukee Area Technical College, with four campuses (one in Ozaukee County); the Waukesha County Technical College, with one campus and two satellite sites; and the Moraine Park Technical College, with a central campus in West Bend and several satellite sites.[1]

The nineteenth century Industrial Revolution created a demand for workers with technical and vocational training. The National Association of Manufacturers, some labor unions, and the National Education Association jointly sponsored conferences around the United States to formulate plans for vocational schools in the 1870s. It was through their efforts that programs were established in Baltimore, Boston, Chicago, Cleveland, New York, Omaha, Toledo, Washington, D.C., and several other cities by the 1880s.[2]

Wisconsin did not establish a vocational educational system until the twentieth century, although the Milwaukee Public Schools (MPS) had introduced vocational training into its system by 1859 when it was offering drawing classes, instruction that had applications in the skilled trades. By 1873, vocational education expanded throughout MPS, and the school district hired a teacher to train other instructors in vocational education. Teachers attended weekly classes for the first five months of the school year and then attended every other week for the rest of the year. As immigration increased, so did demand for manual training for these new workers. MPS started five evening schools in November 1880. They were immediately overcrowded, so the school board opened thirteen more in December. Two were designated for girls and women, and the rest were for boys and men. Classes were held from 7:30 until 9:30 p.m. on Mondays, Wednesdays, and Fridays for boys and men, and on Tuesdays and Thursdays for girls and women. The average male student was twenty years old and the average female student was eighteen years old.[3]

MPS also began to operate two full-fledged trade and vocational high schools in the early twentieth century. In 1907, it took over operation of the independent Milwaukee School of Trades (later, Milwaukee Trade and Technical High School and now the Lynde and Harry Bradley Technology and Trade School). The school was originally open to boys between ages sixteen and eighteen. In 1909, MPS established a three-year trade school for girls who had completed grade six. The curriculum was based on home economics and secretarial skills.[4]

The State of Wisconsin established a network of vocational schools in 1911 at the urging of Dr. Charles McCarthy, librarian of the state’s Legislative Reference Library. McCarthy was born to Irish immigrants in 1873 in Massachusetts and grew up poor. He took vocational classes in high school and earned his bachelor’s degree from Brown University. He later received a doctorate in history from the University of Wisconsin in 1901. Brown’s life experiences convinced him of the need to establish a vocational education program in Wisconsin similar to the one in Massachusetts. At the time, many children entered the workplace after the eighth grade. Wisconsin high schools were typically for university preparation only. McCarthy proposed a system of vocational schools that would offer a part-time day program to working students who were ages 14 to 16 and wanted training for careers in industry or agriculture.[5]

The new vocational school system was supervised by the state Department of Public Instruction with input from an advisory board of business and labor leaders, the University Extension System, and the UW School of Engineering. Cities with populations of more than five thousand were required to establish a vocational school and a local administrative board. Employed children were required to attend school five hours per week and unemployed children were required to attend full time. Thirty-two cities established boards by 1912. Instruction consisted of the part-time and full-time programs, an apprentice school, and an adult evening program. By 1916, the day-school maximum age had been raised to seventeen. The state-wide program grew, and by the 1929-30 school year, there were 35,892 students in the day program and 48,490 students in the night program. The required attendance age was raised to eighteen in 1932.[6]

The Milwaukee Vocational Schools’ mission began to shift toward college-level instruction when it began its programs in registered nursing and teacher education in 1923 and its junior college program a decade later. The school offered schooling for work in war industries during World War II and training for Korean War veterans beginning in 1952. A few years earlier it had changed its name to the Milwaukee Vocational and Adult School to better reflect its new demographics. By 1962 it had an enrollment of 18,220 students. The Milwaukee school merged in 1969 with other nearby vocational schools into the Milwaukee Area Technical College (MATC). More than thirty-eight thousand students were enrolled in 2014-15.[7]

Greiber, Clarence L. The Wisconsin Venture: A Developmental History of Vocational, Technical and Adult Education. Madison, WI: Center for Studies in Vocational and Technical Education at the University of Wisconsin-Madison, 1975. 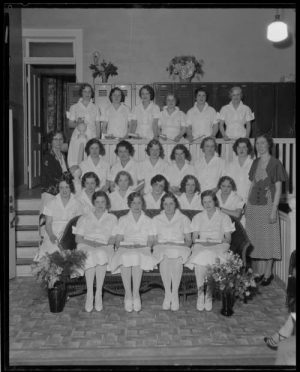 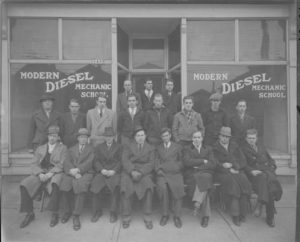