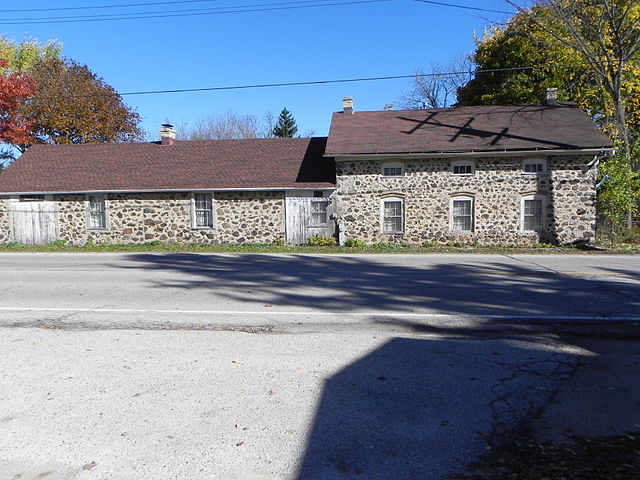 Located in west-central Washington County, the Town of Addison borders Dodge County to the west, the Town of Wayne to the north, the Town of Hartford to the south, and the Towns of Barton and West Bend to the east.[1] Settled predominantly by Germans following the regional completion of the U.S. Public Land Survey,[2] the Town of Addison incorporated on January 21, 1846. Early residents were crop and dairy farmers. Several sawmills within the town harnessed the Rock River and processed the area’s abundant hardwood timber supply.[3] By the late nineteenth century, the Town was served by three post offices, located in the hamlets of Addison Center, Nenno, and Aurora.[4]

Two major thoroughfares intersected in the Town of Addison. The east-west Dekorra (also Dekora, Decorra, or Decorah) Road was one of the first roads surveyed and constructed in the State of Wisconsin, opened by General Henry Dodge in 1832-33. It linked the far western part of the state to Port Washington on Lake Michigan.[5] Founded in 1912, the Yellowstone Trail Association sought to link the east and west coasts of the United States along a northern corridor. Spanning 3,754 miles, the result was one of the first transcontinental automobile routes, a portion of which runs on a north-south path through the Town of Addison.[6] The roads meet in Addison Center, the modern-day intersection of State Trunk Highway 33 and State Trunk Highway 175.[7]

The largest of the unincorporated communities within the Town of Addison is Allenton, which maintains its own sanitation and sewer systems. Originally known as Dekorra, Allenton was founded in 1882. Located on the shore of the Rock River in the central portion of the town, Allenton’s residents settled near a depot of the Wisconsin Central Railway that connected Schleisingerville (now called Slinger) with Fond du Lac.[8] Allenton makes up 1.45 square miles within the Town of Addison and in 2010 contained a population of 823 residents.[9] Other unincorporated communities within the town limits include Addison Center (also called Addison), Nenno, and St. Anthony. The hamlet of St. Lawrence spans both the Town of Addison and the Town of Hartford. Both St. Lawrence and Allenton host fire departments that also serve the surrounding area.[10]

Located near the hamlet of St. Lawrence, the Ritger Wagonmaking and Blacksmith Shop is one of twenty-six locations in Washington County listed on the National Register of Historic Places. Built in 1867 of fieldstone and heavy mortar, the structure was in continuous use as an industrial space, vital to the surrounding area and serving the entire state until the early twentieth century.[11]

The 2010 U.S. Census counted 3,495 residents in the Town of Addison. With ninety-seven residents per square mile of land, the town hosts one of the lowest population densities in all of Washington County.[12] The town is home to two wildlife areas along the East Branch of the Rock River: the Theresa Wildlife Area and the Allenton Wildlife Area. They account for nearly fifteen percent of the town’s land, or 3,348 acres.[13]