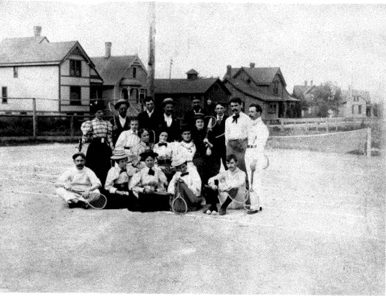 Tennis traces its roots back to the early 1300s, but it emerged in its modern form as “lawn tennis” in England in 1874.[1] The sport became immensely popular with the upper middle classes, who were challenging the power of the old aristocracy in the late Victorian era. The surging bourgeoisie still aped the ways of the landed classes, however, and tennis clubs featured flower shows, bazaars, and other polite entertainments. Tennis differed from other sports of the empire—soccer, cricket, and rugby, for example—as it celebrated mental discipline and self-help. New tennis organizations usually included women, and tennis clubs provided important opportunities for social match-making and class solidification.[2]

Lawn tennis caught on quickly in the United States. Here the wealthy commercial and financial elites did not confront an inherited power structure like that in England and thus had the courts to themselves. In Milwaukee, small clubs formed in the 1880s and played on clay surfaces. Local newspapers often observed the advent of tennis with interest. One cited the opinion of a “well-known physician,” who observed that young female players had skin “as smooth and polished as satin” to a degree unknown previously.[3] Of course, much was made of the prevailing court dress, an aspect of high fashion as the Bay View group illustrates (see image).

But the sport had its take-off point with the founding of the Town Club in 1901. Affluent Milwaukee “Yankees” had been moving north of the Yankee Hill area and Prospect Avenue had become the “gold coast” of the city. The Town Club owed its creation to the resolve of Thomas Henry Spence, a graduate of Phillips Academy in Massachusetts and Yale University. The Club, located at Brady Street and Prospect Avenue, featured social and cultural activities, but tennis remained the major focus. It flourished there for decades, but a fire destroyed the main building in 1953. In fact, however, wealthy Milwauakeeans had been leaving the Prospect neighborhood for some time, moving into the northern suburbs. The Town Club made the logical decision to follow them and it rebuilt in Fox Point.[4] And it did so just in time. Brady Street was about to emerge as Milwaukee’s prime locus of the 1960s counterculture.

In the ensuing decades, other clubs for tennis emerged in the pattern of the Town Club, increasingly offering indoor tennis.[5] But the sport grew significantly on the public side as well. In this “city of parks” tennis made its public debut in 1902 at Washington Park. Five other parks followed suit by 1914. Milwaukee’s park movement owed much to the Socialists, who governed the city for almost all the years between 1910 and 1960. But the parks movement had the support of the city’s social elite as well, and by the 1970s asphalt courts on thirty-two county parks had over 100,000 users per year.[6]

Milwaukee tennis has often made an impact at the national level. In 1944 and 1945 Frank Parker, who began his tennis career as a ball boy at the Town Club, won the US Men’s Open tournament. In 1975 the Milwaukee Tennis Classic began a long tenure in the city, beginning that year at Marquette University and hosting prominent collegiate teams. Devotees of tennis also have worked to bring opportunities to play tennis to a wider segment of the city’s population. The Milwaukee Tennis & Education Foundation grew from the Tennis Classic. It has served some 34,000 Milwaukee-area children, many from the inner city, with after school and summer programs, teaching both literacy and tennis. 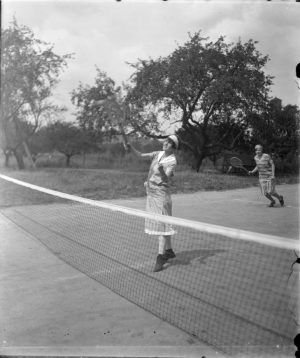