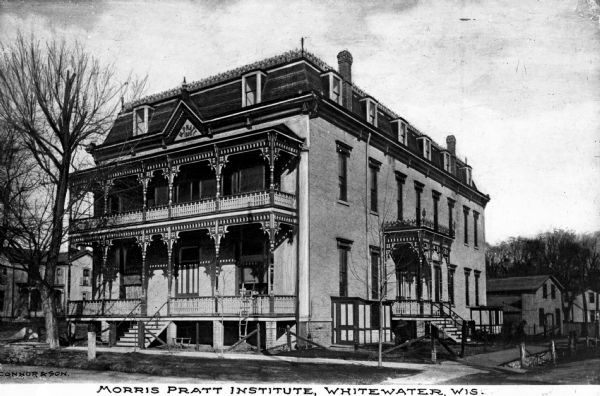 In 1848, the Fox sisters reported communicating with spirits through rappings in their Hydesville, New York home.[1] Sparked by this revelation, Spiritualists began forming churches and spirit circles throughout the United States in hope of similarly contacting the dead.[2] Wisconsin became a center for the Spiritualist movement, which counted among its followers such dignitaries as the Wisconsin Historical Society’s Lyman Draper and Territorial Governor Nathaniel Tallmadge.[3] The first Milwaukee Spiritualist congregation was founded in 1851.[4] Although the movement’s popularity waned after the 1920s, the Milwaukee area counted three congregational affiliates of the National Spiritualist Association of Churches in 1948.[5] The First Spiritualist Church of West Allis is the sole remaining local congregation.[6] The nation’s only Spiritualist college, the Morris Pratt Institute, is located in Wauwatosa.[7]

This institution, which opened in Watertown, Wisconsin in 1903, grew out of Walworth and Jefferson Counties’ strong Spiritualist communities.[8] Morris Pratt, a follower of renowned local medium Mary Hayes Chynoweth, constructed an elaborate Watertown home for the college.[9] Classes were offered in traditional subjects as well as uniquely Spiritualist fields.[10] Facing declining enrollment and financial difficulties in the 1930s and 1940s, the school relocated to Wauwatosa in 1947.[11] The Institute continues to offer correspondence courses, on-site short courses, and a research library.[12]

While accounts differ, it is possible that Leafy Anderson, founder of the African-American Spiritualist movement in New Orleans, was born in Wisconsin.[13] The Theosophical Society in America, whose founders pursued Spiritualism before codifying beliefs different from traditional Spiritualism, maintains a presence on Milwaukee’s East Side.[14]

Bednarowski, Mary Farrell. “Spiritualism in Wisconsin in the Nineteenth Century.” Wisconsin Magazine of History 59, no. 1 (Autumn 1975): 3-19.