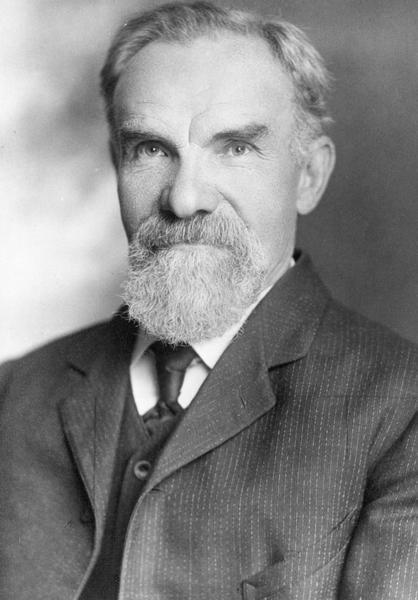 Robert Schilling (1843-1922) was a significant labor leader and reformist politician in Milwaukee in the late nineteenth century.

Born in Osterburg, Saxony, Schilling migrated with his family to St. Louis in 1846.[1] He began work as a cooper at thirteen, and, fluent in both German and English, quickly became a prominent leader of the Coopers’ International Union (CIU).[2] While working for the CIU in Cleveland, Schilling chaired Ohio’s Greenback-Labor party from 1874 to 1880 and joined the Knights of Labor in 1875.[3]

After a brief visit to Milwaukee in 1877 to assist Edward P. Allis’s Greenback party gubernatorial bid, Schilling permanently moved to Milwaukee in 1880 to edit the city’s German language Greenback party papers, Der Reformer and Volksblatt.[4] He became state organizer for the Knights of Labor and president of the Knights’ Milwaukee assembly in 1881. In 1886, Schilling organized Milwaukee’s Eight-Hour League with socialist rival Paul Grottkau. Openly opposed to the militancy of the League’s May 1 general strike, Schilling was nevertheless arrested and tried after the Bay View tragedy. He was not convicted.[5]

Vowing to “gain revenge—by the ballot,” Schilling helped organize a Milwaukee branch of the Union Labor Party (ULP) in 1886—one of the nation’s early political alignments of greenbackers, populists, and socialists—and became the party’s national secretary in 1888.[6] After the Socialists split into the Socialist Labor Party, Schilling reorganized the ULP under the new national People’s Party, serving as national secretary in 1891 and head of the Wisconsin branch from 1892-1900.[7] Schilling maintained a bitter rivalry with Milwaukee Socialists like Grottkau and Victor Berger throughout his political career and helped organize a Democrat-Populist fusion ticket for David Rose’s successful mayoral election against the Socialists in 1898.[8]

Schilling left politics in 1900 to establish a milk distribution company on the city’s north side (6th and Concordia), specializing in the “scientific preparation” of milk for nursing infants.[9] He retired in 1916, turning his business over to his son, Walter, and built a hall for spiritualist mediums to converse with the dead.[10] He briefly emerged from retirement to oppose American entry in World War I.[11]