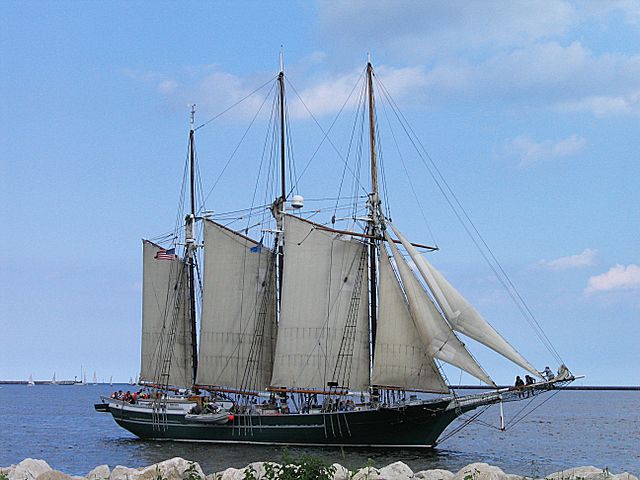 The Sailing Vessel Denis Sullivan is a replica three-masted Great Lakes schooner.[1] In the 19th century, schooners were the most common means of transporting bulk commodities on the Great Lakes.[2] In 1991, a group of Milwaukeeans began recreating a three-masted schooner.[3] They formed the Wisconsin Lake Schooner Education Association (WLSEA), a non-profit foundation with the mission of using a replica schooner to teach about the Great Lakes and Wisconsin’s maritime history.[4] Timothy Graul Marine Design’s plan for the vessel was a composite of several different 19th century schooners.[5] While the overall appearance of the vessel above the waterline is fairly true to its predecessors, several below-deck changes (including auxiliary engines) comply with Coast Guard regulations and the mission of the ship.[6] The schooner was named the S/V Denis Sullivan after one of the most famous Great Lakes ship captains.[7]

Work began on the Denis Sullivan in 1996 after the Menominee Nation donated six white pine trees harvested from their forest.[8] The ship was completed in 2000 after more than 300 volunteers put in almost a million hours of time under the direction of professional shipwrights.[9] WLSEA changed its name to Pier Wisconsin by 2002. Until 2022 the vessel was owned by Discovery World at Pier Wisconsin on Milwaukee’s lakefront.[10] The Denis Sullivan conducted educational day and overnight sailing trips throughout the summer months and sometimes spends the winters in warmer water off of Southern Florida.[11] In 2022, as a result of fiscal strains due to the COVID-19 pandemic, Discovery World sold the S/V Denis Sullivan to World Ocean School, a nonprofit organization that planned to operate the ship in the Boston area.[12]