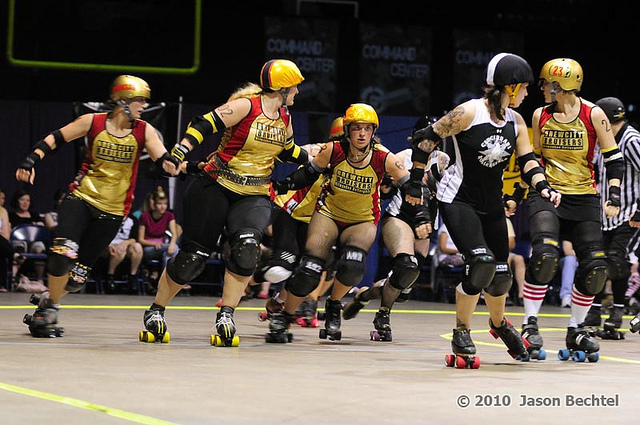 Roller derby was a sports entertainment phenomenon in the 1950s, gained a new generation of fans via television in the 1970s, and underwent a twenty-first century resurgence with a feminist impulse. As part of this third wave of organized roller derby, the BrewCity Bruisers began holding “bouts” in 2006 at the Milwaukee County Sports Complex. The league’s mission is “to deliver a quality women’s sport to Milwaukee and the greater derby community.”[1] The Bruisers, a four-team skater-owned and operated league, began competing at the U.S. Cellular Arena in 2010 and are members of the Women’s Flat Track Derby Association.[2] Milwaukee’s men’s team, the Milwaukee Blitzdkrieg, was founded in April 2009 and competes in the Men’s Roller Derby Association.[3]