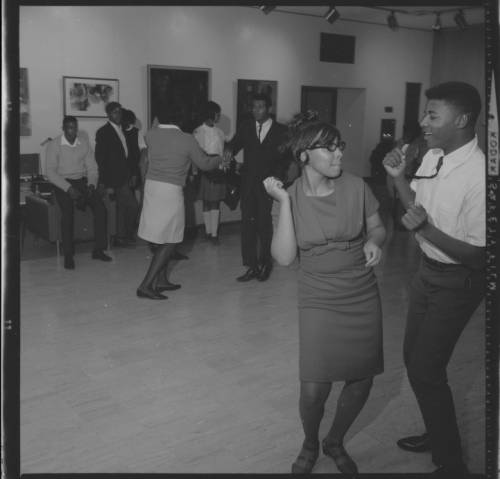 The practice of dancing for amusement in Milwaukee dates back to the area’s pioneer days. By the 1840s, notices for formal dances appeared in local newspapers. These dances, promoted as “balls,” were held at hotels and often raised money for charitable purposes.[1] Soon, a number of dance schools were operating in the city. These institutions offered instruction for young “missus and masters” in formal dance.[2] In 1850, the Milwaukee Sentinel praised the schools and the balls they inspired, writing that the events were the highlights of the season.[3]

But the $6 fee often charged for lessons was beyond the means of most of the laboring class, who turned to dance halls, which offered live music and refreshments (often alcoholic) for a small admission fee.[4] The first dance halls in the city were operating by 1850.[5] The allegedly immoral behavior of their patrons often raised the ire of city leaders and the clergy,[6] and the city eventually banned their operation on Sundays.[7] Sunday dancing and drinking was a tradition of the city’s German residents, but others saw the practices as, in the words of the Sentinel, “outrages upon religion, law, and order.”[8] Courts eventually overturned the laws.[9]

Dance halls remained a popular and controversial retreat into the 1910s, as did society and charity balls. Dance halls like downtown’s Dreamland Ballroom tried to bring an air of respectability to the business by barring unescorted women.[10] Novelty and fad dance steps also began to appear in the city in these years, although some were modified. In 1914, for instance, outsiders praised Milwaukee for its “modest” version of the tango, free of the “objectionable features” of the dance that were practiced in other cities.[11] During the 1920s, Milwaukeeans of the “flaming youth generation” participated in Charleston dance contests.[12]

For those who could not find a partner, a number of Taxi Dancing halls were operating in the Milwaukee area by the early 1930s. These places employed young women who danced with male patrons in exchange for a small fee.[13] Mostly operating on the outskirts of the city, Taxi Dancing was condemned as a breeding ground for immorality and prostitution.[14] In 1932, the county outlawed the practice.[15]

Later in the decade, Milwaukee caught Jitterbug fever, which excited youth, who entered Jitterbug contests by the thousands but alarmed some adults because of its alleged indecency.[16] In 1948, the Milwaukee Journal declared that the Polka had usurped the Jitterbug, a change that was embraced by the city’s elders. A 1948 polka dance at the city auditorium drew over 8,000 people, ranging from children to grandparents. The attendees included Mayor Frank Zeidler, who was on hand to present the event’s “polka king” trophy.[17]

But while Polka was a largely non-threatening trend, more dangerous aspects of the post-war youth culture manifested themselves in the Be-bop fad that emerged on Milwaukee’s south side in the late 1940s and early 1950s. The Journal first reported on the trend in 1949, portraying it as only one part of a larger lifestyle that included dress, language, and “far left” music.[18] Municipal and church leaders opposed the fad and school administrators supported bans on the “sloppy” clothing associated with Be-bop. Beyond the typical worries about the sexualized nature of the dance steps, opponents of the trend openly worried about race-mixing, recounting sensationalized claims of young Milwaukee girls forced into “illicit relations with negroes” at Be-bop parties.[19]

In the late 1970s, the concept of popular dance as a status indicator, first seen in the city with the formal balls of the 1840s, returned in the form of Disco. Clubs like the Sand Dollar in Franklin, the Planet Circus on South 2nd Street, and Park Avenue on Water Street, imitated the discos of New York City by charging high cover fees and enforcing strict dress codes.[20] But while admission to these clubs was exclusive, the disco steps were not. In 1978, the Journal reported that organizations like the YMCA and the Jewish Community Center were offering classes in disco dancing.[21]

By the early 1980s, the changing racial makeup of Milwaukee’s youth was reflected in the emergence of break dancing on the city’s south side. While the disco fad presented none of the moral panic that was aired in response to the allegedly harmful race-mixing of the be-bop trend, it was portrayed by commentators as a race-neutral phenomenon. But coverage of break dancing in the city presented it as a trend with its roots in the Latin and African American communities. Harkening back to the days of the Charleston and Jitterbug, break dancing contests drew hundreds. Team competitions debuted in Milwaukee at the Mitchell Street Festival in 1983.[22]

The major fad dance of the 1990s was most visible outside of the bar and club scene. The Macarena swept Milwaukee and the rest of the nation and, by 1996, was threatening to replace the Chicken Dance, a polka step done to a tune written by Milwaukee native Bob Kames, as the local wedding favorite.[23] But the Macarena fad did not last and, as it had in the past, Milwaukee showed an allegiance to polka. The Chicken Dance is still a local favorite at weddings, parties, and sporting events.[24]

The dance scene in Milwaukee today is concentrated in, but not limited to, the clubs and bars of downtown and Walker’s Point. The polka is still in fashion at Kochanski’s Concertina Beer Hall on South 37th Street and on fish fry Fridays at the Lakefront Brewery.[25] Dancing schools like the Fred Astaire studio still offer instruction in classical steps.[26] And dances of all kinds are still staples of weddings, proms, and other local social activities. 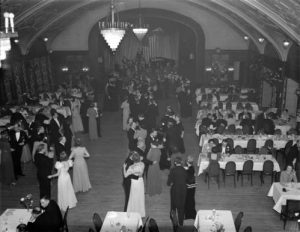