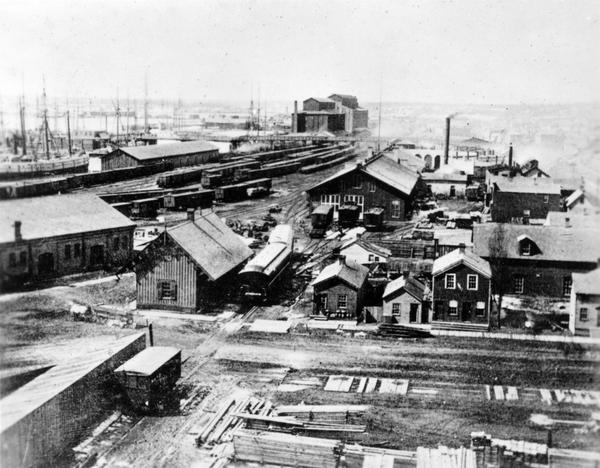 Milwaukee’s first railroad, the Milwaukee and Waukesha Railroad, formed in 1847. It became operational in 1850, when the first tracks were laid to Elm Grove, Wisconsin, and reached Waukesha in 1851.[1] Their first station, located at Second Street and St. Paul Avenue, near the current Amtrak station, was a small, two-room, building of a utilitarian, board and batten design, with a wooden passenger platform.[2] One room served as the passenger waiting area, the other for the station operator. Each room heated was heated by a pot-bellied stove.

The population of Milwaukee was quickly rising, from 20,061 in 1850 to 45,246 in 1860.[3] This rapid growth required the building of a new station, located on Reed Street, used by the Chicago, Milwaukee & St. Paul Railroad, Milwaukee and Northern Railway Company, and the Wisconsin Central Railroad.[4] The old building was moved and kept in use for departing travelers.

By 1880, Milwaukee’s population rose to 115,587.[5] This growth facilitated the construction and opening of the Chicago, Milwaukee & St. Paul’s Everett Street Depot, in 1886, providing a grand entrance to Milwaukee. This depot, featuring a 140-foot-high clock tower, was designed by renowned Milwaukee architect, E. Townsend Mix. In his design for the station, Mix drew on a combination of Gothic Revival style, as well as Queen Anne and Romanesque Revival styles of architecture.[6]

The Everett Street Depot served until August 4, 1965,[7] when train operations were moved to a newly-built Milwaukee Road Station (now known as the Milwaukee Intermodal Station). The Everett Street depot suffered a fire of unknown origin one week after it was closed. This former grand entrance to Milwaukee was torn down in 1966.[8]

Milwaukee County purchased the Lake Front Depot for $7 million, planning to demolish it to make way for a new freeway. Efforts were made to save the depot from demolition. Those efforts failed, and the depot was demolished in 1968.[10] The struggle to save the Lake Front Depot sparked Milwaukee’s historic preservation movement, leading to the creation of Land Ethics, Inc., which eventually became Historic Milwaukee, Inc.

The modernistic-style Milwaukee Intermodal Station, designed by Donald L. Grieb and Associates of Milwaukee, is located at 433 West St. Paul Avenue. It was built by the Milwaukee Road and opened on August 3, 1965. The station is now owned by the Wisconsin Department of Transportation, which utilizes the third floor for their Statewide Traffic Operations Center. In 2007 the station was given a $16.9 million renovation.[11] More than 1.3 million passengers use this depot each year to board the Milwaukee-Chicago Hiawatha Service and Amtrak’s Empire Builder passenger trains. Numerous bus companies, including Milwaukee County Transit System, also utilize the Milwaukee Intermodal Station.[12]

A number of smaller railroad stations were built in the Milwaukee area to serve outlying communities as a link to the Everett Street and Lake Front train stations. Today, a number of these smaller early train stations still exist in the greater Milwaukee area. Many of them are listed in the National Register of Historic Places. 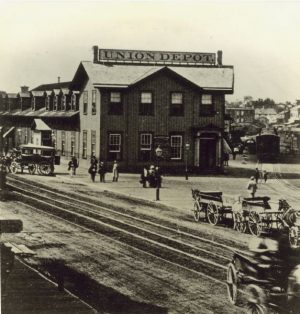