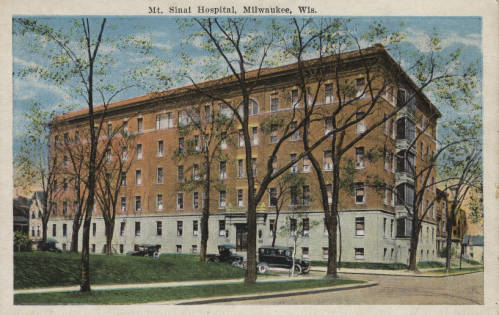 The only Wisconsin Jewish hospital opened in Milwaukee in June 1903. It was founded as a nonsectarian hospital at a time when most private religious hospitals established hospitals for their religious communities.[1] Although the Jewish community in Milwaukee opened the hospital to treat the large Jewish immigrant population, many of whom arrived with very little money and few resources, the hospital has treated more gentile than Jewish patients during its long history.[2]

Two men worked together to raise funds for the hospital: Rabbi Victor Caro of Congregation B’ne Jeshurun and Abraham Slimmer. Caro began raising money in Milwaukee but eventually contacted Slimmer, a wealthy Jewish farmer from Iowa. He pledged five thousand dollars toward the new hospital, but only if community members matched that amount through donations. The community raised the required amount. The original hospital was small and occasionally had to turn patients away. The institution soon moved to a larger building at 12th and Kilbourn Avenue.

Mount Sinai Hospital was instrumental in development of the Jewish medical profession in Milwaukee. Jewish doctors were historically barred from practicing at other hospitals. The hospital provided them with a facility to establish their practices. Medical students cared for patients as part of their education and did not receive a salary. Mount Sinai opened a nursing school in 1924.[3] These students also provided patient care as part of their training.

Mount Sinai was a Jewish community hospital. Jewish men served on the hospital board. The Jewish community supported the hospital through donations and volunteerism. The Ladies Auxillary provided a great deal of support in both fundraising efforts and hospital operations. They held an annual Donation Day and community ball to fund services. The women also worked in the hospital. They made linens, prepared bandages, and assisted patients. During the Great Depression, Mount Sinai opened an occupational therapy department in the Dispensary. Ladies Auxiliary members staffed the new department. In 1965, the Medicaid and Medicare programs provided money for patient care. Fundraising slowed, and donations for patient care eventually ceased.

In 1972, the hospital became Mount Sinai Medical Center. Two new departments opened at that time—the Cardiac and Orthopedic units. The Board hoped to open a medical school, but that effort ended when the Medical College of Wisconsin opened at the new Milwaukee County Regional Medical Center in Wauwatosa. In 1974, Mount Sinai created a partnership with the University of Wisconsin-Madison. Doctors trained students in the Emergency Department, but a medical school never opened at the hospital.

In 1982, funding for the Medicaid and Medicare programs decreased. The community no longer provided donations for patient care. Hospitals suffered financially. Many hospitals in urban areas merged their facilities to avoid closing. In 1987, board members at Mount Sinai voted to merge with Good Samaritan Medical Center and created Sinai Samaritan Medical Center. In 1992, Aurora Healthcare Systems acquired Sinai Samaritan and renamed it Aurora Sinai. That hospital remains at 12th and Kilbourn Avenue. It is one of the few hospitals left within Milwaukee’s city limits.