Built as a horse track in 1876, the Milwaukee Mile hosted its first automobile race in 1903. Known as the oldest continuously operated motor speedway in the world, the Milwaukee Mile is on the grounds of the Wisconsin State Fair Park, located in West Allis since 1891.[1]

The track held open wheel championship races under four different sanctions (American Automobile Association, United States Auto Club, Championship Auto Racing Teams, and INDYCAR) from 1933-2009, and again from 2011-2015.[2] For many years, the first race after the Indianapolis 500 (traditionally held on Memorial Day weekend) was held at the Milwaukee Mile, signaling its importance. The NASCAR Busch Grand National Series first raced at the track in 1984-1985 and again from 1993-2009. The Milwaukee Mile hosted the NASCAR Craftsman Truck Series 1995-2009.[3] For decades, the USAC Championship open wheel and stock car races were among the biggest draws at the late summer Wisconsin State Fair.

The track underwent a massive renovation in 2002-2003, including the construction of a new main grandstand and the installation of 40,000 new spectator seats.[4] Inside the track, a 1.8-mile road course hosted sports car and motorcycle races; a ½ mile track for horse racing; and from 1954-1967, a ¼ mile oval dirt track for local modified races. Between 1934 and 1951, the Green Bay Packers played occasional home football games in the infield, which was nicknamed “The Dairy Bowl.” The track hosted the 1939 NFL Championship Game, a 27-0 Packers victory over the New York Giants.[5] In July 1969, the track hosted the Midwest Rock Festival, which featured Led Zeppelin, Blind Faith, and Joe Cocker, among others.[6] 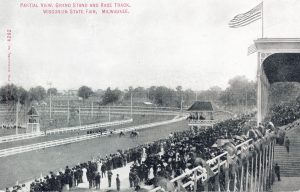