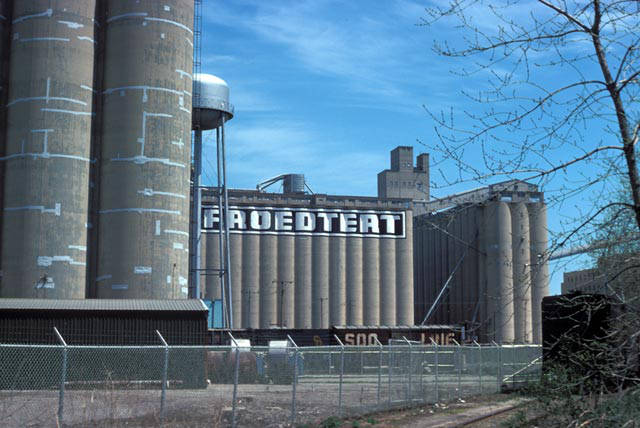 Milwaukee’s malting industry grew out of its iconic brewing industry. Beginning in the mid-to-late nineteenth century, a variety of firms emerged in the city that processed barley and other cereal grains into malt, a key ingredient in the brewing of beer. As Milwaukee became a national leader in brewing, it also grew into a significant national leader in malt production, becoming the largest national supplier of malt by the mid-1950s.[1]

Milwaukee’s pioneer brewers first relied on malt shipped in from the East Coast, but soon they developed their own in-house malting operations with grains from the surrounding hinterland.[2] Recognizing a growing demand for malt in the city’s bourgeoning brewing industry, a few early brewers and other entrepreneurs established independent, specialized malt houses. For instance, William Gerlach purchased the old Eagle Brewery in 1867 and converted it into one of the city’s largest early malting firms.[3]

The demand for malt continued to increase as Milwaukee’s major brewers industrialized their operations after entering national and global markets in the late nineteenth and early twentieth centuries. Malting technology improved to produce a more consistent product in larger quantities, leading the city’s brewers to expand steadily their malting facilities. After a major fire destroyed much of the brewery in 1879, for instance, the Pabst Brewing Company installed a large mechanized malt house in its new industrial complex.[4]

Major independent industrial malting firms also emerged. In 1875, Jacob and William Froedtert expanded their grain and feed business to include malting facilities. The Froedtert Grain and Malting Company eventually outgrew its original location and moved to a large modern complex in the budding industrial suburb of West Milwaukee in 1920 where it quickly grew into a national industry leader.[5] Herman Ladish, a manager at the American Malting Company (a satellite of a New Jersey firm of the same name) in Walker’s Point, formed another key Milwaukee malting firm, purchasing a controlling stake in the Lytle-Stoppenbach Malting Company of Jefferson Junction, Wisconsin. The renamed Ladish-Stoppenbach Company (later Ladish Malting Company) expanded their operations in the Milwaukee area through the early twentieth century, building a large industrial malting complex near Froedtert in West Milwaukee. Ladish’s experience with malting machinery also prompted his successful venture into machinery production, establishing an enterprise later named the Ladish Drop Forge Company in 1905.[6]

On the eve of national prohibition, malting was the city’s eighth largest industry, reporting an annual production value of $21 million.[7] Although Prohibition temporarily curtailed commercial brewing, the city’s malting industry remained relatively strong as brewing giants like Pabst and Schlitz fell back in part on their malting operations for survival. Grains that had previously made beer were then used to produce an array of malt-based products, including sweeteners, powders, extracts, and tonics.[8]

Milwaukee’s malting industry continued to grow through the mid-twentieth century as the state became, as noted earlier, the nation’s largest producer of malt in the 1950s.[9] However, the local industry waned in the late twentieth and early twenty-first centuries in the wake of globalization, consolidation, and a decline in commercial brewing in Milwaukee. A group of French investors purchased the Froedtert Malt Corporation under their parent company, the International Malting Corporation, in 1986. Seventeen years later, this corporation closed its Milwaukee operations.[10] Minnesota-based food giant Cargill, Inc. purchased the Ladish Malting Company in 1991, forming the world’s largest malting firm. After closing malting facilities in Jefferson and Sheboygan in 2004-05, Cargill then reversed itself and reopened the latter in 2007.[11]

While the industry’s heyday in Milwaukee has largely passed, evident only in towering, vacant grain elevators that mark the sites of former malting giants, the revival of craft brewing has generated new life in the old tradition. In 2015, a group of Milwaukee malt industry professionals formed Proximity Malt (headquartered in Milwaukee, but with plants in Colorado and Delaware) that serves national markets of craft and home brewers.[12]