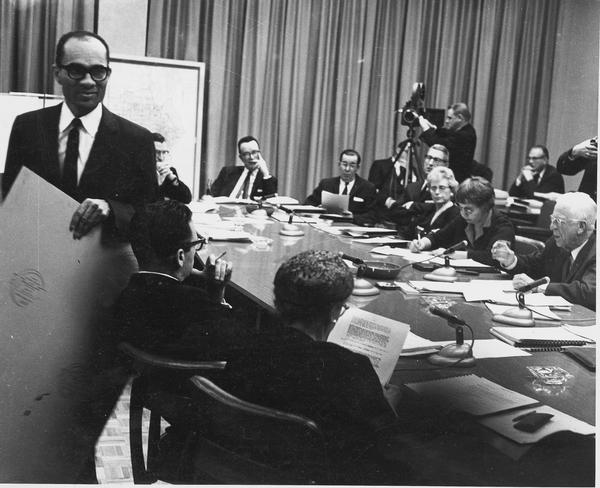 Lloyd Barbee (1925-2002), born in Memphis, came to Milwaukee in 1962. An African American attorney committed to equal rights for all, in 1973 Barbee began a sustained drive to integrate Milwaukee’s racially segregated public schools. The Barbee-led movement of blacks and whites used educational picketing, marches, non-violent civil disobedience, and three school boycott campaigns, but failed in the end to get the school board to significantly desegregate. In 1965, Barbee filed suit in federal district court, and in January 1976, Judge John Reynolds ruled the Milwaukee Public Schools were deliberately segregated and ordered desegregation to begin in September 1976. With an out-of-court settlement in 1979, Barbee could claim an impressive victory: by the mid-1980s, 85% of Milwaukee students were in integrated schools, one of the most far-reaching and peaceful school integrations in the country.[1] From 1965 to 1977 Barbee also served in the Wisconsin State Assembly, where he became noted as a defender of civil liberties.

Dahlk, Bill. Against the Wind; African Americans and the Schools in Milwaukee, 1963-2002. Milwaukee: Marquette University Press, 2010.