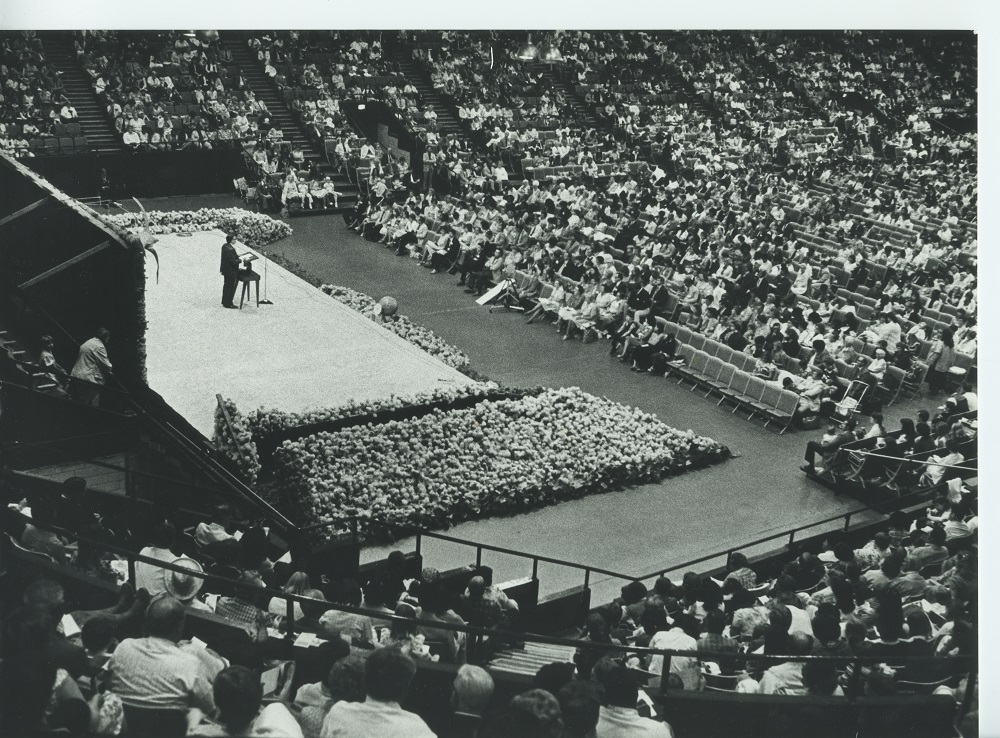 In 2015, the Watchtower Bible and Tract Society—the publishing arm of the Jehovah’s Witnesses—counted a monthly average of 1,195,081 actively preaching Jehovah’s Witnesses in the United States.[1] While the Society does not keep numbers for individual communities, a 2014 Pew Research Center survey estimated that roughly one percent of adult Wisconsinites self-identified as Witnesses.[2] In the 2010s, Milwaukee-area Witnesses worshipped in twenty-one local congregations at Kingdom Halls in all four Milwaukee-area counties.[3]

The first Jehovah’s Witnesses, at the time known as International Bible Students, arrived in Milwaukee in 1896.[4] Little is known about these early Witnesses or the growth of their movement in Wisconsin. Charles Russell, the leader of the Bible Students and founder of the Watchtower Society, visited Wisconsin as he travelled the country around the turn of the century.[5] The movement (renamed Jehovah’s Witnesses in 1931) expanded rapidly during the Great Depression and World War II.[6] As part of this worldwide expansion, Milwaukee’s first Kingdom Hall, located at 2404 N. 52nd St., opened in 1946.[7]

In the following years, Milwaukee welcomed Witness assemblies at the Auditorium, Arena, and County Stadium.[8] At least six large conventions were held at the Stadium from the 1950s through the 1970s.[9] These multiday events often featured mass baptisms at local swimming pools or temporary fonts in the stadium and attracted Witnesses from a variety of states and foreign countries.[10] The 1963 international convention had Sunday attendance of about 57,055—more people than the Stadium held during any of the Braves’ World Series games.[11] Miller Park hosted about 35,000 people at its first Jehovah’s Witness convention in 2014.[12]

Throughout the twentieth century, local Witnesses, like their coreligionists worldwide, faced legal challenges to such tenets of their faith as opposition to blood transfusions, refusal to swear allegiance to earthly institutions, and evangelization in the public sphere.[13] In many local cases, spanning from World War II through the 1960s, Witnesses were imprisoned for failing to report for military service or alternative work.[14] One local immigrant saw his American citizenship rescinded when he refused to swear an oath of service to the United States.[15]

Southeastern Wisconsin native Olin R. Moyle played an important role in the Witnesses’ legal defense when serving as the Watchtower Society’s chief lawyer from 1935 to 1939.[16] Moyle argued before the Supreme Court on behalf of the Witnesses and helped to guarantee the freedom to proselytize.[17] In 1938, he authored the Watchtower Society’s first guide for door-to-door missionaries, explaining the first amendment freedoms that protected their activities.[18]

Troubled by practices he claimed to have observed within Watchtower’s New York headquarters, however, Moyle penned an open resignation letter in 1939.[19] The Watchtower leadership denied these accusations and attacked Moyle in their publications.[20] Moyle sued the Watchtower Bible and Tract Society, winning $30,000 (later reduced to $15,000) in damages.[21]

Moyle was excommunicated from both the national and Milwaukee congregations. His split with the Watchtower leadership caused a rift within the Jehovah’s Witness communities of Milwaukee.[22] While most Milwaukee Witnesses remained faithful to the Watchtower Society, Moyle began an independent journal, The Bible Student Inquirer (later The Bible Student Examiner), which ceased publication in the 1980s.[23]