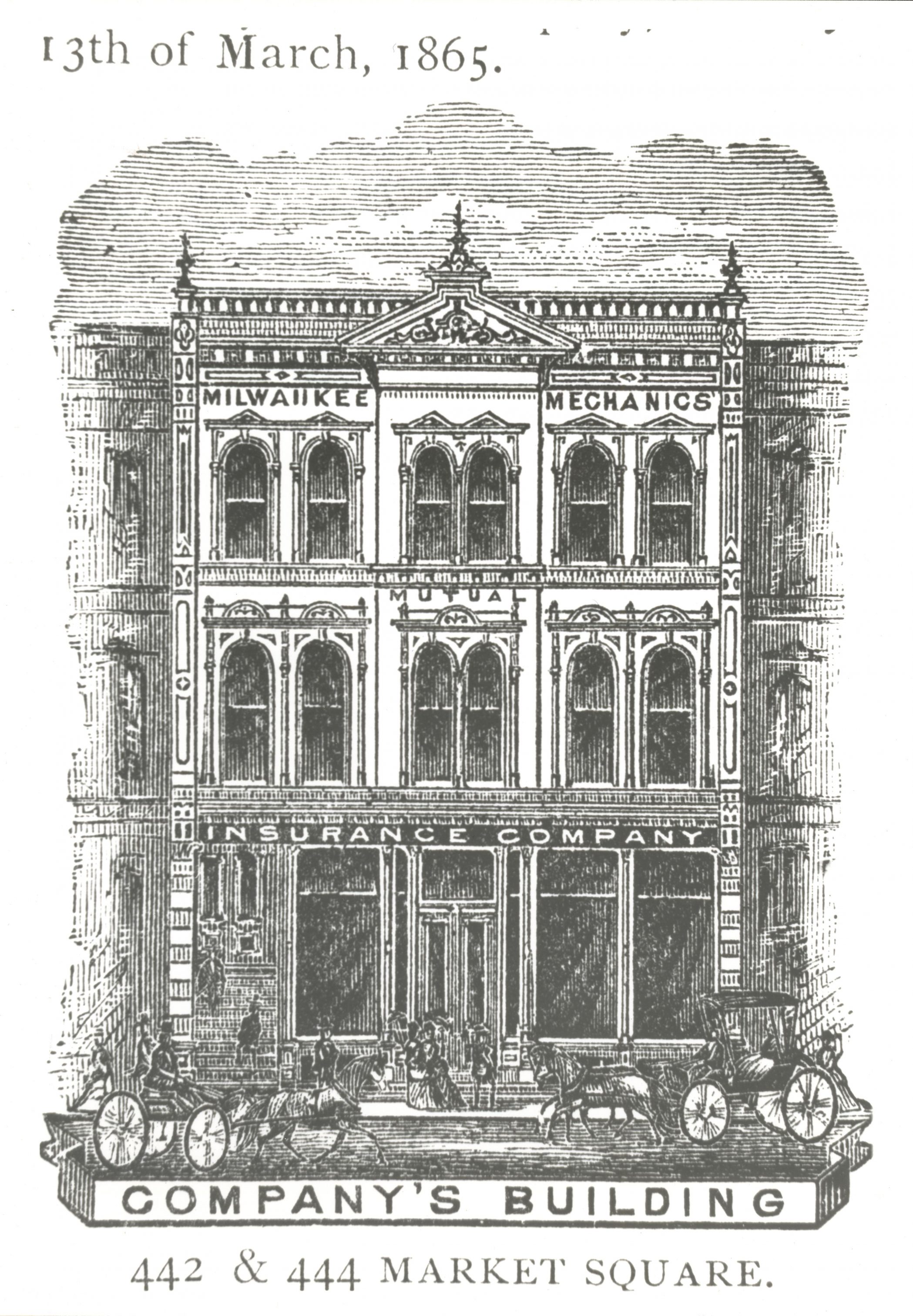 Forming in the years prior to the city’s charter, Milwaukee’s insurance industry became a key part of the city’s economy while several Milwaukee insurance firms grew into significant regional and national industry leaders. The area’s insurance companies not only provided important protection against calamitous loss of life, property, wages, and other investments, but also played a significant part in shaping the landscapes of Milwaukee and surrounding communities.

Although it is unclear precisely when the insurance industry first made an appearance in Milwaukee, experienced agents from New York, New England, and abroad were among the city’s earliest settlers. Seeing a promising insurance market in the bourgeoning frontier community, several hopeful pioneer entrepreneurs established satellites for major companies back East, or founded their own companies in Milwaukee during the 1830s and 1840s.

Prior to the widespread use of electric lights and steam heat, fire posed a particularly severe threat to the city’s predominantly wood-framed homes and businesses. Fire insurance became a key industry through the mid-to-late nineteenth century as a number of firms, including the Milwaukee Mechanics’ Mutual Insurance Company (established in 1852), Northwestern National Insurance Company (1869), and Concordia Fire Insurance Company (1870) followed Wisconsin Marine and Fire in providing residential and commercial coverage against the loss and damage from fire.[5]

Life insurance also became a significant part of the city’s industry, offering families financial compensation in case of the death of a policyholder. Milwaukee’s first life insurance providers were branches of major life insurance companies from New York, Philadelphia, and other industry centers back East.[6] Founded in Janesville by an experienced New York life insurance agent in 1857, the Mutual Life Insurance Company of the State of Wisconsin moved its operations to Milwaukee in 1859.[7] Later changing its name to Northwestern Mutual Life Insurance Company, this enterprise developed into Milwaukee’s largest insurance enterprise, and a national industry leader with agencies throughout the region and United States.[8]

While fire and life coverage remained key products, new market demands and legally mandated requirements prompted the expansion of Milwaukee’s insurance industry through the twentieth century. Organized in 1892, the La Crosse Mutual Aid Association of La Crosse, Wisconsin moved its operations to Milwaukee early in the next century. Renamed the Time Insurance Company, the firm was a pioneer in the health insurance field and grew into a leading regional provider by the 1960s.[14] The Dutch insurance company, N.V. AMEV, acquired Time Insurance in 1977, later changing its name to Fortis Health in 1997 and then to Assurant in 2004.[15] In the early twentieth century, the Wisconsin State Legislature passed landmark labor reform legislation, the Workmen’s Compensation Act of 1911, that made employers more liable for any injuries or death their workers sustained on the job. The Unemployment Compensation Law of 1932, on the other hand, required employers to provide financial relief to their unemployed workers. As a result, several Milwaukee area insurance firms offered local employers worker’s compensation and unemployment coverage in addition to their property and life policies.[16] As Milwaukee area residents increasingly owned and relied on automobiles for transportation through the twentieth century, area firms extended their product lines to cover damage and injury from commercial or individual vehicle collisions. The state legislature made auto insurance mandatory for Wisconsin drivers in 2010 after repeated attempts to pass such requirements in the state through the late twentieth century.[17]

Insurance also significantly promoted the development of the city and surrounding area. From the industry’s earliest days, firms such as Wisconsin Marine and Fire and Northwestern Mutual augmented their business through real estate investments and offering mortgage loans to local residents, businesses, and farmers.[18] Established in Milwaukee in 1957, the Mortgage Guaranty Insurance Corporation (MGIC) was a pioneer in providing insurance to local and national mortgage lenders that allowed families to buy homes with a lower down payment.[19] The industry also greatly contributed to the growth of downtown Milwaukee when firms built progressively larger office buildings as they expanded over time. The corporate headquarters of Northwestern Mutual and MGIC developed prominent parts of Milwaukee’s downtown skyline by the late twentieth century. Northwestern Mutual was also a major investor in the development of the Grand Avenue Mall in 1982 and other mixed-use projects in downtown Milwaukee in recent years.[20] Insurance companies’ classifications of neighborhoods also helped institutionalize and reproduce class and racial divisions as companies “redlined” areas and denied coverage to poor and racial minority groups they deemed to be too high-risk.[21]

Major area firms like Northwestern Mutual, MGIC, Badger Mutual, and West Bend have survived over the decades and thrived despite various challenges into the mid-2010s. However, citing losses from greater national competition and policy changes in the implementation of the Affordable Care Act of 2010, Assurant Health announced the closing of its Milwaukee offices by the end of 2016.[22]