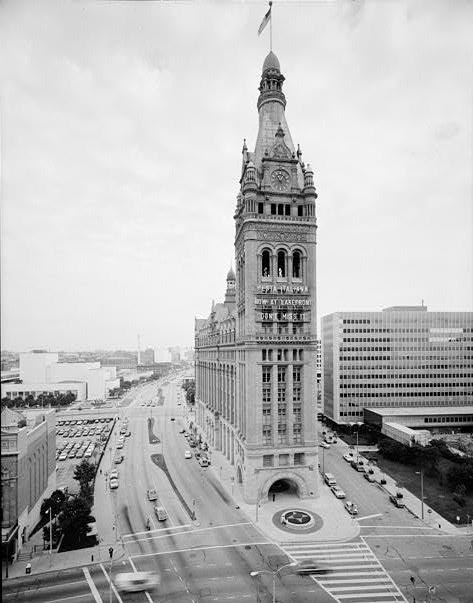 The Milwaukee City Hall is located on the site of the previous “Market Hall” on the triangular parcel of land between Market Street, Water Street, Wells Street, and Kilbourn Avenue. In 1891 an architectural contest was held to replace the “Market Hall” with a new headquarters for city government. Chicago architect Henry Ives Cobb submitted the competition’s winning design. But a political controversy led to the final selection of the design of local architect Henry C. Koch in March 1892. Groundbreaking began in June of the following year.[1]

The building was occupied late in 1895. Its bell, christened “Solomon Juneau” after one of Milwaukee’s founders, was placed in November 1896.[2] The style is Flemish Renaissance, with similarities to the “Rathaus” built in Hamburg, Germany at about the same time.[3] The triangular plan uses an asymmetrical design, with the main tower standing at the south end of the building. Now reaching a height of 393 feet to the top of the flagpole,[4] when it was constructed it was considered the tallest building in the United States.[5] In 2005 the National Park Service designated it a national historic landmark.[6]

In 2006, a major restoration project began to restore much of the building’s decaying terra cotta. The project replaced the old material with newly manufactured pieces. Work was completed in December 2008 but in 2011 sections of the new terra cotta broke apart.[7] Scaffolding was replaced around City Hall and the replacement of the faulty pieces was finished in 2014. 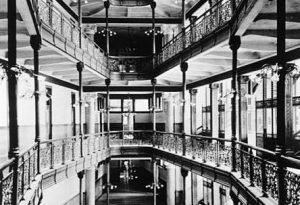 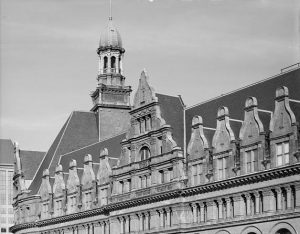